It has been great to read all of the comments on last week’s post about bad performances—I’m glad to see both composers and performers sharing their thoughts. In the interest of addressing both sides of this coin—or maybe that greener grass over there—I’m also interested in unpacking aspects of good performances. Yes, they do happen! 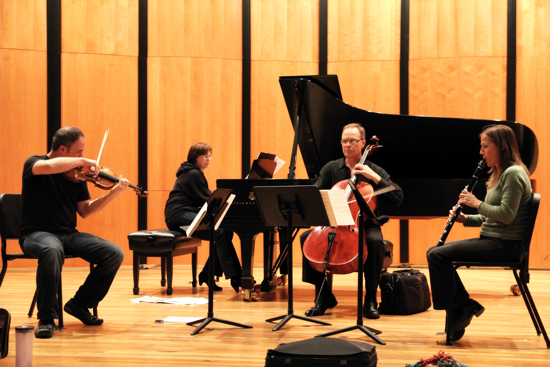 It has been great to read all of the comments on last week’s post about bad performances—I’m glad to see both composers and performers sharing their thoughts. In the interest of addressing both sides of this coin—or maybe that greener grass over there—I’m also interested in unpacking aspects of good performances. Yes, they do happen!

What about performances that turn out better than expected? A couple of commenters from last week shared stories of student groups giving performances of compositions that were surprisingly good because there was plenty of time to practice and fully absorb the music. What about performances that end up coming across differently than the composer expected, but that still work? Again, it does happen. One time, a performer I met only hours before a performance took a semi-improvisatory section of a piece in a direction that I had never considered. While for me it wasn’t necessarily the definitive version of the piece, it worked incredibly well! He made that work his own. When a musician spends enough time with, and thinks deeply enough about, a composition to drive it successfully off-road, you know you’ve found a good colleague. Similarly, on more than one occasion I have heard pieces greatly improved by performers who suggest small changes—a more dramatic shift of dynamics here, speeding that phrase up a bit there—which they think of during rehearsal. While I don’t always agree with suggestions for changes, I am always glad to listen to the ideas and try things out. Being flexible is part of being a good collaborator. Isn’t that what the composer/performer relationship is about?

While the “us vs. them” dichotomy between composers and performers is apparently alive and well, it seems highly unproductive. The last time I checked, we are all musicians. Maybe we are approaching the language of music from different standpoints, but we are all in the same field. I may not be a performer, but when I’m working with a musician or ensemble, I enter into that relationship with the expectation that we are all striving to reach the same goal. It doesn’t always work out, but even if it doesn’t, the world keeps turning. Both good performances and bad performances are a two-way street—it’s up to both composer and performer to work together to determine how things are going to shake out.

What performances of yours (either of works you’ve composed or pieces you have performed) have been really successful? Was there any part of the process that surprised you in a positive way? What does a successful performance really mean, anyway? How about those of you in the audience? What makes a performance successful in your eyes and ears?