When Do I Get to Stop Exposing Myself?

Some companies advertise the pieces we write for free as new commissions. I vote for an immediate end to this practice. By all means, call it a world premiere by the Next Important Composer of Our Time. Phrase it however you need to make it sound sexy and get butts in seats, but it is not a commission. It is unpaid labor from which others stand to gain. 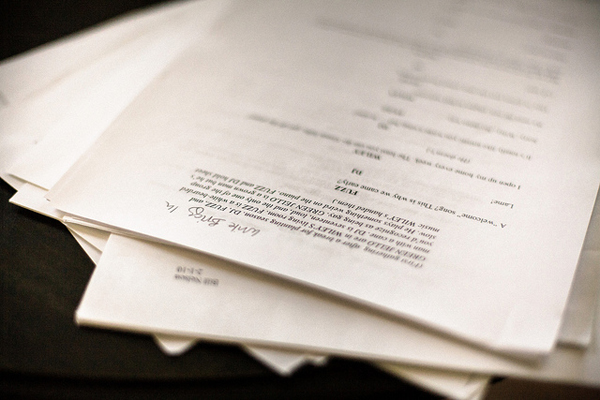 Starting out as creators of new music theater, we are never told the whole truth about what it means to be an “emerging composer.” Unknown writers have a series of hurdles to clear, many of which entail seeing projects to completion without seeing a dime, all in the name of “good exposure.” Constant self-producing and the seemingly endless development cycle take financial and emotional tolls that inevitably affect the writing process and our lives as a whole. At what point does our work finally carry universally recognized “value”?

As it has famously been said of other art forms, so too with the new musical or opera: it is never finished, only abandoned. The gestation period of a musical from a first informal table read to the big opening night may be a decade or longer: readings, workshops, maybe a small regional production, a move from Off-Off-Broadway to Off-Broadway to Broadway (in extremely rare and auspicious cases), several weeks of previews, and finally everything gets “frozen” for posterity and future productions. Along the way are rewrites, rewrites, and more rewrites following input from directors, music directors, choreographers, dramaturgs, performers, designers, and of course producers. Nothing about the work is certain until it is in front of an audience, and in the meantime the writers must keep guessing and second guessing. (The process of bringing a new opera to the stage may or may not be as lengthy, but the opera world has begun to take some cues from the musical theater world and has begun incorporating more readings and workshops into the trajectory.) As the economy and priorities of Broadway have shifted over the last couple of decades, full production opportunities have been supplanted by “developmental opportunities” (which are not the same as the extremely valuable training programs around the country which do nurture developing theater composers and librettists). Now the two-week lab, the 29-hour Equity reading, or the 16-performance showcase is usually the end of the rainbow, and the entities that supported those endeavors will not help nudge a piece any closer to the light of day. Writers are seldom paid during any of the developmental phases, even if everyone else around them receives at least a small stipend. But it’s good exposure—unless they are private readings just to hear the piece out loud (which, believe me, are crucial in their own way). Once the readings and workshops end with no supported next steps in sight, writers must take matters into their own hands and self-produce. Festivals only provide partial assistance, still leaving the authors to raise thousands of dollars to fight for attention in a sea of equally unfamiliar work. It is extremely difficult to find an independent producer willing to take a risk on a new piece if the writers are obscure and there is no other “brand recognition” associated with the show. And then some festivals have policies like this:

A minimum of one (1) paid audience member for each minute of your show…is REQUIRED. However, we really want you to pack our 99-seat house for your single performance. The more support you have in the audience, the more you’ll get out of your performance and talk-back, plus we’ll like you more. If you feel you cannot provide an audience for your piece, don’t apply… If the ticket minimum is not honored…the artist will be expected to make up the balance with a tax-deductible donation to [theater company redacted] on the night of the performance.

Here’s the icing on the cake: some companies advertise the pieces we write for free as new commissions. I vote for an immediate end to this practice. By all means, call it a world premiere by the Next Important Composer of Our Time. Phrase it however you need to make it sound sexy and get butts in seats, but it is not a commission. It is unpaid labor from which others stand to gain.

During this long, thorny uphill climb to a high-level production, emerging composers must constantly strive to have work heard as often as possible in whatever format they can find. Usually this means a song or short set included on a program featuring several different composers. Again, no pay but good exposure! Well, good exposure is relative to the resources the presenters (and the writers) have to get the “right people” in the door. And between cover charges and food/drink minimums, it’s easy to end up paying a lot of money to see your own songs performed. So how about self-producing a concert of your own work? After a host of expenses I probably don’t need to itemize for this readership, breaking even is a minor miracle, and simultaneously promoting and rehearsing the art creates a precarious time management situation.

Hence it becomes important to find a survival job. Beware, though: whatever you decide to pursue, among laypeople and established musicians alike, there will be a stigma associated with it. It’s understood, though no one says it in so many words, that any composer worth his/her salt writes toward fully staged productions full time, and the only other respectable source of income is a tenure-track teaching position at a university. Anything else means you’re doing something wrong. (Case in point: after each of the last few presentations of my work, someone has come up to me and said some variation of “You’re so good. What are you still doing at your day job?” It’s a compliment that stings.) In a country where the arts are not well financed (if they are financed at all) and the general populace believes that music just magically appears for free, this is simply not the complete picture. Faculty positions are neither plentiful nor optimal for everyone. If it’s a universally accepted truth that actors also wait tables, then why is it so hard to fathom that composers may do other things too? In addition to traditional gigs in the field—music copying/editing, musical direction, accompanying dance classes, subbing in Broadway pits, etc.—the composers and lyricists I know hold all sorts of survival jobs: writing copy for catalogues, assembling people’s IKEA furniture, fixing computers, babysitting, playing dueling-piano shows, and all manner of office positions at hedge funds, nonprofits, law firms, and more. I am fortunate enough to be employed at a place that lets me expand my knowledge of the operatic repertoire, work directly with many of my favorite composers, and acquire many life skills I would not have picked up while writing alone in my apartment. But that’s not appropriate cocktail party conversation. It is more important to appear sought after and busy with at least one high-profile project so those who can help us attain our aspirations will perk up and take notice. I look forward to a day when emerging composers can stop treating their day jobs as dirty secrets. Let us all please take a breath and acknowledge that we are not failing, but rather we have succeeded in finding a way to keep afloat in a difficult fiscal climate without sacrificing the core of our artistic lives.

In the end, though, the survival job serves the curious dual function of allowing us to and yet keeping us from concentrating on the music. We can pay the rent, take tiny monthly bites out of massive student loan debt, and even fund small-scale performances of our work every now and then, but there is a ceiling to what we can accomplish when our time and attention are so thoroughly divided. Composing is for evenings, weekends, and lunch breaks. A mentor of mine says that if you only have ten minutes to write, then you go deep instead of wide. But what if we never get to go wide and fully understand the complete pieces we are writing because we are always composing in the musical equivalent of sprints? A 9-to-5 commitment does not mesh with the majority of professional rehearsal schedules or the availability of most performers and creative staff; as a result, we may end up working with our third or fourth choices and compromising the best representations of our creations. If the day job does not offer enough flexibility, we may have to pass on certain opportunities altogether. There are residencies for which I never even apply because I cannot leave the office for two months at a time. Talk about good exposure—that’s an automatic wave goodbye to some prestigious resume credits. Then there is the sheer physical exhaustion that comes with the demands of two careers. If a piece is in rehearsal, we work days, rehearse nights, rewrite in the middle of the night, rinse and repeat until the show opens. I have no idea how people who take care of families even manage this. Survival jobs may sustain us on a basic level for the moment, but they are not a sustainable model for the long haul.

Of course no one in the world is required by default to love or pay for our art. And of course sometimes we really do begin new projects solely because we are burning to share something vital to us, and we find homes for them later. But if theaters or opera companies commit to presenting our work without offering compensation, and we say yes over and over again, at some point we are saying, “Take my work, which has no value.” If we say no, will anyone ever hear what we have trained for and labored over for so long? This is the emerging composer’s ongoing dilemma, and this is how it is possible to be an emerging composer at 40, 50, and beyond. Recently I said no to a “commission” for a new song cycle. I felt a twinge of regret, but I took solace in knowing that it would save me time for the other operas, musicals, and scores for plays I am already in the process of writing for no money, for the love of it, and occasionally for the exposure.