What Is Music’s Comic Book Superpower?

In a comic book or graphic novel, there may be little lines that suggest a tiny burst of noise or emblazoned effects—words writ large in blocky colorful type—that announce the intrusion of sonic events. Sometimes there are even actual musical notes. This week, Marc Weidenbaum explores what the reader “hears” off the page.

This is the third in a short series of essays about how sound is inscribed.

My eye keeps moving back to the top of the page, try as I may to make headway into the story. The narrative is going in one direction, but my eye keeps looping back. This occurrence is natural, even intended. What I’m reading is a graphic novel, and the reader’s eye is expected to move around. You read some dialog, and then look at a face. Or you look at a face, and then read some dialog. You linger on the backgrounds, sometimes washes of color and texture, at other times highly detailed renderings. You see something of interest, and your eye wanders back to see if there had been a hint of it you’d missed earlier on—sometimes on the page, sometimes further back. The word balloons are just part of the overall story. Sometimes the dialog has nothing to do with what’s on the page, instead setting the stage for what will be underway when you turn to the next page.

And dialog is but one of many potential sonic elements on a given page in a comic book or graphic novel. There may be little lines that suggest a tiny burst of noise, and there are emblazoned effects—words writ large in blocky colorful type—that announce the intrusion of sonic events. The spoken words’ tonality is suggested in various ways: lower case at times, versus the more standard all-caps; occasionally bolded terms, sometimes for emphasis, often for cadence; a bit of color here and there, perhaps to distinguish who is speaking; even a wavy effect as someone is winding down into sleep.

And then there is the presence of music. When I come across actual musical notes in a comic book, they sometimes break the narrative spell for me. I pause and wonder if I should enter them into a simple music app to hear whether they “mean” anything, whether they are actual music or just a graphic signifier of music. How music is displayed in comics varies by author and by artist (those not always being the same individual), by story and by genre, by publisher and by region. Sometimes music appears as notes, and sometimes it’s more abstract.

In the comics of Megan Kelso, for example, sound often takes on a physical manifestation. Now, sound is inherently physical—at a loud concert you can feel the beats in your chest and, even at its quietest, sound is a force being registered by the infinitesimal hairs inside your ear’s cochlea. In Kelso’s comics, the physicality of the sound is often emblematic of an emotional heft; it fills space as a physical object or a heavy mood might. A young woman, seen here in a short story from Kelso’s Queen of the Black Black collection, plays piano. The sheet music is in front of her, tellingly absent any visible notes. We’re not, as readers, to be distracted by literal melodies. Instead what we witness is unfurling ribbons of sound that emanate from the grand piano’s exposed cavity. Here they play a specific role, trying (and failing) to reach the young man seated in the room’s far corner: 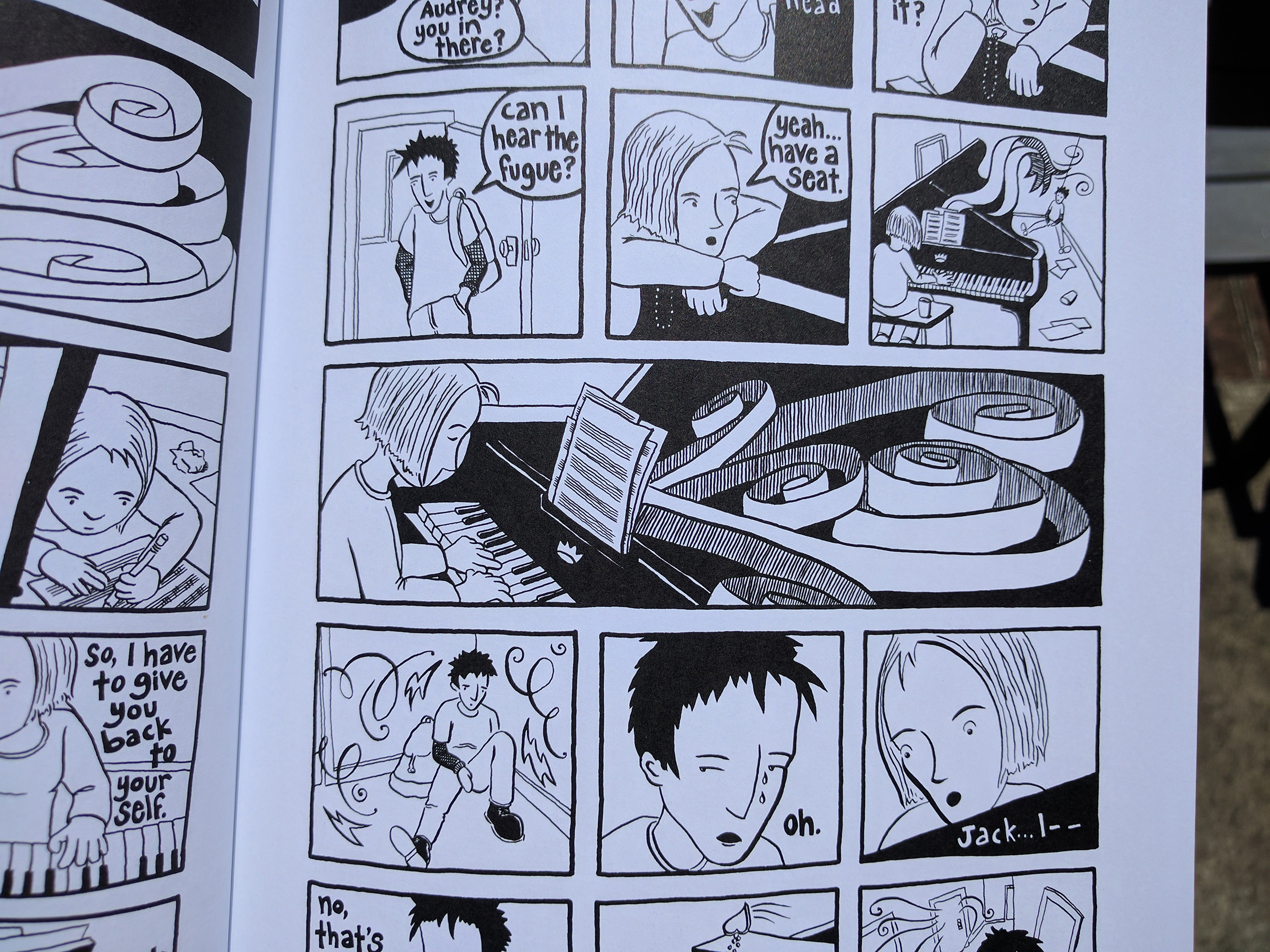 I spent many years editing comics about music. This was for Pulse!, the music magazine long ago published by Tower Records. I edited comics about music for the magazine for a decade, beginning with the contributors Adrian Tomine (when he was still attending high school) and Justin Green. Kelso was also among the contributors, along with many others, some early-ish on in their careers, like Jessica Abel, Brian Biggs, Ed Brubaker, Leela Corman, Tom Hart, and Frank Santoro, to name a few, and others further along, such as Peter Kuper, P. Craig Russell, and Carol Tyler. The Pulse! comics were about music, but they were so “about” music that how music was visually characterized wasn’t often the focus of a given piece. They were about the lives of musicians, and also about how audiences’ lives were affected by the musicians’ work.

How music appears in comics that are not entirely about music, how music appears as a narrative element of comics in general, is a strong interest for me. I read comics voraciously, and nothing slows my reading like the appearance of a few notes (or their suggestion through some other visual means) on a page. The presence of music in comics is far less codified than how action is portrayed, or facial expressions, or time passing, or distance. In this sequence from The Lagoon, a graphic novel by Lilli Carré, conflicting sounds appear, the snoring of one individual contrasting with another melodic thread. The transition in the woman’s face, as the sounds go from annoying to entertaining, caught my eye in particular. The two strains slowly merge, or at least make peace with each other, as the panels proceed: 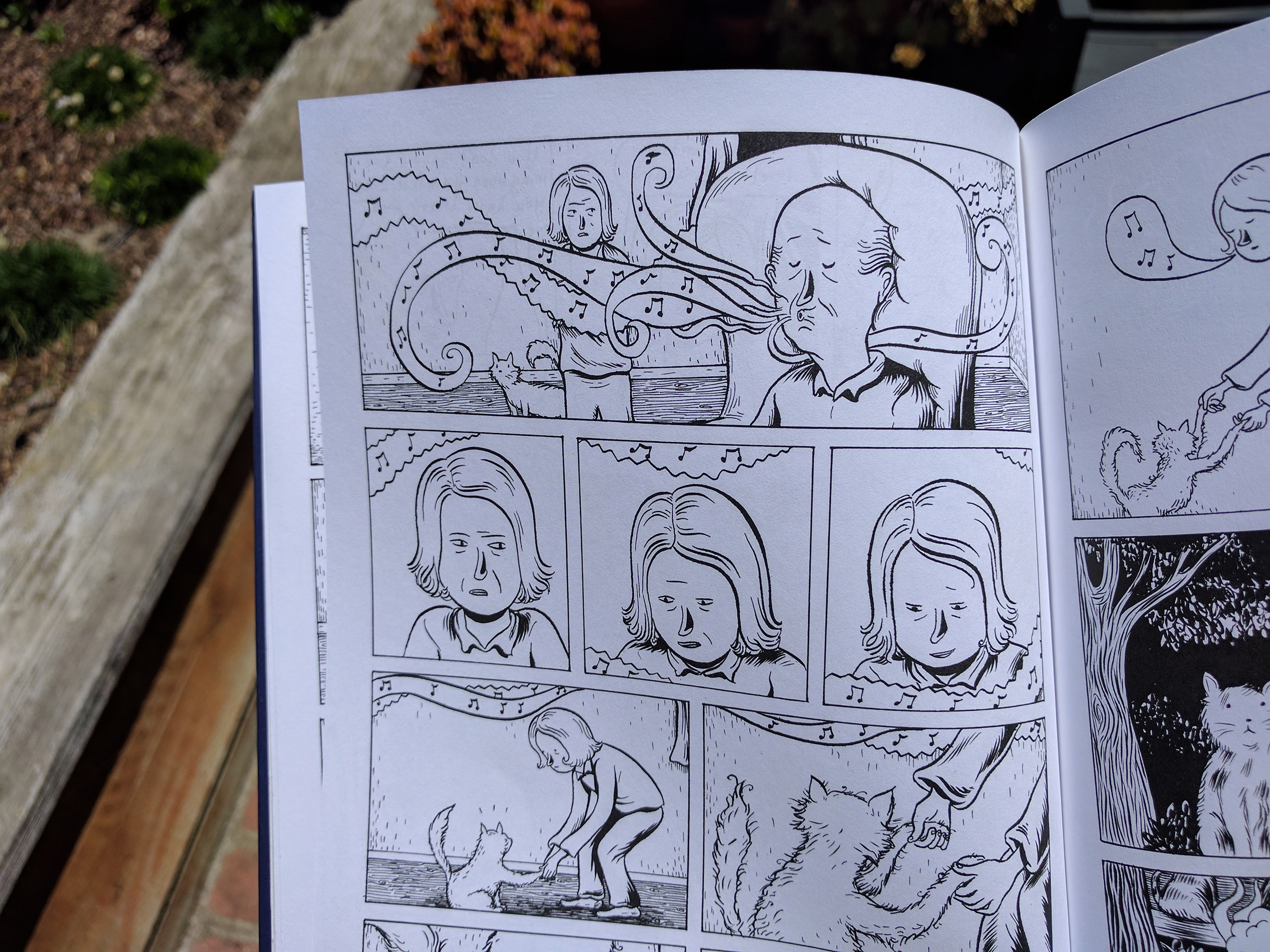 Music plays a unique visual role in comics. Much sound in comics is of an instant. Someone says something, and then it’s over. Someone makes a loud noise, and then it’s over. Many of the non-musical sounds in comics aren’t that different from the sound effects I marveled at in my youth, like this panel collected in Origins of Marvel Comics, a paperback compendium of classic comics. Here the Hulk does battle with Prince Namor, the SKRRAKK!, with its redundant yet effective exclamation point, serving as a massive onomatopoeia. 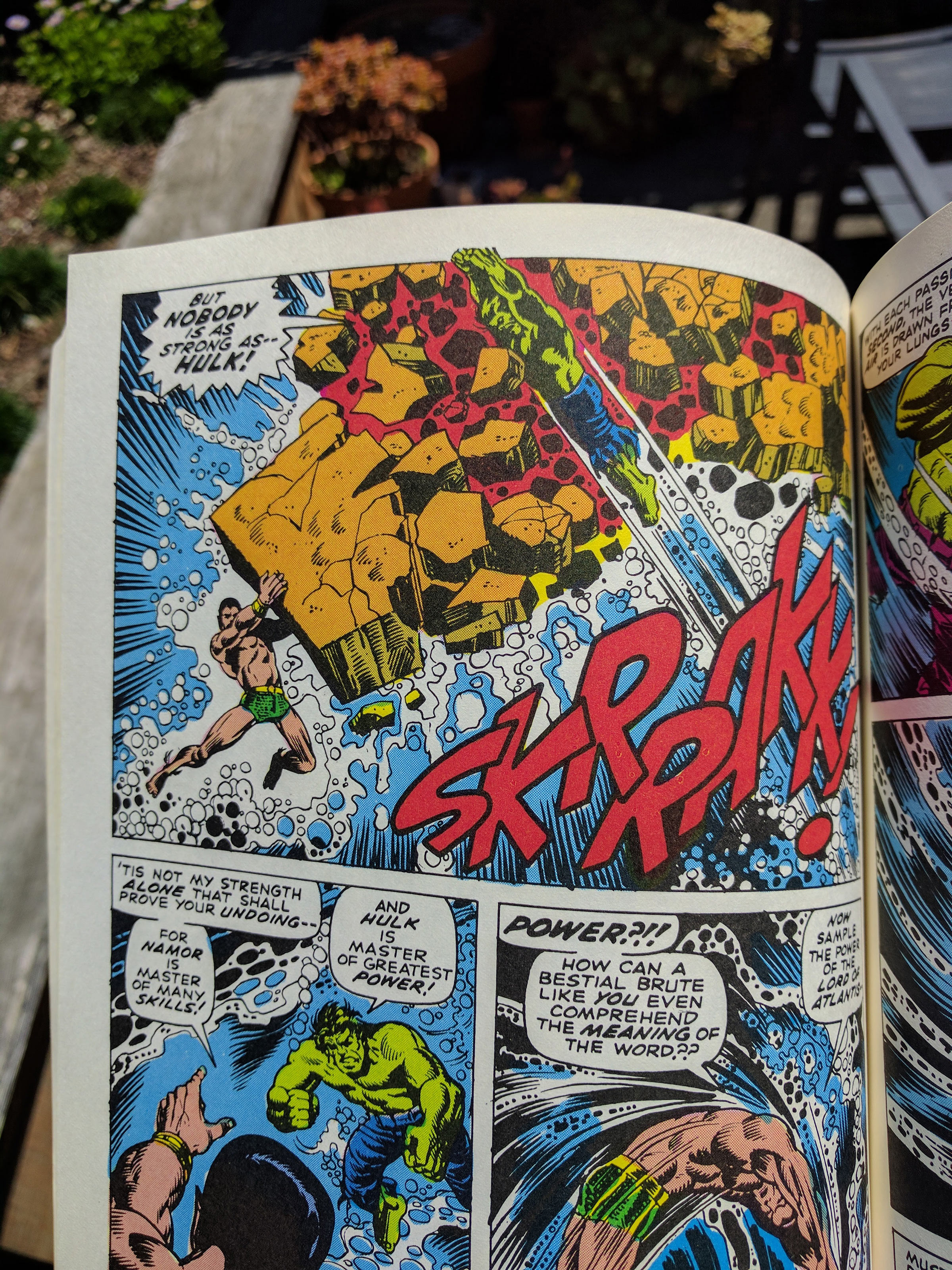 Comics take place, like music, over time, but comics are read as a sequence of still images, whereas music by its very nature tends to be visualized in a way that suggests continuity and flow. One of the things sound can do in comics, thanks to its necessary visual continuity—its tendency to be represented in streams rather than isolated instances—is to fill spaces and connect moments. This sequence in the first volume of Michel Fiffe’s Copra series is a fine example. Note how the source of the sound remains evident even as the sound moves from one panel to another and proceeds to inflict pain: 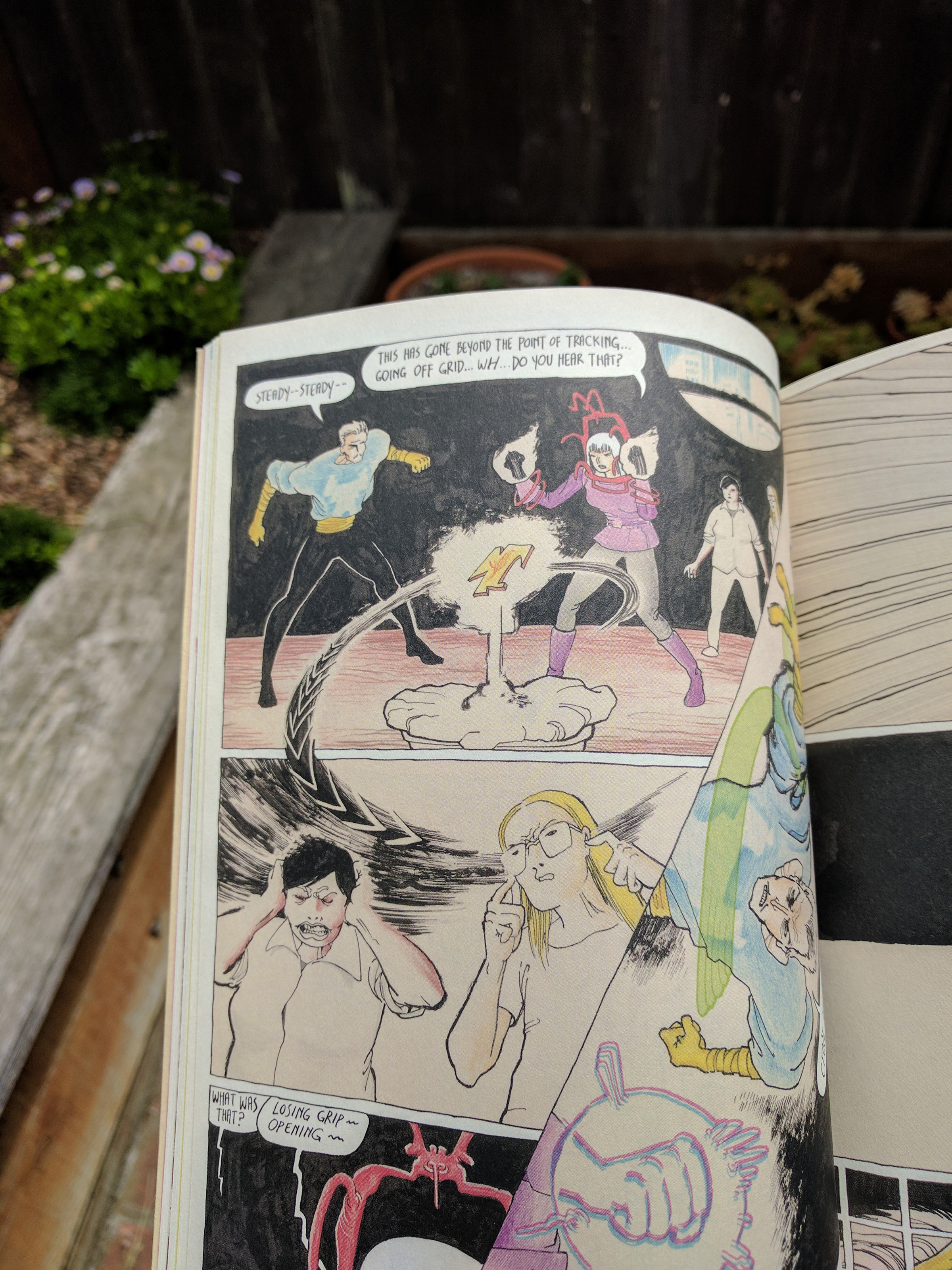 The presence of sound in a comic is not unlike its presence in a film. Sometimes its presence is documentary-like, a part of a scene, an act of naturalism or of set decoration, but often it reflects some individual point of view. In this scene from Charles Burns’s The Hive, a band is playing but the reader “hears” nothing, because no notes are visible. The protagonist’s mind is elsewhere, even as the quartet rages: 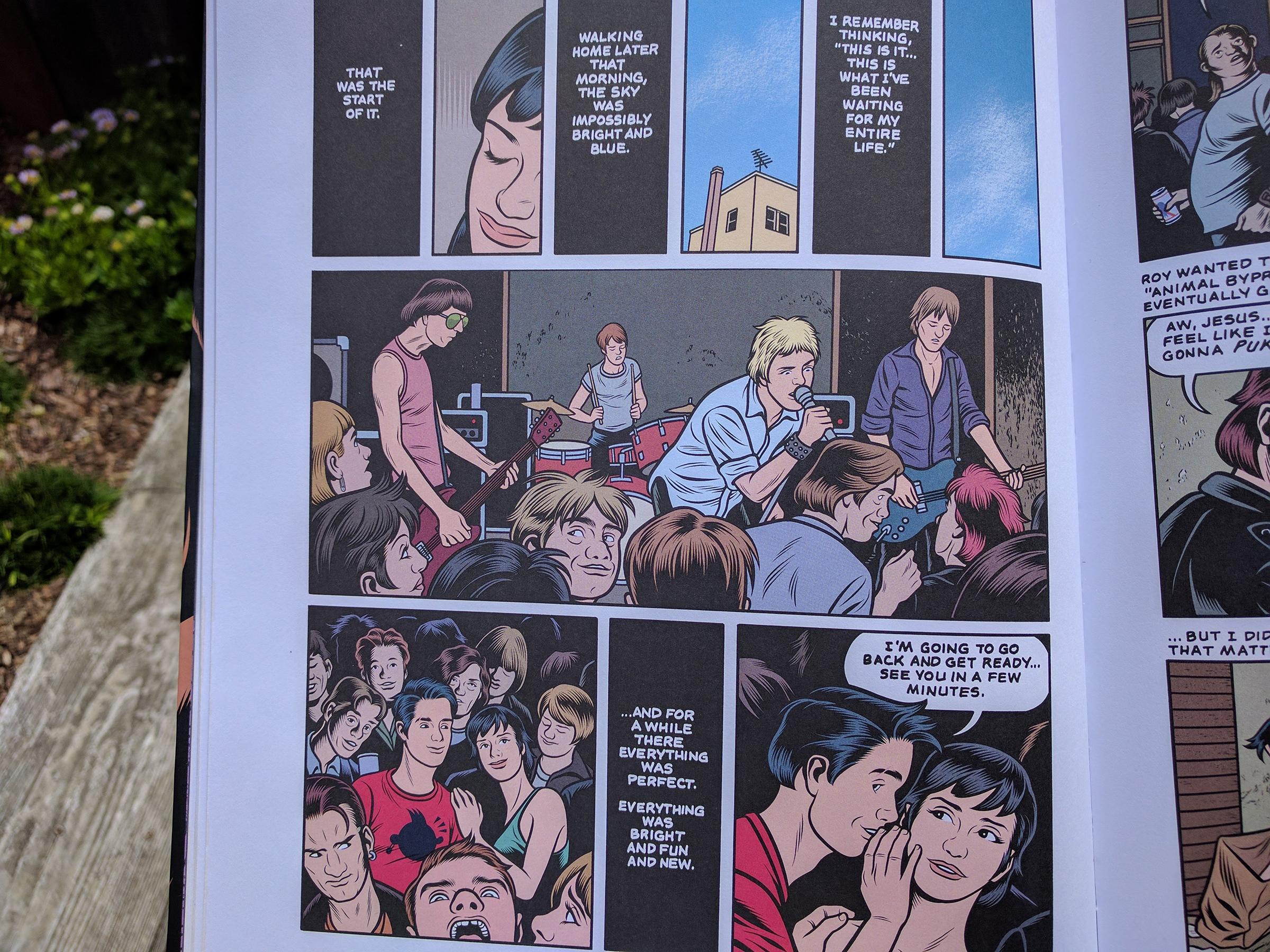 Music can serve a comic’s narrative, certainly, but it isn’t just there as part of the story. At its best, music is there as part of how the story is told. It isn’t there just to tell us something culturally about the characters or emotionally about the moment. In its best utilization, music appears in a comic as part of the illustrator’s graphic-language toolkit. This sequence from early in Get Over It, a breakup memoir by Corinne Mucha, does much in a tiny space—just two panels. We don’t come across the couple’s boombox until the second of the pair of panels, but then again the paneling is doing more than telling two moments in a sequence: it’s showing two individuals, destined for mutual heartbreak, across a divided table from each other: 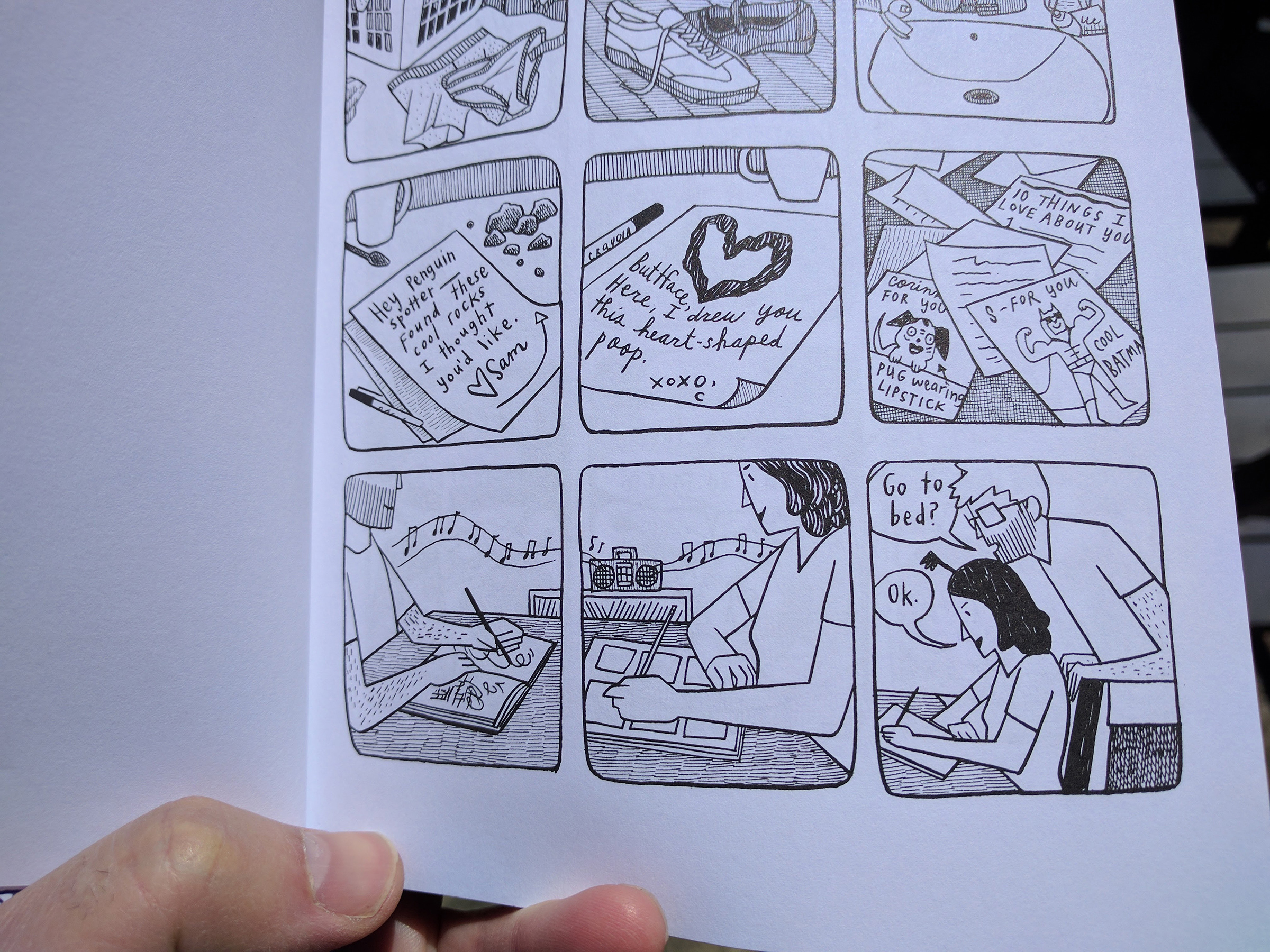 The music in Mucha’s scene emanates, as a traditional series of notes, from the pair of speakers, but the sequence makes no visual sense in purely literal terms: notes don’t enter a speaker on the left and then proceed to the right. What the music is doing is showing two people in close proximity who are already drifting apart. The elegant divide between the panels is in fact a fissure, the bit of musical confusion a symbol of unacknowledged dissonance. The divide between those two panels foretells where the story is headed. The way the divide asks the eye to briefly look back is instructing the reader to pay attention. The music isn’t just the soundtrack to the characters’ lives; its visual depiction is an intrinsic tool in the storytelling of those lives. Music doesn’t occur like the other sounds in a comic. It challenges the artist to reconcile its presence within the narrative. Its strength is how it resists submission to the micro-episodic nature of panel-by-panel storytelling. And when the creators rise to the occasion, it sings.