What Counts as Borrowed Material? 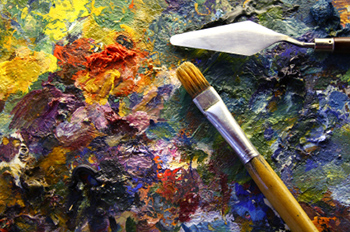 Four years ago, I wrote a chamber orchestra piece called Dayglo Attack Machine.  It wasn’t nearly as good as its title.

The piece explored territory that I’ve come back to many times:  intentional cheesiness, shiny orchestration, references to 1960s advertising and film music, and the blurry line between cheerful and alarming.  It even included a percussionist popping  colorful balloons with knives.  But in the end, it wound up seeming pretty tepid and uninspired, and I was left wondering whether I should pursue a different direction in my work.  Discouraged and frustrated, I asked a bunch of friends for their honest opinions of my music.  Reading the criticisms I got wasn’t always pleasant, especially since I agreed with some of them.  But the response I wound up thinking about the most is actually one that I didn’t agree with.  It was from a composer who said that while she liked my music’s collage-y, turn-on-a-dime syntax, she wished that I would use my own materials rather than borrowed ones.

I can see why someone would react that way to my work.  I make a lot of allusions, and often very obvious ones.  But here’s the problem:  what kind of material wouldn’t count as borrowed?  If Dayglo Attack Machine had used atonal harmonies rather than major seventh chords, nested tuplets rather than 4/4 syncopations, and sul ponticello string overpressure rather than doubled flute and vibes, most people wouldn’t describe that as using “borrowed material”—but it would be.  I didn’t invent that language any more than I invented the language of 1960s advertising .  And in fact, those materials are further removed from me culturally than the ones I used:  not only do all of them go back at least to the 1960s, but they’re also European rather than American in origin.

I’m not sure why so many people can hear young American composers using mid-century European avant-garde ideas and not think of it as borrowing.  It’s as if people think of the European avant-garde as something like an “indigenous culture” or “native language” for contemporary classical music.  But few if any of us grow up surrounded by Stockhausen and Penderecki.  I first heard them as a teenager, long after my brain had already been filled with the shiny, cheerful/alarming sounds of American TV and movies—and many people don’t hear them until later than that.

I don’t mean to pick on the composer who made that comment.  She was responding honestly to a question I had asked, and she actually wound up changing her mind after we talked about it.  But over the years, I’ve continued to think about that conversation, because I keep running into the same ideas.  For example, Garrett Schumann recently posted on Twitter that composers who use common-practice tonality should do so “thoughtfully” and “deliberately,” and be aware of the “historical and socio-political assumptions” involved in making that choice.  I’m all for thoughtfulness and historical awareness, but what strikes me is that I never hear anyone calling on composers influenced by Saariaho or Lachenmann or Ferneyhough to be thoughtful and deliberate in their use of pre-existing ideas.  It seems to be taken for granted in many new music circles that anyone who composes in a European modernist idiom is doing so because they’ve thought about all the possible options and made a historically informed decision to go with that one, but that anyone who composes in a tonal idiom is doing so naively.  The funny thing is, the assumptions that people make actually contradict each other.  If atonality, extended techniques, ultra-complex rhythms, and non-repetitive syntax really are the “native language” of contemporary classical music, then you can’t take it for granted that anyone who uses them is doing so after years of rigorous aesthetic soul-searching.  They might just as easily be doing it because it’s the norm in their musical subculture.

Just to be clear:  I’m not disparaging modernist music, and I’m not saying that American composers have to use materials that originated in America.  What I’m saying is that the whole question of what counts as borrowed material is a red herring, because any material you use already has a history.  It’s not that there’s no such thing as an original artistic voice;  it’s that having an original artistic voice has less to do with creating materials from scratch than with which pre-existing materials you choose and what you do with them once you’ve chosen them.  So let’s not perpetuate a double standard that asks tonal and pop-influenced composers to justify their language, while assuming that modernist ideas come pre-justified.  As any future historian will some day be able to tell you, we’re all building on what we’ve heard. 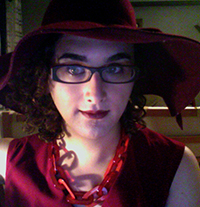 A sound can evoke a time, a place, a cultural moment, or a way of looking at the world. Alex Temple writes music that distorts and combines iconic sounds to create new meanings, often in service of surreal, cryptic, or fantastical stories. In addition to performing her own works for voice and electronics at venues such as Roulette and Constellation Chicago, she has also collaborated with performers and ensembles such as Mellissa Hughes, Timothy Andres, the American Composers Orchestra, Fifth House Ensemble, Cadillac Moon Ensemble, and Spektral Quartet. Temple earned her bachelor’s degree from Yale University in 2005 and her master’s from the University of Michigan in 2007; she’s currently working on a doctorate at Northwestern University and writing a podcast-opera about TV production company closing logos and the end of the world.