The conference is among the old guard of summer composer institutes and will celebrate its 70th anniversary next summer. Headed by Mario Davidovsky for nearly 40 years, the primary goal of the conference is to provide emerging composers with an opportunity to work with some of the best players from New York and Boston and to have their works performed and professionally recorded.

Nestled in the picturesque Wellesley College campus each summer is the Wellesley Composers Conference and Chamber Music Center, a two-week meeting of composers, professional performers, and dedicated amateur players who come together to live and breathe chamber music old and new. I was fortunate to have been invited to be a fellow at Wellesley in the summer of 2012 and to have been asked to return as a commissioned composer this summer, so let’s start with that full disclosure. The conference is among the old guard of summer composer institutes and will celebrate its 70th anniversary next summer. Headed by Mario Davidovsky for nearly 40 years, the primary goal of the conference is to provide emerging composers with an opportunity to work with some of the best players from New York and Boston and to have their works performed and professionally recorded.
To say that my time at the conference was positive is an understatement, but let’s talk for a moment about what goes on there. During the program, the fellows participate in daily forums in which they present and discuss their music with each other and the guest composers. Formal presentations concerning technique, performance practice, pet peeves, etc. are made by the staff instrumentalists, but the atmosphere is such that informal conversations during meals are common as well. Afternoons are populated with rehearsals for the various concerts that are held over the two-week period. The Wednesday and Saturday night concerts are the main shows and feature two or three works by the fellows, as well as a variety of works from the canon. 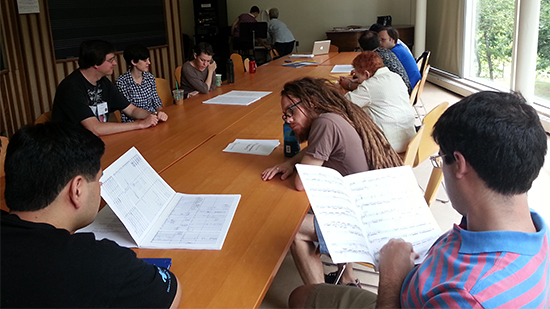 Fellows check out a few scores.
Photos by Andrew Sigler, except as noted.

Composers may write for any combination of the available instrumentation. This varies slightly from year to year but includes virtually all traditional instruments (though no harp presently, for instance) and tops out at chamber orchestra. The players are extraordinary and approach each piece with enthusiasm. Though the conference is all about new music, the concerts feature new works alongside well-known (and occasionally obscure) pieces from a variety of periods. When I attended the first Wednesday concert last summer I was preoccupied with the fact that my piece was going to be played that evening; I was sweating bullets, no doubt. When I sat down and looked at the program, I saw the other works to be played and initially thought, “Okay, a little Schumann, some Bach, some guy I’ve never heard of from the early 18th century. I’m sure it will be lovely, but aren’t we all here for the new stuff?” Then it occurred to me that I wasn’t going to hear just another run-through of one of the Brandenburg’s; I was going to hear a really good version of it. It added a whole new element of excitement and anticipation to the proceedings, and the players (while certainly top-notch new music performers) were also impeccable interpreters of the canon. 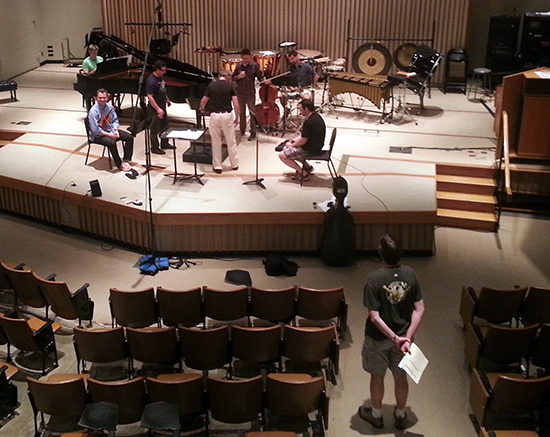 Thursday nights are reserved for presentations by the guest composers. Though these composers typically change from year to year, it just so happened that both years I’ve attended the guest composers have been Melinda Wagner and Eric Chasalow. The presentations typically involve a discussion of the composer’s life and work as well as a live performance of at least one work, as well as recordings of previous works. They are, like all of the concerts, free and open to the public. Wagner’s live piece, Wick for Pierrot plus percussion, was fast and furious with only a brief respite while Miranda Cuckson’s performance of Chasalow’s Scuffle and Snap exhibited her deft technique alongside his rhythmically complex fixed media. Past guest composers at the conference have included Milton Babbitt, Elliott Carter, George Crumb, Jacob Druckman, John Harbison, Lee Hyla, Earl Kim, Donald Martino, David Rakowski, Shulamit Ran, Gunther Schuller, Joan Tower, George Walker, Ollie Wilson, Charles Wuorinen, and Chen Yi. 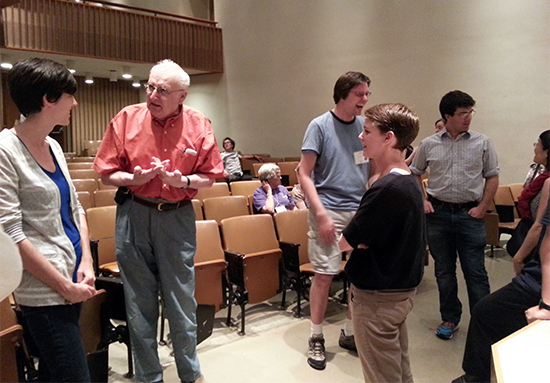 One of the particularly fun moments early on in the conference was when the group of fellows learned that public speaking was part of the fellowship. Tuesday nights are the “Meet the Composer” nights, and there’s nothing like a putting the spotlight on a bunch of nervous composers who spend much of their time working alone. Though the law of averages would seem to dictate a few awkward moments, all of the composers gave compelling snapshots of their backgrounds, the pieces to be performed at the conference, and their plans for the future. It’s good that these presentations happen relatively early in the conference as it presents an opportunity for the amateur players (“ammys” as they’re affectionately known around the campus) to get to know the composers and perhaps get a snippet of information that might spark a conversation at lunch. It’s been a long-standing goal to introduce the ammys to new music, since very few of them perform it with any regularity. The Chamber Music Center portion of the Wellesley experience is largely a separate entity in which these talented amateurs typically spend one of the two weeks (they rarely attend for both weeks) being coached by the professional players in several ensembles. 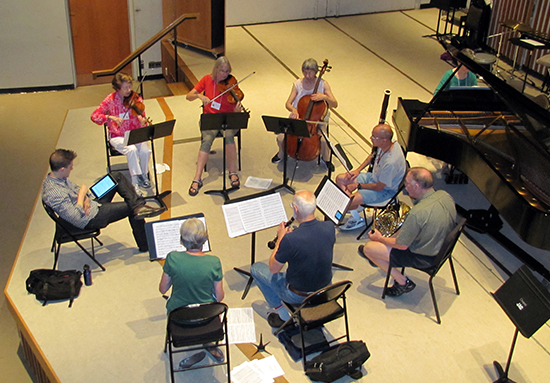 In 1987, the Chamber Music Center instituted a commission to be fulfilled by one of the ten fellows from the previous year. A panel of the ammys selects the composer to be commissioned. The first winner was Lee Hyla, and though his piece Anhinga was written for amateur players, it was well-received by the professional players as well and picked for performance more than once! Among the players I worked with on the commissioned piece this summer was violinist Joseph Singer. Joe has participated in the Chamber Music Center for 26 years and provided me with the following anecdote concerning his and other ammys growth as a result of the conference:

About fifteen years ago, one of the coaches was tired of hearing the amateurs complain about the new music and how dissonant it was. We came to the coaching session (the Scherzo of a Beethoven string quartet) and the coach gave us a line of music he asked us to play. We played it and were perplexed. It sounded familiar; it was the last line of the Scherzo but different; it was the same piece but it wasn’t the same piece. It was awful; it was sickly sweet and boring. “What did you do?” we asked. “You murdered Beethoven!” He smiled. “I changed eight notes,” he said. One by one he changed them back and we played the line each time, and each time it got better and better.
He was trying to make a point. Some of us thought we did not like dissonance, but he was showing us that what made the music beautiful, poignant, moving, what made it move forward and made us want to hear what was next, was—dissonance. It was the notes that did not “belong” that impelled the music forward and created tension that could then be resolved. So it was the structure that created expectations mixed with the dissonance that disrupted them, and all of this shaping moments in time.

Composer Jenny Beck, a 2013 Wellesley fellow, said of the experience, “The best part…for me was the emphasis placed on getting a good performance and a stellar recording of the pieces we had written. I think I can comfortably say that this was the best experience I’ve had working with an ensemble. Not only were they remarkably capable, but to have them display such commitment to the success of each piece was inspiring. James Baker’s rehearsal process is brilliant, and he seemed to know exactly what I wanted and what I was trying to do in the music without my having to say much. Finally, the recording engineer [Anthony Di Bartolo] handed my recording to me immediately after the concert: a flash drive containing the dress rehearsal and concert, broken down for mixing and also mixed together for immediate listening. You know how frustrating it can be to wait for a recording; it was really nice to skip that part.”


The flash drive was a new addition this year, but I can attest to the high quality of the performance and recording, as well to having been amazed that I got my recording (a fully printed disc with numbered tracks and the Composers Conference logo to boot) during intermission! The methodology of running and recording the dress rehearsal is the result of years of experience on the part of both Baker and Di Bartolo. Baker doesn’t simply run the works once or twice, he makes sure that each section is recorded such that alternative takes are available (and more easily spliceable) in the event that there are any issues with the live performance.

Again, the stated purpose of the conference is to provide the fellows with quality performances and recordings of their works, and if that was the extent of the offerings it would be time well spent. But the connections and friendships that are made are a large part of what I took from my time at Wellesley. I truly anticipated a more adversarial environment in which various camps and dogmas played a larger role, and while all the composers had distinctive sounds and strong personal opinions, the overall tone was supportive and genuinely inquisitive. Most people seemed as interested in hearing and learning about other people’s work as they were in discussing their own. The daily schedule was also thoughtfully constructed. A three-hour morning seminar (with coffee break!) followed by lunch, three hours of rehearsals for the fellows’ works (attendance encouraged but not required), dinner, then a concert or presentation provided just enough structure to keep us focused. But it was flexible enough that we could take care of upcoming projects, get in some practice, or just take in the picture postcard that is the Wellesley campus.

To cap it all off, there are the infamous nightly parties which are held in one of the larger rooms in the same dormitory where fellows, players, and amiss alike retire in the evening. Like any conference, having a few hours to unwind with your colleagues after a long day provides the perfect opportunity to really let one’s hair down. Discussions veer away from music in particular to life in general and back again. It was particularly nice to have frank, workaday conversations about gardening, exercise, and cooking with people who had negotiated one gnarly nested tuplet after another just an hour before.  War stories from the road gave way to the challenges of raising a family while maintaining a career. I heard more than one story about the role that Skype played in traveling musicians’ lives; about the quick and often harried trip to or from a concert to make sure that time with a partner or child would not be missed. These shifts from the sublime to the daily grind are not part of every career, and in the world of art the focus is typically on the former and rarely on the latter.  The Wellesley Composers Conference puts a frame around all aspects of this path, providing perspective on our present condition and giving insight into our future.