Some students operate on a different level from the others, hearing music in unique ways. I believe that it’s important for them to fully grasp the typical theories, if only so that they may understand the enemy against which they someday will rebel.

In a recent New Yorker magazine profile of Bruce Springsteen, David Remnick quotes Springsteen’s longtime friend and guitarist Steve Van Zandt as he describes their early attempts to cover the pop songs they were hearing on the radio:

“Bruce was never good at it. He had a weird ear. He would hear different chords, but he could never hear the right chords. When you have that ability or inability, you immediately become more original. Well, in the long run, guess what: in the long run, original wins.”

As someone who grew up with a pair of weird ears, I found this description to be heartening. 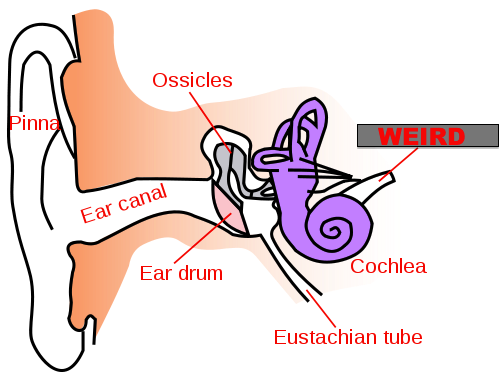 When I began exploring music, I experienced difficulty in playing the music of others. My inability to remember exactly what I had heard caused me to warp the tunes that I tried to copy. As I consistently failed in my attempts to replicate a style or a specific song, I began to realize that I actually preferred the new sounds that resulted from these missteps. I was unable to clone the pre-existing styles and this lack of skill became the basis for everything that followed. My music sounded original because I was constitutionally incapable of creating anything else.

Throughout my student years, I attempted to embrace my special background while simultaneously working to gain the skill-set shared by most other musicians. Although I didn’t need to worry that my compositions would mirror my favorite pieces from the repertoire, I also felt that there was a great gulf between the sounds I wanted to create and those that emanated from my earnest attempts at notation. Performers found that my compositions presented them with odd challenges and that they tended to be difficult to learn in inexplicable and unpredictable ways. Originality was never a problem for me, basic facility was.

Decades of training allowed me eventually to gain aptitude in typical musicianship; however, as my weird ears matured, they continued to resist strolling along the primrose paths prepared by others. Once I finally was able to clone music of the past, I began to see new possibilities for exploration that had been closed to me before. Having become somewhat competent at fully processing equal temperament chords and metronomic pulses, I realized that my musical ideals existed outside these systems. When I began, I was equivocating between the sounds I knew existed and the ones I wanted to hear; the training allowed me to understand that I had always sought something distinct from the music surrounding me. I had always assumed that my weird ears were a handicap; they turned out to be an advantage.

As a teacher, I try to keep this lesson in mind. Some students operate on a different level from the others, hearing music in unique ways. I believe that it’s important for them to fully grasp the typical theories, if only so that they may understand the enemy against which they someday will rebel. But at the same time, I try to learn from the way that they approach the repertoire, to hear the connections that seem obvious to them but evade the rest of us. These exceptional people can provide insights that have eluded the millions of normal ears that have previously assessed these compositions. The performers with weird ears can create innovative interpretations, and the similarly endowed scholars can refresh our analytic viewpoint.

It’s easy to award accolades to students who walk the straight and narrow path, who excel within the parameters established by their professors. It can be difficult to determine whether a new idea represents a brilliant re-thinking of centuries of precedents or a simple misunderstanding of the foundations of the field. People with weird ears generally try to function normally within society, but are unable to be anything other than original. Hopefully, Steve Van Zandt is right and in the long run original wins.