The killing of Ahmaud Arbery enraged me. The killing of Breonna Taylor broke my heart. The killing of George Floyd crushed me. My awareness of these three murders happening within such a close timeline really shook me to my core. It felt as if 2020 was hunting season for Blacks in this country. But then I remembered that 65 years ago, the attorney of Emmett Till’s confessed murderers warned an all-white jury that if they voted to convict, “Your forefathers would turn over in their graves.” Was this what the Framers intended?

As the pandemic raged like a biblical plague through Black and Brown communities, those in power downplayed the severity of the crisis. Death and despair circled around us, I became overwhelmed and fell into a depressed state. During this time, I came across James Baldwin’s 1963 essay “We Can Change the Country” and marveled at how many themes expressed in the essay paralleled the current moment:

“New York is a segregated city. It is not segregated by accident; it is not an act of God that keeps the Negro in Harlem. It is the real estate boards and the banks that do it. And when you attack that, that’s where the power is. For example, I ask all of you to ask yourselves what would happen if Harlem refused to pay the rent for a month. We’ve got to bring the cat out of hiding. And where is he? He’s hiding in the bank. We’ve got to flush him out. We have to begin a massive campaign of civil disobedience. I mean nationwide. And this is no stage joke. Some laws should not be obeyed.”

As protest and civil disobedience grew throughout the country in response to the murder of George Floyd, I, like many others, felt the twinges of hope and possibility. The streets were filled with people of all ages, colors, and creeds marching together to bring about change. Honest conversations about systemic racism and police brutality ventured into mainstream society. People all over the world took notice and staged their own protests in solidarity with what we were fighting for in this nation.

But, even as something beautiful and transformative was taking place, white supremacist groups, bad cops, and outside provocateurs began to infiltrate the protests to make them seem violent and criminal in nature. The bully pulpit was used to portray anti-fascism as bad for democracy, ignore acts of white supremacist violence, and label Black Lives Matter a terrorist organization. During a global pandemic, those in power made wearing or not wearing a mask a political statement.

I felt as if I was living in a never-ending nightmare.

Then John Lewis died, Chadwick Boseman died, and RBG died. The COVID-19 death toll reached 215,000 and continues to climb. Millions of Americans have lost their jobs, face evictions from their homes, and it goes on and on. All the while people in power dance on stage and say, “It is what it is.”

“We are living, at the moment, through a terrifying crisis, and let me try to put it in the cruelest and most abrupt terms that I can. Let us say that a hundred years ago, when I was technically emancipated from the land and given over to the landlords and the bosses – let us say that I was happy in my place and that I loved doing all that singing and dancing down on the levee. Now I, and my father and my grandfather, to say nothing of my grandmother and her mother, never for a moment believed that we were singing and dancing down on the levee because we were so happy, and not for a moment does any black man that I’ve encountered believe that he really was what the country said he was. But what has happened is that the country (by ‘the country’ I mean our government and most of our citizens) believes that I was happy in my place. They believe it so strongly that now they have the courage to ask, What does the Negro want? Well, I know what the Negro wants, and any man who is able to walk and talk knows what the Negro wants. If you know what you want, then you know what I want.”

In my piece, entitled We Can Change the Country, I create a compositional environment where a multiverse of boxes and zones carries the sonic textural language of varying perspectives. The instrumentation for the piece is ten voices, violin, bass, banjo, fife, drums, conductor, and film. Everyone is wearing masks, the vocalists are placed in social distancing circles, the musicians are spread six to twelve feet apart from one another, and a film beams light and images on the performers and the space. We Can Change the Country creates an environment of sensory overload as an attempt to reflect the mania-by-design of these past four years.

Just like this composition, America is a game where the rules and instructions are not the same for everyone. The majority of our so-called leaders currently in government don’t want to actually find solutions to people’s immediate needs and the systemic problems that created them. 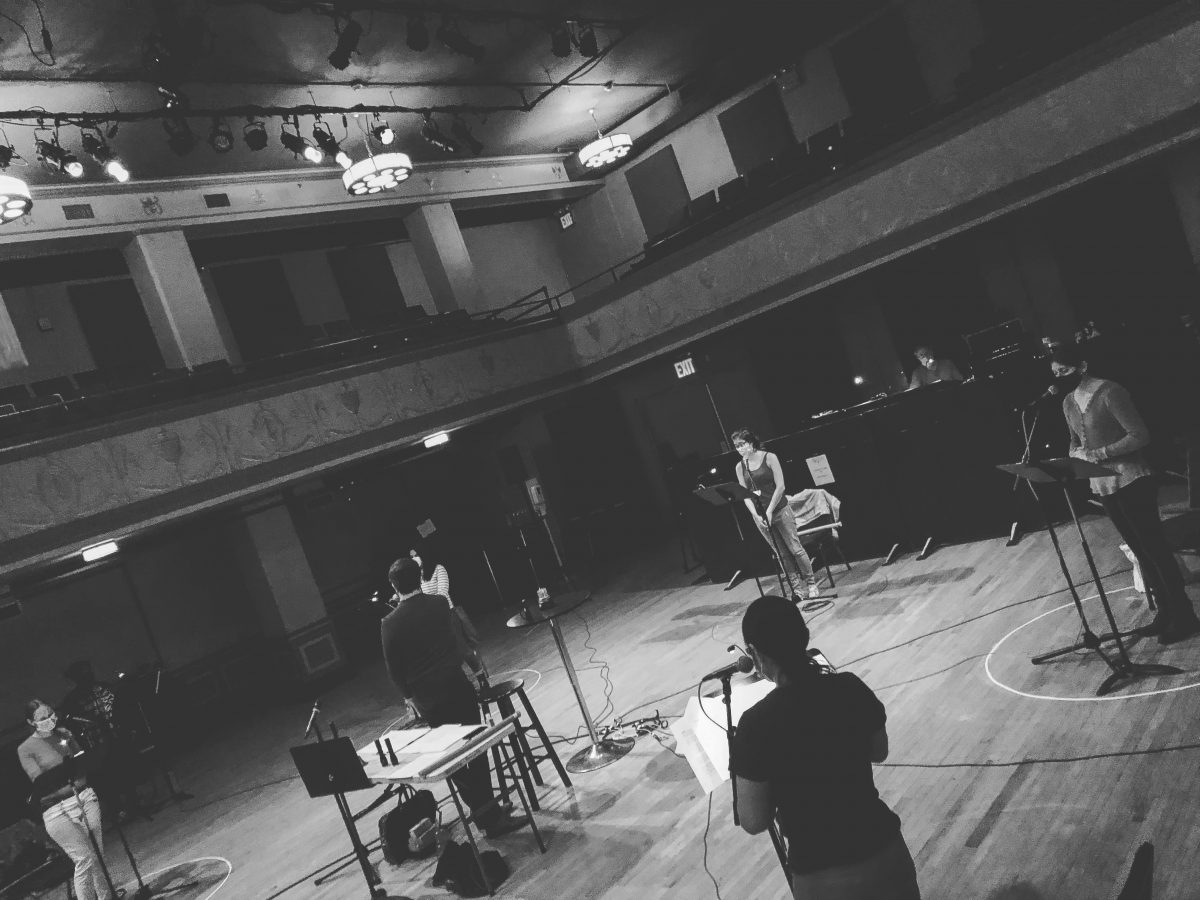 From the October 26, 2020 rehearsal of Darius Jones’s We Can Change the Country at Roulette. (Photo by Darius Jones.)

As the composer or Framer, I created the role of the conductor (leader) who oversees the implementation and direction of the musical content given throughout this piece. The conductor’s overall role is to create an environment where the performers (citizens) can be successful in their endeavors. For any given performance of this piece, the conductor’s (leader’s) own ideas and desires around the musical content will ultimately determine how the piece is interpreted. I as the composer (Framer) have relinquished control over this aspect of the piece. The overall quality of the performance (community) is dictated by the performers’ (citizens’) relationships to one another, their perspectives on the piece (Constitution), and the content (Rights) within. From my perspective, the Constitution is a living document similar to a guided improvisational score, but meant for a society.

This piece pulls text from the POTUS to Octavia Butler to Lalah Hathaway to a voter standing in line waiting to vote and puts them all together in one place, just like social media. My approach to the text is to create a timelessness within language. To present wisdom alongside madness and see which one will be heard through the noise is extremely fascinating to me.

The following statement is included in the Composer Notes for all of my social justice game pieces: This is not a composition; it’s a protest. This is not a performance; it’s a demonstration. This is a political work of art. I wrote it to express the hypocrisy of a nation that continues to deny its history, a history that has and will continue to define our future.

Even though this piece will be presented virtually this statement still stands firm. Transitioning to a purely virtual medium is tough, but in some ways, I look at it as an opportunity to create a truly ritualistic experience for the performers, while witnesses peer through boxes and screens to experience something that might terrorize or tantalize.

We are more than entertainers. Art, like protest, has a way of changing our molecular structure and our brainwaves. It opens our hearts and forces us to confront our empathy. It has the power to change the world and the world knows it.

As I write and amend this document, I realize that as a composer, and more so as a Black man in America, code switching is a constant interruption to my process, even as it affords access. My work is about combating apathy and fear. We Can Change the Country is not a neutral work of art.

A sneak preview of Darius Jones’s We Can Change The Country which will be livestreamed from Roulette Intermedia on Monday, November 2, 2020 at 8:00 p.m. Eastern Standard Time. Videography by Kenneth Jimenez.
We Can Change the Country was commissioned by Roulette and made possible with funds from the New York State Council on the Arts and New Music USA.