We Are the World
NewMusicBox
Written By

We Are the World

The International Music Council is designed to represent anyone involved in any kind of musical activity anywhere in the globe. However, in reality, the IMC has traditionally mostly attracted people involved with music education and representatives from national music councils. In addition to all the “official” musical ambassadors, the IMC’s World Forum for Music also attracted a handful of individual composers and musicologists, and it was nice to see that there was room here for everybody.

By the time you read this I will have already woken up for the first time in Oslo, Norway. Before I report on any of my Norwegian adventures, there’s still much to talk about from my time in Tallinn, Estonia. (In between visiting these two cities, I actually flew back to New York City for a couple of days—don’t ask, but hopefully it wasn’t long enough for my internal clock to reset itself to EDT.) Tallinn, Estonia, you may recall from my post last week, served as the host city for the International Music Council’s 4th World Forum on Music, an event whose central theme was “Music and Social Change.” Unfortunately I was not able to be there for the entire week, but I managed to soak in quite a lot of the experience for the brief time I was able to attend events (two days). 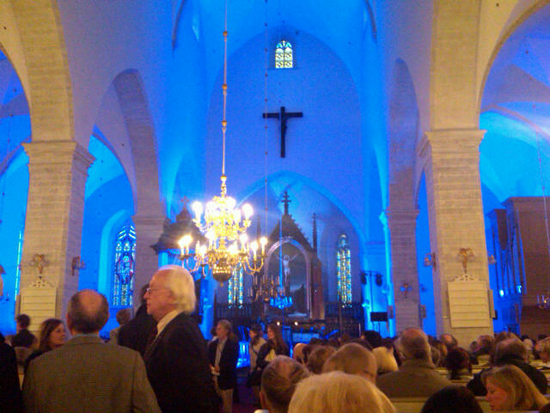 All three of these entities serve very different purposes. The ISCM dates back to the 1920s and its main activity is the international promulgation of—specifically—contemporary music, mostly through its annual World New Music Days festival which I attended in Zagreb earlier this year. The goals of IAMIC, which has been an independent organization for only a little more than 20 years, are broader and more specific at the same time. It is an association of organizations around the world like the American Music Center (soon to become New Music USA) which in some way document and promote the music of their respective countries. Some, like the Polish Music Information Centre and the Estonian Music Information Centre (both of whose offices I visited last week), promote exclusively so-called contemporary classical music. But others, like the Norwegian Music Information Centre, promote every genre of music from historic repertoire to black metal—but again, more on them next week. The IMC, on the other hand, has the broadest mandate of all in that it theoretically is designed to represent anyone involved in any kind of musical activity anywhere in the globe. It was created as part of the UNESCO Charter after the founding of the United Nations. 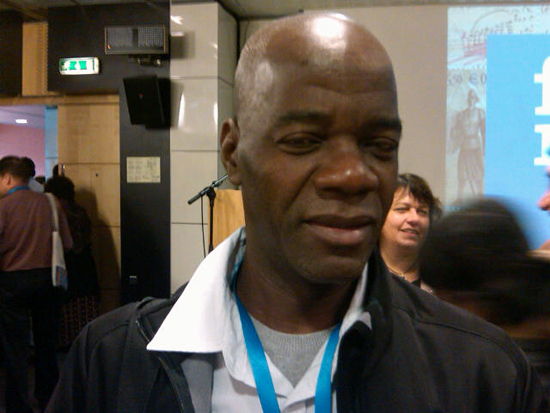 At present there is no official Cuban member of the International Music Council, but Cuban composer/arranger Raúl Guará Colas came on his own.

However, in reality, the IMC has traditionally mostly attracted people involved with music education and representatives from—in countries where they exist—national music councils, which are collectives charged to represent every aspect of their nation’s musical life. But, in addition to all the “official” musical ambassadors, the Forum in Tallinn also attracted a handful of individual composers and musicologists, and it was nice to see that there was room for everybody. I spent a great deal of the short time I was there interacting with people from the Americas who have a working group under the auspices of the IMC called COMTA, a Spanish acronym which translates to English as Music Council of the Three Americas. COMTA’s meeting was bilingual but Spanish definitely dominated and it was quite a surreal experience for me to be in Estonia attempting to introduce myself and explain what I do in Spanish.

There was something particularly poignant to watching a group of young Estonian percussionists taking the cue from a West African drummer at the opening session of the World Forum for Music in Tallinn. The future of music lies not only in the blurring of genres, but in the erosion of ethnic and geographic divisions between cultural traditions.
Education was undeniably the central concern at most of the sessions I attended. IMC’s Chair Franz Reuter, who used to run the Royal Conservatory of the Hague, pointed out during his address at the opening session that “young people are incubators for social change”; so any initiative involving music as a force for social change must have an educational component.

I was floored—as was everyone else I spoke to about it—by the presentation of Ahmad Sarmast, who runs the Afghanistan National Institute of Music (ANIM) in Kabul. Even if ANIM were exclusively a music information center, that alone would be pretty extraordinary, since the collection of traditional music recordings and rare musical instruments it houses had to be reconstructed from scratch over the last five years as a result of the Taliban’s large-scale destruction of anything having to do with music. But ANIM is also a learning center where young Afghanis, both male and female (which would have been unheard of in the past), can learn to play both traditional and Western classical instruments, and ANIM has also put together an orchestra of these young musicians who have toured throughout this war-torn country offering hope for a brighter future.

Luisa M Jorge Grullón, from the Fil-Armonia Foundation in the Dominican Republic, spearheads an El Sistema-like program in both the Dominican Republic and Haiti, a nation with which D.R. shares the island of Hispaniola. This is also something of a miracle considering the populations of these two countries have been segregated by political and cultural boundaries that were more impenetrable than the water that separates Hispaniola from the rest of the world.

Many of the speakers at the World Forum on Music pointed out, however, that 21st-century music education programs should no longer be so focused on Western classical music, especially in parts of the world which have their own traditions that are just as venerable. José Luis Castineira de Dios from Argentina heatedly argued that the typical youth orchestra model is a neo-colonial construct that leaves no space for contemporary creation or pride in one’s own heritage. The following question, which was reprinted in the abstract of his talk that was distributed during the session, offers a great deal of food for thought:

If we find a boy who plays drums excellently in an Escola do Samba in a favela in Rio de Janiero and we make a comparison with a boy who plays Mozart very badly in a symphonic orchestra of a social program, do we consider the second one as an integrated child and the first one as marginal? 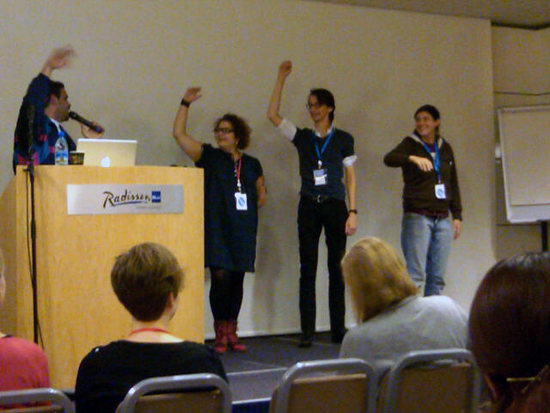 Australian aboriginal rapper Jimbla, a.k.a. James Alberts, gets delegates of the World Forum on Music to learn some basic hip-hop.

Wang Yaohua, from Fujian Normal University in the People’s Republic of China, talked about how traditional Chinese music cannot be properly passed down exclusively using Western teaching techniques, although Joe Tabula, from the Uganda Musicians’ Union, pointed out that we must find a way to bridge the gap between academia and practitioners; in Uganda, the trained musicians can’t get work but the self-taught ones do. This is true in many parts of the world. What does that say about music education?

Before I arrived in Tallinn I caught part of a performance of this drummer right outside the “Old Town” in Warsaw.
Gretchen Armussen, an American who is currently based at the Conservatoire national supérior de musique et de danse de Paris, talked about needing to turn our conservatoires into innovatoires. But even she admitted that it’s very difficult to change the entrenched behavior of what happens in a one-on-one teacher-student situation. Obviously, there need to be more opportunities for people involved in music from around the world to talk with each other and share there perspectives. The World Forum for Music didn’t have a large enough audience for it to be considered a quorum representative of the music community of the world at large; it would be impossible to have such a quorum in a physical space. But it’s a beginning.