Visitations: Theotokia and The War Reporter Premiere at Stanford University
NewMusicBox
Written By

Visitations: Theotokia and The War Reporter Premiere at Stanford University

Each of Jonathan Berger’s two chamber operas, Theotokia and The War Reporter, explores the interior psyche of men haunted by voices, presenting an expansive psychological inquiry in addition to a contained musical experience.

The first time I tried to find the new Bing Concert Hall at Stanford University, I wound up half a mile in the opposite direction and face to face with several of Auguste Rodin’s tortured sculptures. The Stanford campus is a gorgeous, messy sprawl in the rolling hills west of Palo Alto, and it is easy to lose all sense of direction there. Signs point to nearby buildings, but it can be maddening to find one’s way beyond what the eye can see. This, however, is the classic Stanford experience: amidst the miles of wild grasses and coast live oaks, intellectual ideas—in juxtaposition to one’s expectations and carefully crafted intentions—find a way of becoming novel interdisciplinary realizations. 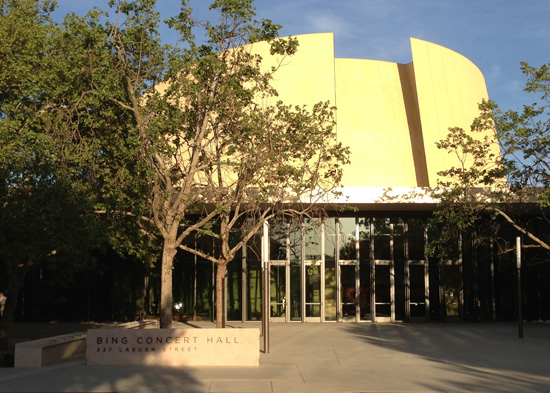 The intimate 842-seat Bing Concert Hall opened in January 2013 and hosted “Visitations,” a double-bill of one-act operas, on April 12 and 13.

Stanford was thus the perfect setting for the world premieres of Jonathan Berger’s two chamber operas, Theotokia and The War Reporter. Each work explores the interior psyche of men haunted by voices, presenting an expansive psychological inquiry in addition to a contained musical experience. Berger and his creative team, including librettist Dan O’Brien and director Rinde Eckert, treated this complex topic with an economy of means. Backed by an ensemble of nine instrumentalists, the four men of New York Polyphony, along with soprano Heather Buck, deftly covered all the singing roles. O’Brien’s lean text and Eckert’s straightforward direction also emphasized the intimate qualities of chamber opera. 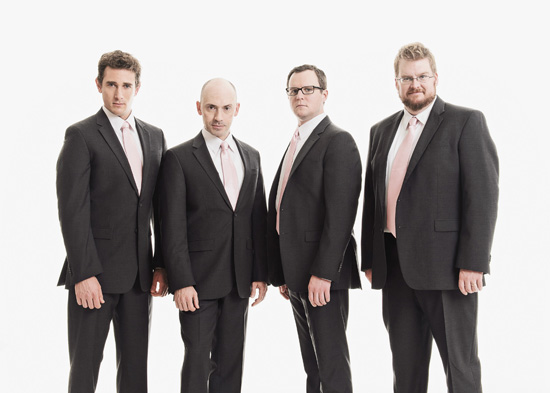 Theotokia, presented in eight brief scenes, eschews a traditional narrative arc for the fragmented world of poetry. Leon, performed by countertenor Geoffrey Williams, is a schizophrenic taunted by the voices of three religious figures (sung in virtuosic alternations by Buck). In the third scene, Leon, clothed in a drab, unbuckled straightjacket, expresses his frustration at not being able to quiet the voices though, significantly, not through song. Williams began quietly, tentatively rapping his hands against the sides of the resonant box on which he sat, before surrendering to more formal, frenzied rhythmic patterns. His fierce performance clearly suggested his character’s helplessness and anger; it was frightening. The opera concludes with Leon’s awareness that he is, in fact, mentally ill, and the final quiet notes played by the pianist underscored his resignation. 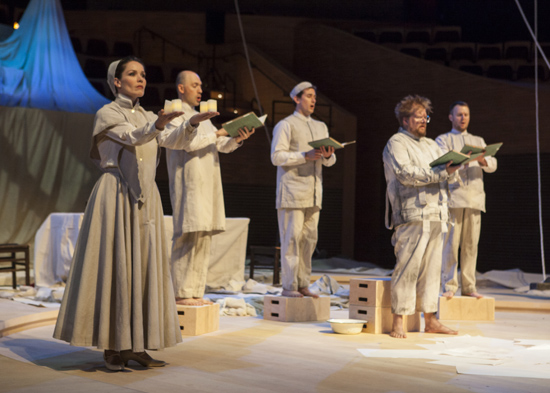 I couldn’t help but compare Theotokia to Pierrot Lunaire, since both works feature characters haunted by the machinations of their own minds. The tender sympathy I felt for Leon was mixed with a measure of distrust, a conflict of sentiments that I typically reserve for the dithering Pierrot. Perhaps aware that viewers might grow skeptical of a mentally unstable protagonist, Berger, like Schoenberg, calls upon the instrumentalists to hold the listeners in the psycho-musical realm. The instrumental writing fascinates at just the right moments, supporting what is otherwise a delicate psychological experience. I somehow didn’t mind when Buck’s Yeti Mother sang passionately about dung, so long as the piano conjured a smoky Berlin cabaret behind her. Steven Schick’s wild percussion solo transformed Leon’s earlier lament into what sounded like a masterfully improvised cadenza. And I held my breath as the violin (and then the clarinet) matched the pitch and dynamic of a fading vocal line, extending a thread of sound beyond what seemed acoustically possible.


Berger, who is a professor at Stanford’s Center for Computer Research in Music and Acoustics (CCRMA), surprised me with the subtlety of his electroacoustic soundscape. I’d anticipated a fully transformative ambisonic environment, but the materials used (bells, low-frequency metallic drones) were, for the most part, mere extensions of the instrumental parts. The refined blend between the acoustic instruments (particularly the percussion) and the electronic soundscape suggested that hallucinatory voices could present themselves as, simply, a distortion of what is already familiar. 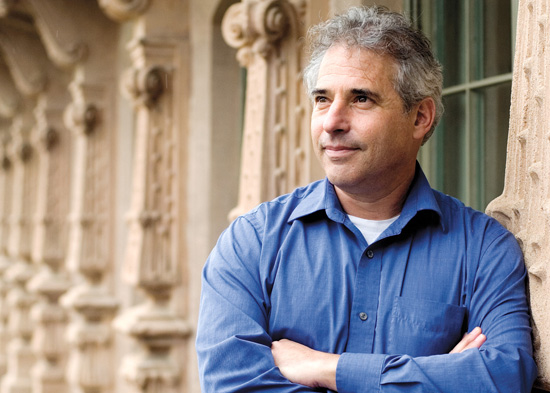 Berger is a professor of music at the Center for Computer Research in Music and Acoustics (CCRMA), where his research emphasizes relationships between music, science, and technology.
Photo by Nicholas Jensen.

In contrast to Theotokia’s candlelit Shaker simplicity and pale costumes, The War Reporter began with stark video projections and panning audio, and felt altogether more edgy and sinister. The men wore black suits. And sunglasses. The opera takes a direct narrative approach: from the opening line, “Have you seen the American soldier?” we bear witness to one man’s actions, as well the consequences of those actions both on his status as a photographer and on his psyche as someone racked with guilt. Finally, we recognize his attempts to make some peace with the demons in his mind.

Also commissioned by Stanford Live, The War Reporter tells the true story of Paul Watson, a photojournalist haunted by the voice of an American soldier he photographed while on assignment in Somalia. Baritone Christopher Dylan Herbert owned the role of Watson, singing in beautiful defiance of the capacity of a single human breath. Herbert sang through ends of phrases with seemingly infinite decrescendos, setting the listener adrift in the fog of his character’s mind. When a single instrument continues this thread of sound, it feels—as in Theotokia—as if time stands still. With curvy irregularities from floor to ceiling, the acoustics of Bing Hall may have assisted in drawing attention to these moments of close relationship between the vocal and instrumental parts. Yet I suspect the magic had more to do with Berger’s writing and Herbert’s performance than with the undulating panels of beech and cedar. 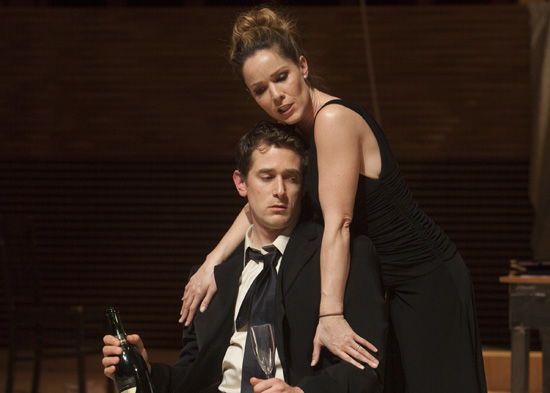 Christopher Dylan Herbert as photojournalist Paul Watson, and Heather Buck as his psychiatrist, in The War Reporter.
Photo by Joel Simon.

The premiere of the two operas was held in conjunction with Stanford’s “Music and Brain” symposium. Now in its seventh year, and held at CCRMA, the conference featured experts in the fields of psychology, music, and communications. Diana Deutsch, a professor of psychology at UC San Diego, was the first speaker on Saturday morning’s program, and her presentation included a definition of musical hallucinations in startling counterpoint to Berger’s operas. According to Deutsch, hallucinated music is virtually impossible to recall or imagine voluntarily because it generally consists of superimposed musical styles, cracked or distorted instruments, or “impossible” techniques, such as a person singing longer than a breath could allow.  Her description of these phenomena reminded me of Herbert’s performance as Paul Watson and of how his approach to the vocal line, in combination with Berger’s sleight-of-hand orchestration, effectively placed us in the faltering expanse of Watson’s mind.
One only needs to lunch with a member of the CCRMA faculty to get the sense that, at Stanford, music is never enough. It is always “music and —.” Music and anthropology. Music and psychology. Music and acoustic modeling. This view of music through the lens of the hard sciences sometimes strikes me as fantastic, but perhaps such interdisciplinary relationships are no more strange than those forged between music, art, and literature. Between the premiere of Berger’s operas, the symposium, and trekking from one end of the Stanford campus to the other, I was reminded that the juxtaposition of art and science, idea and exploration, yields results that are often as intriguing as they are unexpected.