Selected from a pool of over 80 applicants from across the country, Dan Visconti will be given the opportunity to work directly with the California Symphony and its music director Donato Cabrera over three consecutive years to create, rehearse, premiere, and record three major orchestra compositions, one each season.

The California Symphony has named Dan Visconti as their latest Young American Composer-in-Residence. Selected from a pool of over 80 applicants from across the country, Visconti will be given the opportunity to work directly with the orchestra and its music director Donato Cabrera over three consecutive years to create, rehearse, premiere, and record three major orchestra compositions, one each season. Visconti’s residency will begin in the fall and his first commissioned work, Power Chords, will premiere on May 1, 2015. 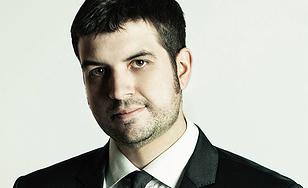 Dan Visconti (born 1982) composes concert music infused with the directness of expression and maverick spirit of the American vernacular. His compositions often explore the rough timbres, propulsive rhythms, and improvisational energy characteristic of jazz, bluegrass, and rock. Visconti studied composition at the Cleveland Institute of Music and the Yale School of Music, primarily with Margaret Brouwer, Aaron Jay Kernis, Ezra Laderman, and Zhou Long. Recent concert seasons have showcased several Visconti premieres, including a work commissioned by the Jupiter Quartet for the Chamber Music Society of Lincoln Center’s international string quartet series; a work featuring experimental video commissioned by the American Composers Orchestra for premiere at Zankel Hall; an extended work for cellist Joshua Roman and pianist Helen Huang commissioned by Town Hall Seattle; and a work for soprano Lucy Shelton and the Da Capo Chamber Players for premiere at Weill Recital Hall. His compositions have been honored with the Rome Prize and Berlin Prize fellowships, the Bearns Prize from Columbia University, the Leonore Annenberg Fellowship in the Performing Arts, the Barlow Prize, and the Cleveland Arts Prize; awards from BMI and ASCAP, the American Academy of Arts and Letters, the Society of Composers, and the Naumburg Foundation; and grants from the Fromm Foundation, Meet the Composer, the National Endowment for the Arts, and Chamber Music America. He has also been the recipient of artist fellowships from the MacDowell Colony, Copland House, the Lucas Artists Program at Villa Montalvo, and the Virginia Commission for the Arts. Visconti has additionally been awarded a 2014 TED Fellowship and delivered a TED talk at the 30th Anniversary TED Conference in Vancouver. Visconti was a regular contributor to NewMusicBox from 2008 to 2013.
Seven composers have previously completed residencies with the orchestra since the program was established in 1991: Kamran Ince (1991-1992); Christopher Theofanidis (1994-1996); Kevin Puts (1996-1999); Pierre Jalbert (1999-2002); Kevin Beavers (2002-2005); Mason Bates (2007-2010); and most recently D. J. Sparr (2011-2014).