When I was 16, Mark was like the big brother I never had. He was always a little larger than life. I had my first beer with him, my first cigarette. We’d stay up half the night on Fridays and Saturdays listening to Elliott Carter or Alban Berg’s Lyric Suite after having played quartets until we dropped.

[Ed. Note: Violinist Mark Sokol, a founder of the Concord Quartet and a persuasive advocate of music by American composers, died on November 28 at his home in Sebastopol, California. He was 68. In addition to being an important musician in his own right, he mentored many top players, including David Harrington of Kronos Quartet who shares his memories of Sokol below.] 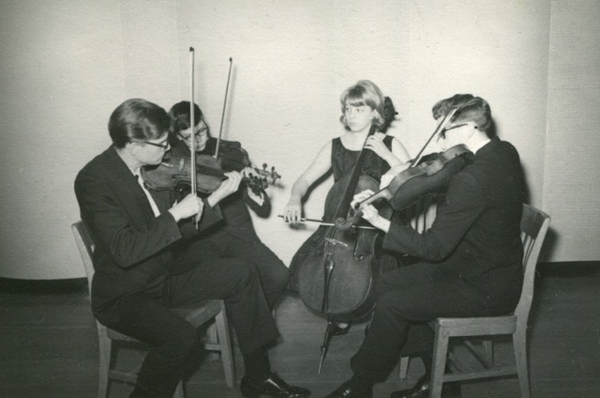 When I was 16, Mark was like the big brother I never had. He was always a little larger than life. I had my first beer with him, my first cigarette. We’d stay up half the night on Fridays and Saturdays listening to Elliott Carter or Alban Berg’s Lyric Suite after having played quartets until we dropped. He was a Juilliard Quartet fanatic and I got to know all of their recordings. We compared many performances of many groups. There was a time when I could pretty much tell any group on record by their sound. This obsession started at Mark’s place.

The instrument I have played in Kronos for nearly 41 years was the violin Mark played when he, David Campbell, Sylvia Spengler, and later Audrey King and I played together in the Jacovin Quartet. I played my very first world premiere with this group in 1965—Ken Benshoof’s Piano Quintet. We all played in the Seattle Youth Symphony conducted by Mark’s dad, Vilem Sokol, who was also both Mark’s and my violin teacher at the time. I might not have met Ken had it not been that Mark already knew him and had asked him to write a Piano Quintet.

Mark was borrowing the violin I now play from a foundation in Seattle. I always loved the sound Mark made on it. He had to return it when he went to Juilliard as I recall. I heard about this turn of events and then got to use the violin. Later the foundation went out of business and I was able to buy ‘my’ violin for $1,200, most of which Regan (Harrington) earned as a hotel maid at the Meany Hotel where Bartok had stayed when he came to Seattle in 1945.
Mark went off east to study, later formed the Concord Quartet, and had a very successful career for many years. I learned a lot from the trajectory of his work. The Concord Quartet was a Naumburg prize winner, got a management contract and was very prominent. The group had a close connection to Robert Mann of the Juilliard Quartet. In fact, Mark named his first child Robert. I think Mark eventually found a way to ge

t a Stradivarius. Meanwhile, I was making an in depth study of various quartets and how they all negotiated our society.
Kronos got started in Seattle in 1973, and the path I chose was much different—more home-spun, working from things I knew and then moving out from there. The first piece written for Kronos was Traveling Music by Ken Benshoof, who has remained my close friend and was even my composition teacher. Mark and I had several meetings and calls over those early years of Kronos. I remember once he came to our apartment in Seattle and brought an LP of the Concord Quartet’s performance of George Rochberg’s String Quartet No. 3 for me and we listened to it together. What an astonishing recording.

Eventually he came to San Francisco and taught at the San Francisco Conservatory of Music. The last time I saw Mark was at an Afiara Quartet concert at the Conservatory on 19th and Ortega. That’s quite a while ago now. He had recommended to them that they call me regarding Peteris Vasks’s String Quartet No. 4, which was written for Kronos and which he was coaching them on. That’s how I ended up working with the Afiara.

I wish that Mark and I had been able to be closer these last 25 years or so. But there is no way to force that sort of thing.
Music has lost a really vital, passionate force. 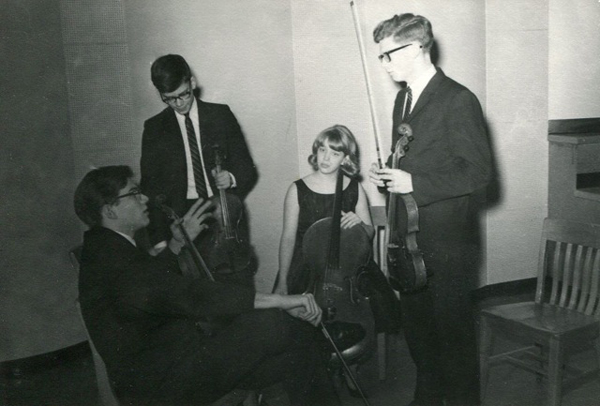 Another photo of the Jacovin Quartet, circa 1966. (Mark Sokol is on the far left.) Photo courtesy of the Harrington family.