Victoria Shen (a.k.a. Evicshen): The Landfill of Meaning

Victoria Shen’s needle nails technique, which was appropriated earlier this summer in a Beyoncé video, is just one of many new approaches to making sounds that Shen (who performs under the moniker Evicshen) uses in her provocative performances and installations.

Beyoncé’s latest album Renaissance made international headlines last week when Australian disability advocate Hannah Diviney called out one of the album’s songs, “Heated,” for using an ableist slur in the lyrics and Beyoncé subsequently agreed to re-record the song without that word and replace the track. Earlier this summer, the electronic music community was up in arms when an advance promotional video for that album made for British Vogue showed the pop icon scratching an LP with her fingernails. It turns out that it is a performance technique created by San Francisco-based experimental artist Victoria Shen, who performs under the moniker Evicshen, and she was not credited. But soon after the outcry, the appropriation was acknowledged and Shen was offered an apology. Both of these stories show that even if Beyoncé’s creative team is not always completely careful choosing all the details, they are paying very close attention to how people are reacting to her work on social media. And in Shen’s case, it actually gave her a new level of notoriety. 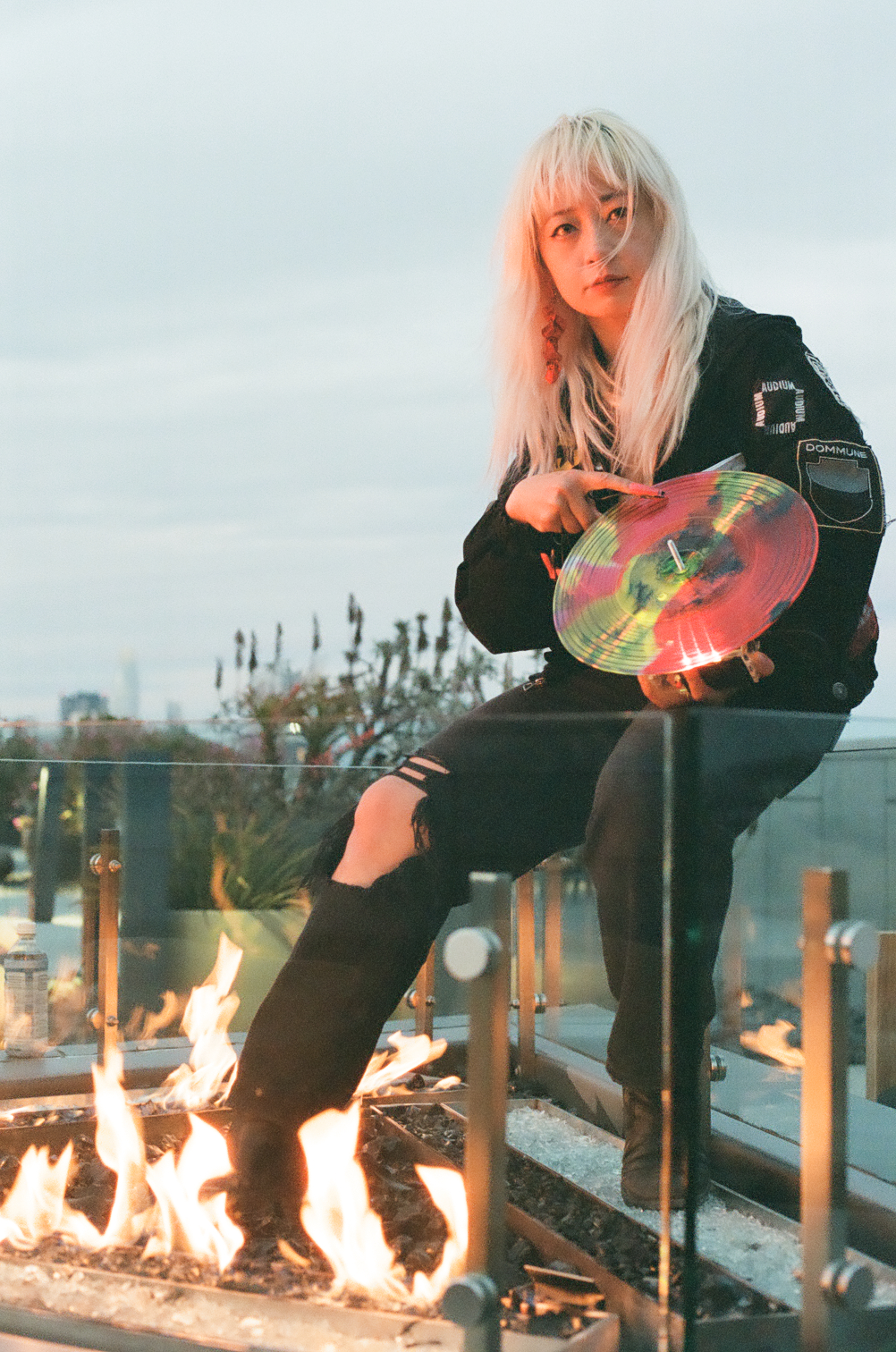 “The fact that my work was able to reach a much broader audience than I would have been ever able to have, even if it wasn’t credited at first, I think, is kind of amazing,” Shen said when I spoke with her over Zoom a few weeks ago during her residency at Wave Farm. She also pointed out that the concept, while visually startling and aurally fascinating, is perhaps not the most radical idea. “It’s just kind of like a natural thing. I also used to do nails, so this is a kind of thing where you think somebody would have done this already. It’s sort of low hanging fruit. But of course it takes both someone who used to do nails professionally and does electronics that had to make the bridge.”

As I would soon learn upon digging deeper into Shen’s creative output after she was first mentioned to me by my New Music USA colleague Ami Dang, who also creates electronic music and is a huge fan of Shen’s work, the needle nails technique is just one of many new approaches to making sounds that Shen has used in her performances and sound installations. After hearing and watching a segment of her extraordinary Zero Player Piano, in which disembodied piano strings and hammers are positioned along an ascending staircase and triggered remotely, I knew I had to talk with her.

“That was the gateway into more physical, electro-acoustic things I’m interested in now,” Shen explained. “To me, it was definitely a Modernist strategy … Something that’s self-reflexive. Something that is medium-specific. Like: what is a piano? How far can you push it to its logical conclusion while still maintaining we’re still arguing that it is within the medium of piano?”

Although some of her work can sound quite austere at times, Shen is ultimately suspicious of Modernist aesthetics. “I do like the Modernist kind of mission,” she admits, “but I know that it ultimately fails because all value divides contextually, arbitrarily. It could go in one eye and go out another, or it could be worth something based on some arbitrary factor which is like some institution assigns value to it. Or some kind of cultural capital gets ascribed to it. That’s bullshit. And we all know that, so how can we use things that are hyper, or super full of meaning, I call it the landfill of meaning. I use that in some recognized tactical way. I think I try and create this interface between non-meaning, that which is noise, and that which is over filled with meaning, and then take that interface, that line, and mine that for different conclusions as to how we derive our sense of value.”

Shen is also ambivalent about whether or not she is a composer, even though all the sounds she makes are completely her own, often including all the devices she uses to make them.

“I’m not a composer, I think mainly due to the fact that I don’t work with other people. I think composers really shine when they’re able to provide a set of instructions for other people to execute their work. … I think I’m much more of an improviser than a composer. I think part of composition, at least traditionally, is all about having a pre-packaged work being shipped out and executed, realized anywhere. And so for that, you want to control expression of your piece. You want to control the space in which it takes place. And it’s all about control, control, control. To me, it’s sort of the McDonald’s of sound.”

As for Beyoncé, Shen remains a fan though she doesn’t imagine that the two of them will ever collaborate.

I really doubt that she even knows I exist. I think her PR person knows I exist, but that’s as high as it goes. … I would just love to play at her mansion, to play a pool party or something with needle nails, it would be great. 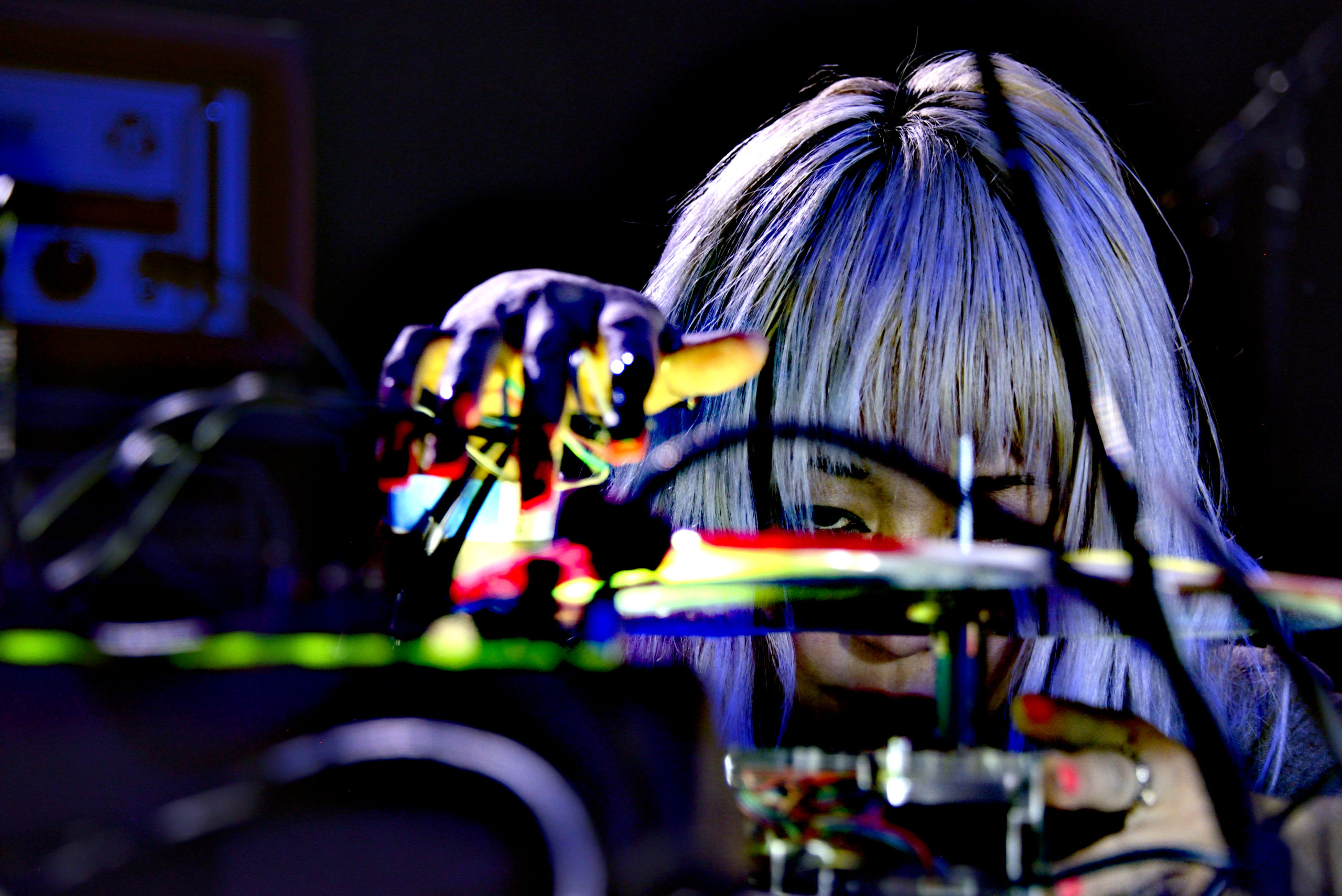 Victoria Shen (a.k.a. Evicshen) during a performance on February 23, 2022. (Photo by Matt Miramontes, courtesy Victoria Shen.)