Vessel, a recent concert presented by the Convergence Vocal Ensemble, featured an evening of commissions for four voices combined with a variety of instrumental combinations, including new instruments created specifically for this event. But what was that air compressor for?

Cultures throughout recorded history have used rituals in countless different ways. At its essence, a ritual or ceremony is a Vessel, and each participant is free to fill that vessel with as much or as little significance as she or he chooses.

The above quote was taken from the program notes for Vessel, a recent concert presented by the Convergence Vocal Ensemble. This evening of commissions was the result of a collaborative effort shared by Convergence and a number of composers, and facilitated by the Austin New Music Coop and a number of sponsors including New Music USA. Composers were commissioned to write pieces for four voices combined with a variety of instrumental combinations, including new instruments created specifically for this event. Prior to the concert, we got the lowdown on the conception and creation of these new instruments by Norma Yancey and Travis Weller. Dubbed “Skiffs,” they were built from (among other things) repurposed organ pipes scavenged from an organ repairman who, upon announcing his retirement, was descended upon by a variety of Austin new music folk, every one eager to lay hands on these dormant parts and give them new life.

“Skiffs” built from (among other things) repurposed organ pipes.

Andrew Stolz’s Nomad Unraveling featured members of Convergence (present this evening as a quartet) joined by the composer on harmonium and Travis Weller on the Owl. A sawing, keening sweep recalling the harmonics of an electric guitar cut through the slow rise and fall of the harmonium as the four vocalists shushed and hissed within the texture.  Occasional strums acted as section markers as quarter tones were passed from tenor and bass to soprano and mezzo until all fell silent. Spoken text culled from the book Generations by William Strauss and Neil Howe and a number of articles on “Generation X” provided fodder for the subsequent chant-like section which felt at some points serene and at others like a bizarre church service. The Owl/harmonium combination in this section sounded like a giant, solemn harmonica, fifths and octaves dominating the overtones that echoed through the space. A return to the smaller intervals harkened a final move to consonance, beaters keeping slow time on the Owl as the piece came to its end.

Sarah Dutcher’s Sleep was the only a cappella offering of the evening. Starting with a simple melody performed by Gitanjali Mathur, a polyphony developed, delivered as a closed-mouth hum among the players. Sleep drifted quietly through the hall, vowels morphing from one to the next in a slow six; a soft, short, drifting lullaby. The Water Bowl for vocalists, percussion, horn, and trombone by Brent Fariss circled conceptually around the constant and repeated rituals practiced by those afflicted with obsessive-compulsive disorder (OCD), and physically around an actual water bowl which took center stage. Divided into sections loosely demarked by Convergence bass and artistic director Cameron Beauchamp’s heads-up conducting (he was performing as well, and would on occasion make his way into the other performers’ lines of sight to indicate section changes), the piece began peacefully with the singers breathing in and out, sometimes together, sometimes subtly affecting the breathing. Laura Mercado-Wright counted out loud in groups of eight and thirteen, a feature which became central to the piece and occurred in the other players’ parts as well. Hornist Mikal Hart joined trombonist Steve Parker in exploring the low range of their instruments; low guttural moans mixed with Nick Hennies’s bass drums scrapes to complete a compelling sound world. 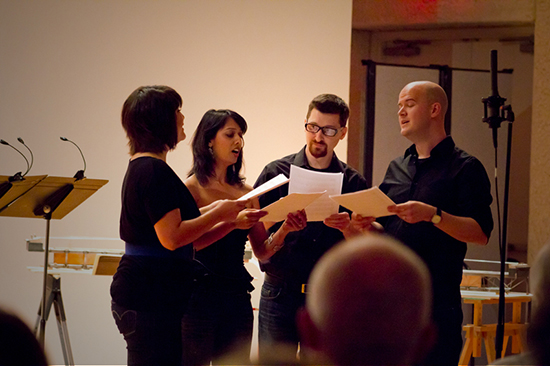 In Travis Weller’s Hear Rightly, a trio of skiffs joined Convergence in a setting of 95c, an “erasure” by Dorothy Meiburg. Derived from the 1978 edition of “Lutheran Church Worship,” Meiburgs’s text was created (one might say “sculpted”) by removing all but a few words of the existing page to create a new text. For example, a portion of the text came from the prayer “Thanksgiving For Light II” which, when subjected to Meiburg’s sculpting, became simply “Light II.” Screeching drones produced by bows drawn across the skiff’s strings set the stage for vocal lines which began in the tenor and bass and made their way to the soprano and mezzo. Small dowels drawn across strings created a sound like insane wine goblet music, all jagged overtones and a beautiful ending of each attack that recalled the slightest jaw-harp vibe. Hand-held piano hammers replaced the dowels to create a koto-like impression, and the resulting effect was that of a music box. A slightly creepy dollhouse atmosphere coalesced before forming up with solo voice, then duo, all long melodies, wandering. From this, a single angular vocal line staggered about as the skiffs mimicked sitars.

I should back up here. An intermission preceded Hear Rightly, and I took the opportunity to step outside. On my way back in, I saw Travis beneath a lamp in the parking lot manipulating a large air compressor. 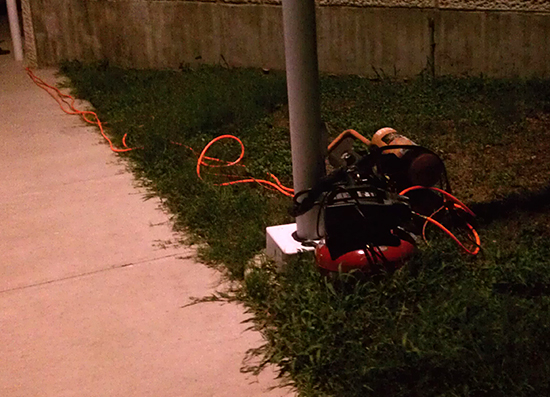 From seemingly out of nowhere, the air compressor began to feed the pipes, but instead of blasting their way through in true church organ fashion, they filled the space and gave body and depth to the prevailing texture. Appropriating these found objects, as removed and repurposed as the text they supported, was as contextually compelling and unifying as it was musically satisfying.

Keith Manlove’s into memory, through ritual featured Convergence’s vocals run through a variety of processing, all accompanied by a video presentation. The video featured two alternating vignettes; the first was of a trio sitting at a coffee table and the second was of a lone dancer whose dance was periodically interrupted by other actors covering her with cloths, blankets, and blindfolds. This sort of thing can get derailed quickly if the video is either too abstract (why are we watching this?) or too narrative (wait, is she supposed to be the french horn or the trumpet?), but here the “story” of the video had enough body to seem linear and enough forward motion to suggest development without being explicitly illustrative or, god forbid, didactic. Visceral vocalizations among the quartet realized by quick breathing and timbre manipulation gave way to Paul D’Arcy’s clear tenor solo. A syllabic “language analog” provided a counterpoint to the video in its suggestion of motion and narrative, and was soon filled out by four voice polyphony. Granularization and reverberation transformed the otherwise smooth voice leading as the performers began to accompany themselves with a variety of hand claps, pops, and head shakes, the last of which had as much visual impact as aural. Descending lines came of like something from the Tower of Babel, each voice struggling to dialog, hands waving and eyes popping as all possible avenues of communication were explored.