There were plenty of capable and talented ladies involved with jazz from the beginnings of jazz history, but social expectations for the household matriarch did not include frequenting dance halls at night and touring around the country for weeks in a bus full of men. For some brave women, the attraction to this exciting new music was stronger than social barriers. 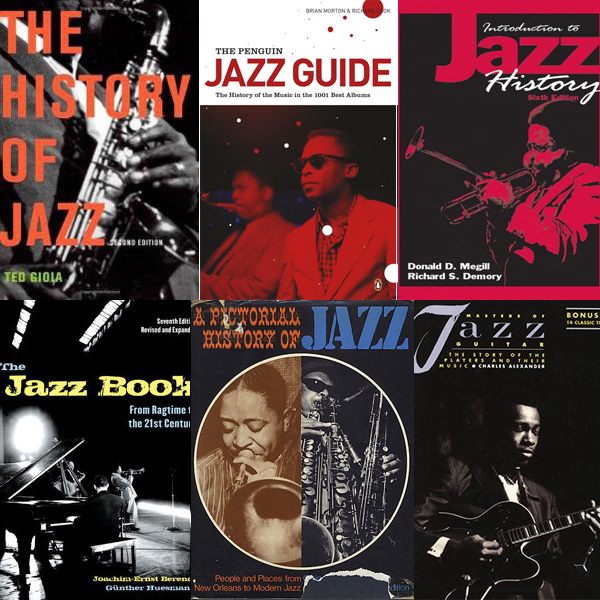 On March 8, 1914, women all over Europe rallied against the pending war and requested the right to vote. March 8 was declared International Women’s Day and has become a global day of recognition and celebration. Many countries treat it as a national holiday, and in some places people give gifts to their wives and mothers similar to Mother’s Day. Much has changed in the last 100 years and some argue that the battles have been won for women’s rights. Unfortunately, there are still many instances in which women earn less than their male counterparts, and the number of women in business and politics is still not equal. Similarly, there are a fair number of successful female jazz instrumentalists in the contemporary jazz scene and role models for every instrument. But in reality, participation is still in the single digits and many doors stay closed to women.

In my second post for NewMusicBox, I’ll trace some of the history of women in jazz. The above pictures are the covers of a variety of jazz history books commonly used in the classroom. Please take a moment and compare the pictures. Now formulate a description of “the jazz icon.” How does the picture below fit the description? 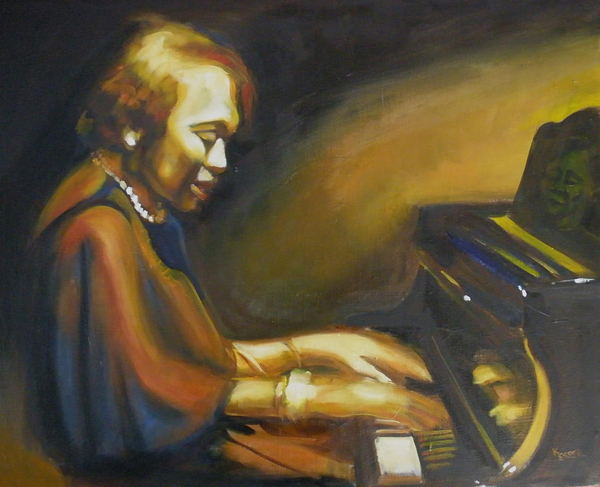 “Kansas City Jazz” by Kaytee Esser. Reprinted with the permission of the artist and available directly from her.

It doesn’t, and it’s certainly not an image found in jazz history books. Were there no female musicians playing instruments or do we just not know about them? The truth is that there were plenty of capable and talented ladies, but social expectations for the household matriarch did not include frequenting dance halls at night and touring around the country for weeks in a bus full of men. In addition, most of the instruments in a jazz combo—such as the drums, bass, or brass—were perceived as more suited to male players due to physical requirements. For some brave women, the attraction to this exciting new music was stronger than social barriers. Their stories are mostly untold and they remain in the shadow of the “jazz giants.” In recognition of International Women’s Day, let’s celebrate some of the instrumentalists who joined the bands.

May Aufderheide (1888-1972) was born in Indianapolis and became quite successful as a Ragtime composer in the first decade of the 20th century. Her 1908 “Dusty Rag” was one of the first important rags to emerge from the Indiana-Ohio region. Her last success was her “Novelty Rag” in 1911, before marriage and family duties ended her composing career.

Lilian Hardin-Armstrong (1898-1971) played piano and worked at a music store in Chicago. Fascinated by the sounds of this new music called jazz, she learned the style and started playing with a variety of groups and was eventually invited to take over the piano chair in King Oliver’s Creole Jazz Band in 1921. The second trumpet player in the band became her husband in 1924 and she convinced him that he should become a leader in order to showcase his incredibly strong sound and talent for improvisation. And thus Louis Armstrong started his own groups. One of the recordings that Louis Armstrong’s Hot Five and Hot Seven became well known for is “Struttin’ With Some Barbecue”—a Lil Hardin original. After their divorce in 1938, Lil remained active in the music business for the rest of her life and passed away two months after Louis when playing the “St. Louis Blues” during a Louis Armstrong memorial celebration.

A variety of performers emerged from musical families. Chattanooga-born trumpeter Valaida Snow (1904-1956) was one of them, and she was working as a professional entertainer by the age of 15. She performed in musical reviews and as bandleader, recording for Derby, Apollo, and Chess Records. The role model for trumpeter Dolly Jones (1906 or 1907-c. late 1970s) was her mother, trumpeter Dyer Jones. Dedicated to her instrument and the music, Dolly performed with bands in the Chicago area and earned the respect of her peers, such as Roy Eldridge and Doc Cheatham. The Hampton Sisters—Aletra Hampton (piano, vibes), Virtue Hampton (bass), Carmelita Hampton (saxophone), and Dawn Hampton (vocals), were part of the Hampton Family band, which was best known for their youngest brother, trombonist Slide Hampton. (Two of the surviving sisters—Aletra and Virtue—continue to perform together to this day; Carmelita died in 1987.)

During the Great Depression all-female groups first became popular—roles shifted due to the need for diversion in difficult times. But players were often acknowledged for reasons beyond musical ability.

“[W]omen are never hired because of their ability as musicians, but as an attraction for the very reason that they are women, and men like to look at attractive women. Consequently, the manager is continually reminding the girls not to take the music so seriously, but to relax, to smile. How can you smile with a horn in your mouth? How can you relax when a girdle is throttling you and the left brassiere strap holds your arm in a vise? If we quaver a little on the high notes, it’s because we are asked to do a Houdini … On the other hand, men’s orchestras are usually hired because of their ability as musicians. Their good looks, their presentability other than neatness, will rarely enter the question.”

The tradition of all-female orchestras continued during the Second World War and women were employed in men’s bands to fill the gaps. The most popular of these groups, The International Sweethearts of Rhythm, traveled on many USO tours. Among other groups from that era were Ada Leonard’s All American Girls, Ina Rae Hutton and Her Melodears, Helen Lewis and her All-Girls Syncopaters, The Parisian Red Heads, Ivy Benson and her All Girl Orchestra, Clara De Vries and Her Jazz Ladies, Gloria Gaye and Her Glamour Girls Band, and Gracie Cole and Her Orchestra, to name just a few. Obviously there was no shortage of capable musicians, but as soon as the men returned from war duties they reclaimed their jobs in the entertainment business.
Trombonist, composer, and arranger Melba Liston (1926-1999) played with and arranged for Randy Weston, Dizzy Gillespie, Quincy Jones, Count Basie, Billy Holliday, and many others. At the age of seven, she picked the trombone as her instrument of choice because she thought it was the most beautiful thing she’d ever seen. Eventually the hardship of life on the road and the abusive environment in all-male bands caught up with her and she quit performing. Nevertheless, she wrote arrangements for Randy Weston up until her death at the age of 73.

There are many more examples of outstanding musicians who, despite all obstacles, followed their passion and prevailed in a male-dominated environment. But unfortunately, as music educator and author Janis Stockhouse noted, they received little credit for their contributions.

“The main problem in the public perception of women in jazz is not a resistance to their potential future roles, but a failure to recognize the profound impact those musicians have already had on the game.”

As we celebrate Women’s History Month, let’s rewrite history and include many of these daring and dedicated role models. And more importantly, let’s give them the credit they deserve for their contributions to the music. There is a wonderful resource to get started over at the NPR website.