Old Colorful Marbles in a Glass Jar
NewMusicBox
Written By

Uniquely Together: The Chicago Paradox

Chicago is a city of individuals with an entrepreneurial streak and a DIY mentality who work hard to build from the ground up, but who are also very interested in finding their shared identity. And Seth Boustead finds that all voices, unique as they may be, are welcome in the search.

The Ear Taxi Festival coincides almost exactly with the 100th anniversary of the publication of Carl Sandburg’s seminal collection Chicago Poems, which—while wholly unintentional—is still a neat coincidence.  Sandburg did as much as anyone to cement Chicago’s reputation as a city of rough-hewn individuals who created a great metropolis through physical labor and are justifiably proud of it, and I see Ear Taxi in a way as the musical manifestation of this: a celebration of the individual composers and performers who have created a bustling contemporary music scene and who are, if you missed the posts on social media, also proud of it.

Five years after Sandburg’s poems were published, Ben Hecht would paint the city with similar strokes in his great collection of stories, which was later published as 1,001 Afternoons in Chicago. In Hecht though, the rugged individualism of Sandburg is combined with a search for a common thread—or motif, in his words—that connects everyone he wrote about. To me, this is an impulse also present in Ear Taxi, as the festival is an attempt to bring all of the disparate styles and the whole tangled mass of creative musical energy in the city under one metaphorical roof.  This uniquely Chicago paradox has always fascinated me.  It’s a city of individuals with an entrepreneurial streak and a DIY mentality who work hard to build from the ground up, but who are also very interested in finding their shared identity.

Over the years, I’ve seen numerous attempts to codify Chicago’s various arts scenes. Whether it’s film or music summits, the Architecture Biennial, the Sonic Impact Festival, Chicago Improv Fest, Lake FX, the Chicago International Music and Movies Festival, or one of many others, the intention is to show off the entire range of any given art form happening in the city and put it in one place. As another example, a few years ago Boeing donated a large sum of money to the Elastic Arts Foundation to create chicagomusic.org, which was meant to be a one-stop shop for all live music in the city. But, though their efforts to include every performance in Chicago were nothing less than heroic, the task proved impossible as there is simply too much happening.   The quixotic attempt, however, is uniquely Chicago. One thinks immediately of architect and urban planner Daniel Burnham’s famous maxim to make no small plans.

There is something innate that causes Chicago to celebrate the individual while searching restlessly for shared identity, and I believe this has led to an unusually tolerant arts scene.

This constant search to find a shared identity among disparate individuals reminds me of a story in Plato’s Symposium.  In the work, Socrates, Aristophanes, and the boys are up late drinking and, as boys will do, they start talking about the origins of love. Aristophanes says that in the beginning humans were not individual entities but two separate people fused together which, according to him, was actually a happy arrangement. Unfortunately though, as in so many other mythological tales, we somehow offended the gods and Zeus promptly sent one of his ever-ready thunderbolts to cleave us in half. Now we spend our lives searching to be made whole again.

I believe the metaphor transcends geographic and cultural boundaries.  Chicago is a famously divided city yet there is something innate that causes it to celebrate the individual while searching restlessly for shared identity, and I believe this has led to an unusually tolerant arts scene.

The style wars did not hit Chicago as hard as in other places.  Composers in Chicago didn’t always approve of other composers, and they didn’t always believe certain directions were fruitful or had artistic merit. But when the call to unity came, it was generally heeded.  Sure, for the most part we’re still very much clumped along academic lines: if you are a composer who went to Northwestern, for example, most likely it’s Northwestern groups who play your music. But that’s natural. What’s unique about Chicago is that there is always a basic assumption that everyone, regardless of affiliation, is adding to a collective scene and that their contribution to that scene is important.

I’ve seen this tolerance firsthand numerous times, but I really put it to the test in 2004 when I created an organization called Accessible Contemporary Music. “Accessible” isn’t exactly a hip word now, but it was practically obscene back then. I got a decent amount of crap for it, naturally, but when leaders of Chicago’s new music community got together to decide how we could all best cooperate to mutual benefit, there was a seat for me at the table. I’m not entirely certain that this would have happened in another city. It’s not that Chicago is more enlightened than other places, it’s just that all voices are welcome as it continues this interesting search for a collective identity.

It’s not that Chicago is more enlightened than other places, it’s just that all voices are welcome as it continues this interesting search for a collective identity.

When we sat down in the basement of Symphony Center in 2005 to formulate what would eventually become New Music Chicago, interestingly enough most of us at that time did not know there had been a previous organization with the same name that flourished in the 1980s under the leadership of Patricia Morehead (who was also the artistic director of CUBE, Chicago’s second contemporary music ensemble) and George Flynn (whose Chicago Soundings series started at the Green Mill jazz club in the 1970s and continues today).  Ours was not a conscious attempt to resurrect the former organization, but an example of the city’s latent urge toward unity manifesting itself through us. To paraphrase Voltaire, if New Music Chicago didn’t exist it would be necessary to invent it.

Chicago in many ways is a kind of self-contained universe, a place for artists to thrive by turning inward. I believe that in many ways this is because of the vitality of the ubiquitous storefront theater scene.  If you live anywhere in the city, it’s unlikely you live more than a few blocks from a small theater.  But the small theaters get big reviews every bit as often as the Goodman or Steppenwolf do, and the small storefronts are widely considered to be the place for innovative, edgy productions. The goal isn’t to send a production to New York or London, the focus is instead on the work itself.

You can see this in the visual arts as well. Chicago’s most important art movement may be the Chicago Imagists, which includes several interestingly named sub movements like the Hairy Who, the Non-Plussed Some, and the Monster Roster.  Most of these artists never left Chicago and, as such, they created unique local styles and are kind of the epitome of a bonded group of distinct individuals.   They represent the proud Chicago tradition of loudly not caring about the goings-on in other cities, and they cite staying in Chicago as having given them the freedom to develop according to their innermost desires rather than larger trends.

So it’s not all that surprising that, as the contemporary music scene in Chicago has begun to really thrive, it has grown up along similar lines.  Though the downtown Loop was once the go-to concert destination, performances now frequently happen throughout the city, mirroring the storefront theater trend. Over the years, as new ensembles have sprung up like musical weeds, I’ve seen shows in former mansions, furniture stores, cabaret clubs, jazz clubs, empty storefronts—even an empty restaurant that had gone out of business.

Chicago may never find the unity that it’s searching for, but the search has created a unique arts scene where its individuals can flourish and be truly creative.

When Ralph Shapey moved to Chicago in 1964 his colleagues widely assumed he was moving to a contemporary music desert but, even assuming that were true at the time, it’s certainly not the case anymore. Composers and performers are moving to the city every bit as much to be part of the scene as to go to school, and those who move to the city for their studies are increasingly sticking around after they finish.  In just the last five years, the number of emails I get about new music performances has increased three-fold and it shows no sign of stopping. The range of music being performed is dizzying.

Ear Taxi is the most ambitious attempt yet to bring all of this disparate activity and unruly DIY individualism under one roof, and the audacity is something at which Sandburg, Hecht, and Burnham would have nodded approvingly—probably through a thick haze of cigar smoke.  Chicago may never find the unity that it’s searching for, but the search has created a unique arts scene where its individuals can flourish and be truly creative. 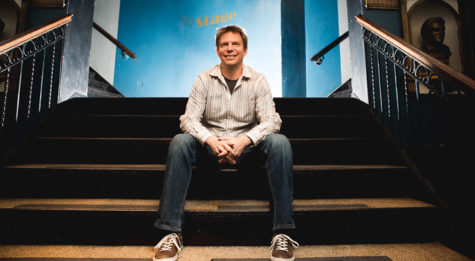 Seth Boustead is a composer, radio host, arts manager and writer, concert producer, in-demand speaker and visionary with the goal of revolutionizing how and where classical music is performed and how it is perceived by the general public.