This week, Kelly Hiser begins a tour of encounters between audiences and new electronic sounds with a look back at the Telharmonium, installed in New York City from 1906 to 1908 and occupying TWO floors of “Telharmonium Hall” at Broadway and 39th Street.

Electronic musical sound saturates our sonic world. Check the pop charts any week, and you’ll hear sounds clearly identifiable as electronic in almost every track. We expect to hear these sounds, and rarely consider their presence, let alone their significance. Given their ubiquity, it’s clear that electronic sounds matter—but how? What do they mean to us? How did they become so valuable and so popular?

If you go looking for answers to these questions in the pages of electronic music histories, you are likely to read a story like this: in the middle of the 20th century, avant-garde composers like John Cage and Karlheinz Stockhausen pioneered various techniques, ideas, and sounds that eventually led to a digital revolution in the 1980s, when electronic music exploded and came to dominate popular music. 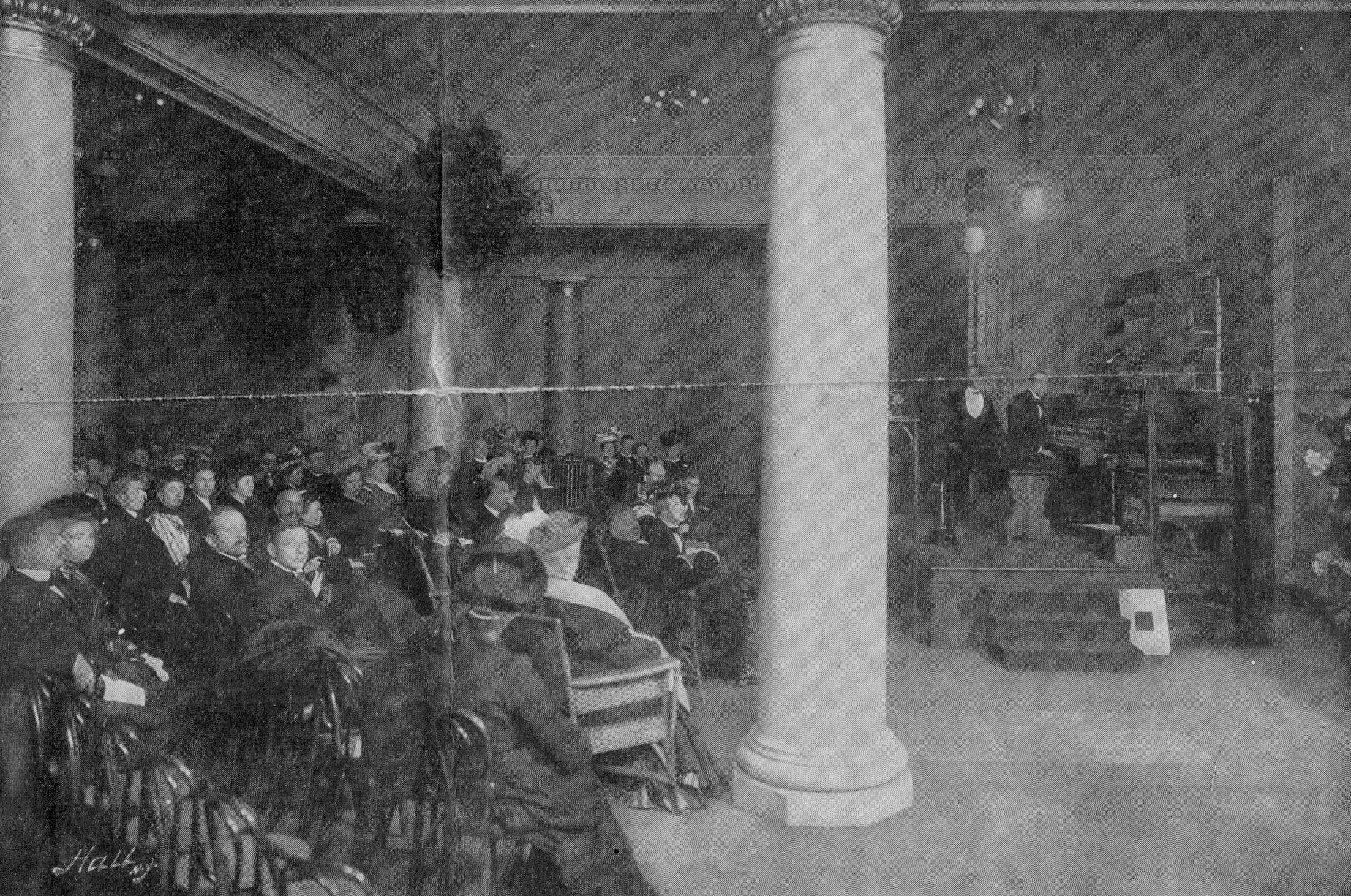 Crowd in Telharmonium Hall, A. B. Easterbrook, “The Wonderful Telharmonium,” Gunter’s Magazine (June 1907)

The instrument that first introduced U.S. audiences to electronic sound was an enormous machine that drew accolades during two short seasons in New York City: the Telharmonium. Invented by Thaddeus Cahill and installed in the city from 1906 to 1908, the instrument occupied two floors of “Telharmonium Hall” at Broadway and 39th Street. In the basement sat half an acre of machinery, including switchboards, tone mixers, and dynamos—the large electrical generators that produced the instrument’s sound. Telephone wires carried the sound upstairs where receivers, somewhat amplified by simple paper cones, piped the music to audiences. Two, three, or sometimes four performers played the instrument’s hodgepodge of interfaces, including multiple keyboards, pedals, and switches.

Telharmonium Hall opened in 1907 to critical and popular success. During its first season, tens of thousands of people attended concerts there. The hall also offered subscription services a century before streaming platforms like Spotify came to dominate music consumption. Some of the city’s most lavish cafes and hotels, among them the Café Martin and the Waldorf Astoria, became subscribers, as did private individuals like Mark Twain. The Plaza Hotel went so far as to wire every guest room for Telharmonic service.

Laudatory accounts appeared everywhere from McClure’s and The New York Times to Scientific American and Literary Digest. “It is wonderful,” said Alfred Hertz, conductor of the Metropolitan Opera, “and I believe in telharmony as an art of music.” Famed tenor Enrico Caruso foresaw a musical “revolution,” and journalists agreed, predicting the end of the orchestra, a new era in musical appreciation, and the improved health and family life of Americans (at least some Americans) who would now have music, day and night, “on tap.” 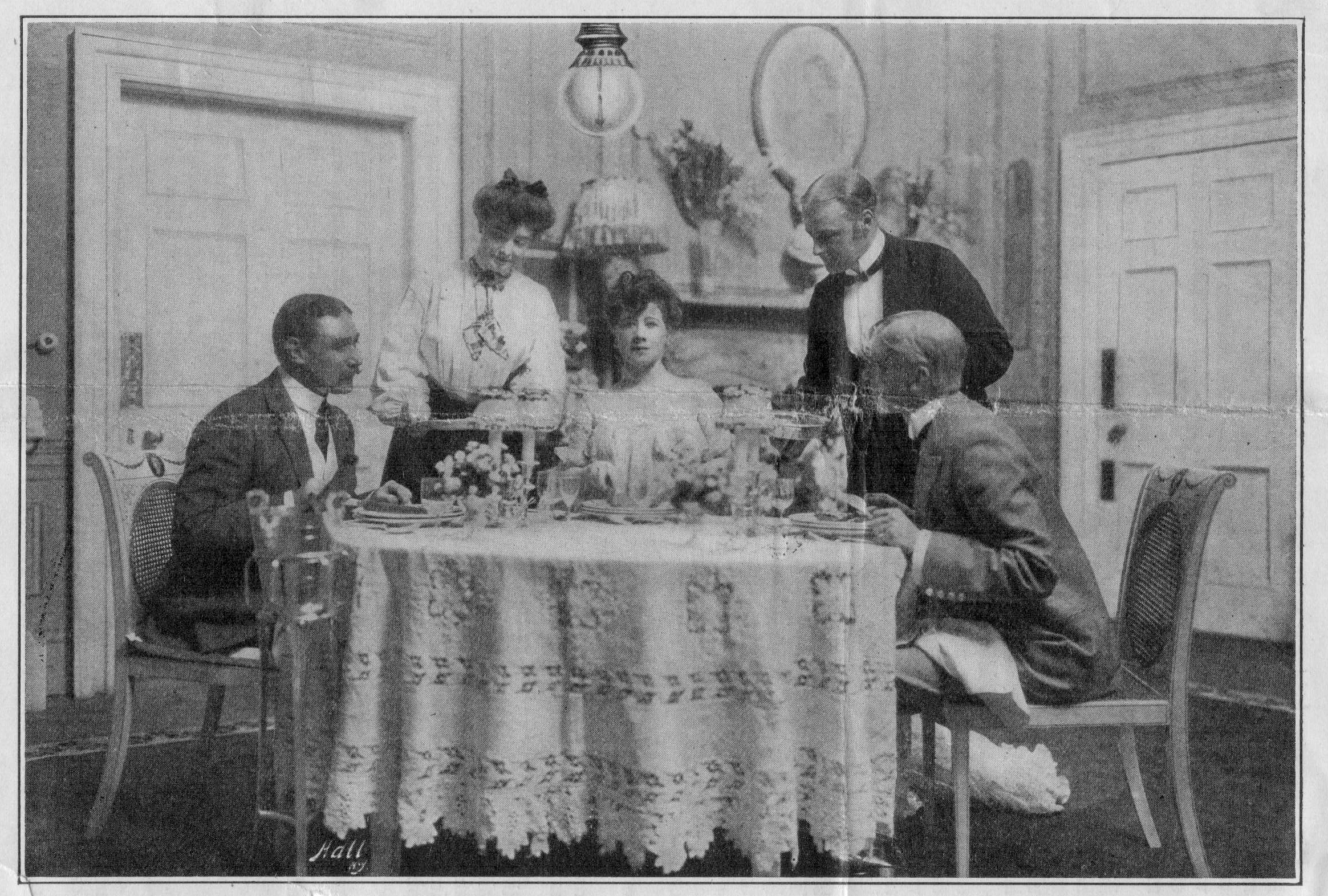 “Dinner from the Future” (depiction of an “ideal” family experiencing Telharmonium music, piped through their lamp, during dinner)

For proponents of the instrument, the Telharmonium was an ideal vehicle for revolutionary changes in music production and consumption because of the quality of its tone, widely perceived as “pure” and even “perfect.” Purity has long been associated with whiteness. Rhetoric about racially “pure” musical aesthetics and sounds was already decades old by the 20th century, and was exacerbated by anti-immigrant policy and sentiment. “Purity” was central to a nationalist voice culture movement of teachers and musicians that thrived in the U.S. from around 1880 to 1920. Scott Carter, who has documented the movement, notes an obsession with pure vocal tones, rooted in racist beliefs about vocal clarity and anxiety over non-white immigrants.

Within the new science of acoustics, which Cahill carefully studied, purity of tone had a similar racial component. Tara Rodgers notes that acousticians like Hermann von Helmholtz equated “notions of the sine wave as ‘pure’ and ‘lacking body’ with whiteness and scientific objectivity,” and timbral variations away from this norm with “material embodiment (e.g. raced, gendered, classed) and transgressive pleasures.” Cahill designed the Telharmonium to produce and combine sine waves and to create various timbres, and touted the instrument’s tones as being “purer and better than those of the orchestral instruments.”

Journalists happily took up this talking point about the instrument’s sound, describing it as particularly pure in review after review. The Telharmonium’s audiences and commentators were almost exclusively middle- and upper-class white people, and while it’s impossible to know whether the average listener heard the instrument’s sound as pure, it is safe to say that they experienced it through the lens of their racial experience. White audiences were used to having all kinds of products marketed to them as “pure” (and therefore healthy and superior)—from soap to food to medicine. Telharmonic music was for this population: created and sold in elite white spaces, consumed by white audiences, and widely described as sounding white. 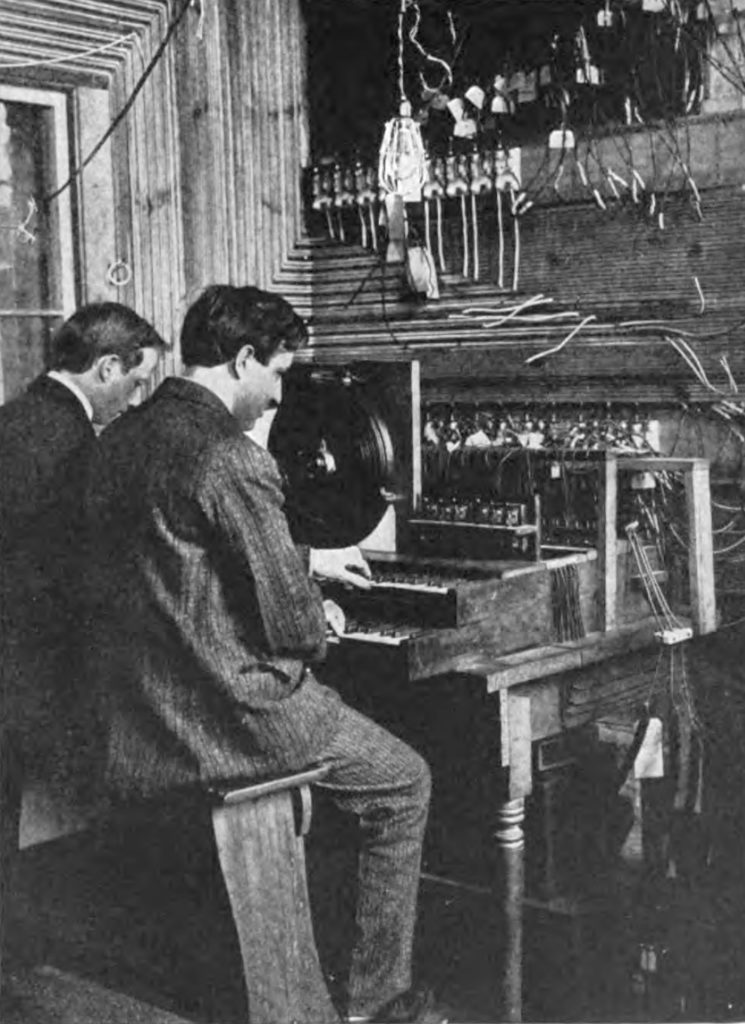 Nowhere does a journalist or marketer make the whiteness of the Telharmonium’s sound explicit; as Jennifer Stoever points out, when whiteness is the racial default, its sonic qualities are rendered inaudible. Yet one New York Times story—“An Invisible Rival for the Hurdy Gurdy”—comes close, pitting the Telharmonium’s sound against music made by a pair of immigrant street musicians.

During the Telharmonium’s brief time in New York City, the number of Italian and Eastern European immigrants in the city and nation was rising rapidly. Then as today, overblown fears about immigrants fed—and were fed by—racist stereotypes and discourses about citizenship (at the time, these immigrants were not considered white). In “An Invisible Rival for the Hurdy Gurdy,” a pair of street musicians—“two swart Italians, man and wife”—set up their barrel organ just outside Telharmonium Hall during a performance. In the story, as the husband begins to crank “a syncopated air” out of the instrument, his wife stops him, crying, “Somebody in dis-a place ees playing da bigga org” and pointing to Telharmonium Hall. The “Sicilians,” The Times reports, “were awed. They realized that against the massive tones that came from the building their instrument offered a thin and hopelessly unentertaining substitute for such rival music—although theirs had the merit of being real.”

Yet awed as they were, the musicians themselves posed a threat to the order within Telharmonium Hall: the sounds of their barrel organ disrupted the concert. In response, the hall’s manager, who had been giving a demonstration of the instrument, directed the players to begin a performance of Robert Schumann’s “Träumerei,” assuring the audience that this would “put an end to the hand organ.” As predicted, the performance silenced the street musicians into awestruck and dumb appreciation.

Every aspect of this New York Times story carefully designates the Telharmonium as an instrument fit for white bourgeois society, using the immigrants on the street as a foil that drives the point home. The bodies inside Telharmonium Hall (both the “society folk and prominent New Yorkers” in the audience and the management) are racially unmarked, and therefore white, unlike the “swart” immigrants outside. The “great massive tones” and the comparison with the pipe organ connected the Telharmonium to Western art and sacred music traditions, while the sounds of the street musicians registered as disruptive noise rather than music. The Telharmonium’s repertory—mostly slow, lyrical “classical” and popular melodies—likewise drew on white Western traditions in contrast to the “syncopated” music of the street musicians, which easily could have been a popular ragtime tune with roots in Black musics.

Even the “unreal” status The New York Times assigned to the Telharmonium’s music appears as a (racial) merit that signals a freedom from materiality, not unlike the supposed immateriality of sine waves. In describing its sound as “unreal,” the author emphasizes the ephemerality of music emitted by hidden sources beneath Telharmonium Hall and transmitted over wire. In contrast, the physicality of the street music is almost excessive. Its means of production—the barrel organ and its player—are not only visible but conspicuous, marked as outsiders by their speech and skin. 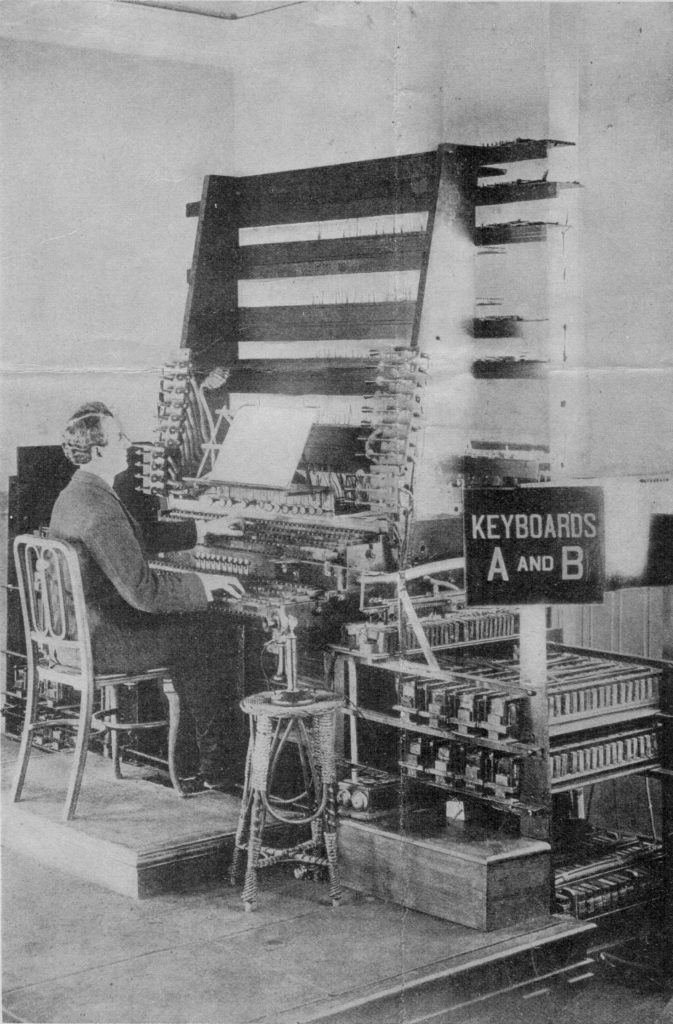 At the Telharmonium keyboard, A. B. Easterbrook, “The Wonderful Telharmonium,” Gunter’s Magazine (June 1907)

The End of Underground Music

After the promise of the Telharmonium’s first season, the instrument’s fortunes nosedived. Unable to navigate the enormous legal and logistical challenges of delivering music via telephone wires to subscribers across the city, the instrument’s financial backers extracted themselves from the project and Telharmonium Hall closed permanently in the spring of 1908.

Even if the Telharmonium’s backers had managed to create the infrastructure the instrument required, its success was hardly guaranteed. Despite the accolades from the white press, the instrument was notoriously inept with popular music of the day like ragtime. While the Telharmonium offered performers an array of controls for dynamic expression and timbre, Cahill seems to have thought little about how the instrument handled music that relied on rapid rhythms and clear attacks.

The Telharmonium’s history points us to a version of electronic music history rich with meaning and uncomfortable truths about how musical sound comes to matter to us. Its brief popularity suggests, perhaps surprisingly, that we have long located profoundly human qualities in electronic musical sound. Perhaps we should not be surprised that the humanity we find there is a deeply troubled one, rooted in our nation’s ongoing struggles over race, identity, and belonging.