Trying to Put On Those 2002 Glasses

What music most appropriately captures the zeitgeist of 2002? Steve Reich’s Daniel Variations (created in response to the shocking February 2002 murder of Wall Street Journal’s South Asia Bureau Chief Daniel Pearl) was not composed until 2006, but another Reich work, his apocalyptic Three Tales (created in collaboration with Beryl Korot) immediately stands out in my mind.

Unfortunately, you won’t receive “2002” glasses for donating in honor of NewMusicBox @ 15. You will receive a shout-out on social media and the undying thanks of all those who care about new American music!

Given the enormity of the events of the preceding year, 2002 seemed somewhat calm—at least by comparison—although it was a time of great tension. The start of that strangely bipolar and palindromic year—the only one most of us will ever live through besides 1991, since the next one won’t be until 2112—set the tone for the entire year.  If memory serves, it was the first time that folks wanting to witness the descent of the Times Square ball on New Year’s Eve were essentially locked in once they got there (a security measure on the heels of 9/11), but it didn’t stop the folks who did from wearing those dorky palindromic glasses.
Of course, that year of not-so-quiet desperation had its own horrors. One of the more disturbing events from early in that new year was the abduction and beheading of the Wall Street Journal’s South Asia Bureau Chief Daniel Pearl, who would be memorialized four years later by composer Steve Reich in his Daniel Variations. In March, the United States invaded Afghanistan. We are still there. We would not invade Iraq until the following year, but headlines throughout 2002 were dominated by various ultimatums to Iraq’s then-leader Saddam Hussein—the phrase “weapons of mass destruction” and its acronym, WMD, was named the Word(s) of the Year by the American Dialect Society.

While that designation proved prescient—twelve years later, we still use that phrase and variants of it—of course, no WMDs were ever found in Iraq. Perhaps another 2002 proclamation by the American Dialect Society, that the verb “to google” was the most useful word of that year, was even more on the mark. From today’s vantage point, where hindsight gives you better vision than those 2002 glasses ever could, it’s difficult to imagine that folks used other search engines once upon a time, despite this month marking the fifth anniversary of Microsoft’s Bing. Another thing it’s becoming more and more difficult to remember was the act of constantly changing money when traveling from country to country in Europe—a nuisance that effectively came to an end that year when the Euro became the only official currency throughout most of Western Europe.

As for musical memories of 2002, those are more complex. Opinions swung back and forth throughout the year on the ethics of sampling. While many viewed it as a struggle between individual creators wanting to mine new aesthetic territory and a goliath-like corporate music industry trying to maintain control and maximize profits, James Newton’s suit against the Beastie Boys proved that things were not quite so clearly delineated. Another hot topic for us was whether or not there’s a relationship between gender and music. (It remained a point of contention a decade later, and is still an issue today). Amidst all these debates where folks were forced to taking sides, at least one American composer actually ran for political office (though he lost). But one of the stranger and sadder events of the year was composer Michael P. Hammond’s sudden death just one week after reporting to work as the new Chairman of the National Endowment of the Arts.

But what piece of music most appropriately captures the zeitgeist of those precarious twelve months? Daniel Variations was not composed until 2006, but another work by Reich, his apocalyptic Three Tales (created in collaboration with his wife, video artist Beryl Korot) immediately stands out in my mind, although it sort of has an unfair advantage.  There’s usually a chronological disconnect between when a musical composition is completed and when audiences finally get to hear it. (Perhaps the most extreme case being Lewis Spratlan’s 2000 Pulitzer Prize-winning Life is a Dream Act Two, a work completed in 1978 but which did not received its premiere until 1999, thus making it eligible for the Pulitzer.) Reich, however, then still having the recourse of his own ensemble (they have not played together since 2009), was able to eschew even the usual lag time. He completed the music for Three Tales early in 2002, the work premiered in Europe that May, and I attended its American premiere in October. I remember feeling somewhat manipulated by it at the time and disconnected from its message which seemed to reek of technophobia, but 12 years later many of the fears Reich was responding to have become our less-than-ideal reality.

Of course, music that doesn’t rely on notation as its primary means of conveyance doesn’t have the same chronological disconnect, though there were other kinds of disconnects throughout music that year. Within the jazz community, 2002 is largely remembered as being the height of the “Jazz Wars” that erupted in response to the final episode of Ken Burns’s documentary that had aired on public television the previous year. On the one side were the defenders of so-called “jazz traditions” and on the other, folks who embraced jazz’s embrace of electric instruments, extended compositional forms, and total free improvisation. But, like most binaries, this schism did not reflect the reality of the music. A listen back to some of the music that was actually released that year offers further proof that, despite the posturing, music-making during those twelve months was a far cry from either/or.  Dave Douglas’s post-bop infused The Infinite and Anthony Braxton’s live recording of 8 Standards were both a far cry from the avant-garde with which both were normally associated, while Terri Lyne Carrington’s Jazz Is a Spirit sometimes veers pretty far away from her “young lion” roots. I doubt that even Stanley Crouch would consider Wynton Marsalis’s 105-minute All Rise (in which his Lincoln Center Jazz Orchestra is joined by the L.A. Philharmonic conducted by Esa-Pekka Salonen) to be purely a by-product of the swing tradition. Patricia Barber’s Verse showed that a jazz vocal album could feature lyrics that were as heady and sophisticated as Bob Dylan’s and still swing. Even then 18-year-old Aaron Parks’s Shadows ventured away from the straight-ahead jazz he had been playing and included a Radiohead cover.

My favorite indie rock album that year (insofar as I’m distrustful of ever singling out just one thing) was probably Wilco’s Yankee Hotel Foxtrot. The album had actually been recorded and mastered a year earlier, for Reprise Records, but was rejected and later thankfully picked up by, of all labels, Nonesuch Records, which was mostly known at the time for releasing recordings by the Kronos Quartet, John Adams, Philip Glass, etc. In some other strange genre-bending coups, the Grammy for Album of the Year—instead of going to a pop album as per always—went to the traditional bluegrass film soundtrack for the Coen brothers’ O Brother, Where Art Thou? and the Oscar for best film soundtrack was awarded to Crouching Tiger, Hidden Dragon composed by Tan Dun.  My favorite of the awards that year, though, was probably the Pulitzer that went to then 88-year-old Henry Brant for his spatial orchestral work Ice Field, the oldest composer ever to be so honored but also one of the most outsider pieces ever awarded. (It has still not been commercially recorded.) Rumor has it that Brant was unaware of this award before winning it!

Despite the vividness of that particular memory, much of 2002 is pretty blurry to me at this point, strangely more so than my memories of the three previous years. For some reason, it feels further away. Maybe that’s in part because of the 18 people who have been profiled on NewMusicBox who are no longer with us (an extremely small number considering the more than 200 that we’ve interviewed during these 15 years), we have now lost 6 from 2002: the iconic vocalist Abbey Lincoln, choreographer Merce Cunningham, musicologist H. Wiley Hitchcock, acoustic engineer Russell Johnson, composer/theorist George Perle, and Leo Ornstein (1893-2002), whose lifetime extended across three centuries—so his passing definitely marked the end of an era. (We also lost Henry Brant, whom I spoke to for NewMusicBox in October of that year though our conversation was not published until January 2003, and William Duckworth, who served as guest editor that October, interviewing Jaron Lanier for us.) 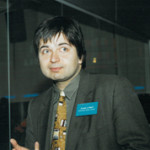 But the music and other great accomplishments of all of these people continue to affect me on a daily basis, so despite my feelings of wistfulness and sadness as I wrote this, there are a lot of great things to remember. And then there are those glasses….