In 2010 I had more or less stopped making music. I was despondent, negative, and cranky. To anyone who would listen, I complained about other musicians, arts funding, and how much better the European cultural infrastructure was. I’m so glad I’m not there anymore, and want to share what I did to get out of it and some of the results.

Things began to shift when my friend, the composer, conductor, and pianist Paul Leavitt, said that I was probably right about my complaints. He suggested that instead of complaining that Brooklyn wasn’t like Europe, I contribute to the community where I lived. I began looking for opportunities in walking distance from my home. I didn’t anticipate how far this decision would lead me in realizing Music for Contemplation concerts, Creating Music Together workshops and retreats, On Foot walking projects, and Broken Silence concerts.

On February 6th, at 4:00 pm, at St. Cecilia’s Church in Greenpoint, I played the first concert under the name Music for Contemplation. I performed a fifty-minute organ piece called “Elizabeth.” I can still clearly see the sun streaming through the window and hear the silvery jingle of one listener’s bracelet. More than thirty members of the parish came to listen and to rest in the sound on a Sunday afternoon. I saw how music could support listeners in practical ways.

I saw how music could support listeners in practical ways.

In 2013, with the cooperation of Fr. Michael Lynch and Msgr. Joseph Calise at Our Lady of Mount Carmel – Williamsburg, Tyler Wilcox, Andrew Christopher Smith, Erik Carlson and I continued Music for Contemplation. Again, we were surprised and nourished by the resonance with long-time Brooklyn residents. Dan Joseph joined the organizing team, and we put on a series of concerts at the Church of the Annunciation.

We wanted to offer people time to sit and listen and not have to think about anything, choosing pieces by Eva Maria Houben, Alvin Lucier, Shelley Burgon, and Christian Kobi. As the series continued, I noticed programming and pieces themselves took on more of a community aspect. Tyler invited Andrew Lafkas, who wrote a new work for eighteen improvisers. Dan organized Stuart Dempster and twelve trombones, and Tony Geballe led seventeen members of the New York Guitar Circle.

Often, we reserved the entire day on Saturday, rehearsing in the morning and evening, and performing in the evening. The rehearsals and concert became almost a day-long retreat, with energy flowing in the community that came together just for one day.

This lead to Creating Music Together workshops and retreats, where participants realize each other’s work. Everyone writes and everyone performs. To create common ground for the mix of professionals and non-professionals who participate, all work is for voice and hand percussion. Everyone has to develop and communicate their pieces in such a way that other participants can honorably perform them.

The day-long workshops begin with a sitting, followed by listening exercises and an introduction to composition. After a pot-luck lunch, everyone makes a piece of music and writes it down however they are able. Traditional music notation is not necessary, and we’ve seen some gorgeous graphic scores. We then rehearse everyone’s pieces, usually learning them by heart, and perform for friends in the evening.

In the week-long residential retreats, the day begins with a silent sitting followed by breakfast. Days include sessions with listening and composition exercises, silent co-working time, rehearsals, and informal performances. We take turns cooking for each other and caring for the house. There are usually three performance cycles. At the end of the day, there is an optional session where participants report notable moments from the day.

I’ve found a deep connection with participants in Creating Music Together. The atmosphere of mutual support is genuinely nourishing. One of my greatest joys as a musician in the past twenty years has been witnessing the satisfaction when someone hears their first composition for the first time.

Essential to being able to support others in their creative work has been identifying and meeting my own creative needs. Time alone in the music studio has been crucial; I’ve also structured projects, such as On Foot to have time alone as well as time supporting the group.

Essential to being able to support others in their creative work has been identifying and meeting my own creative needs.

In On Foot: Brooklyn, I walked everywhere I went for ninety-one days from February 21 to May 21, 2012. During the week, I walked alone, composing a new piece. Each Sunday, I led a group in a silent walk, and performed that week’s piece on the street.

In 2019’s On Foot: Aubervilliers, I designed and lead twenty-four silent walks in twenty-four days. In the design phase, I spent time alone freely wandering in and around Aubervilliers—letting my feet go where they would often getting lost. After following my curiosity, I looked at what route might work for a group. We began and completed each walk at Les Laboratoires d’Aubervilliers. In the middle, I made a thirty-minute field recording. After the walk was over, we played the recording back in the theater at Les Laboratoires. Participants were asked to commit to stay with us in silence until we returned to the theater. 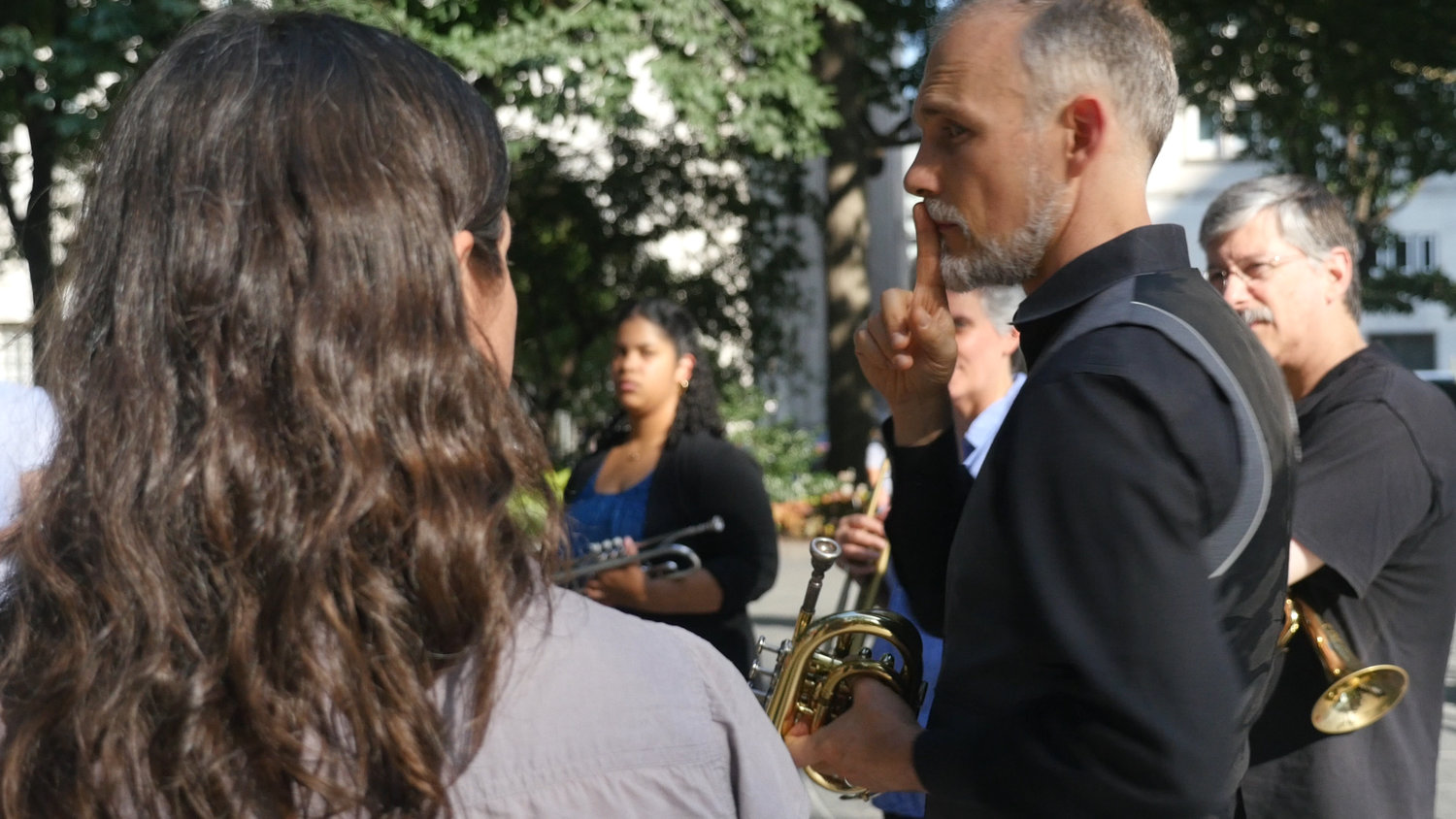 During the group walks, silence depended on attention. I asked participants to refrain from speaking with the mouth, with the eyes, and with the hands, and to refrain from using cell-phones, cameras, or other devices. I asked participants to leave devices at home or securely at the meeting point; I’ve noticed that when walkers had devices on their bodies, even when they were turned off, there was a different quality to attention.

In going over the parameters of the walk, I offered two simple attention exercises to support participants to stay present when their attention may have wandered. The first I learned from Alexander Technique teacher Frank Sheldon: notice what moves in your body when you breathe. The second I discovered during the walks: place part of your attention in your rear foot, alternating with each step.

[Ed Note: A short Arte documentary about On Foot ia available in French and in German.]

Silent walks have lasted between three and fourteen hours. The first forty-five minutes were usually a settling period. I’ve noticed the deepest silences after walking together for three hours. We took brief pauses to stretch. On longer walks, we took breaks to sit down for silent meals. At the end of each walk, I broke the silence by saying “thank you” and making eye contact with each member.

After the end of the walk, many participants enjoyed sharing what they saw or heard. Most participants reported hearing sounds they had never heard before. Others noted the arc of the day, a keener awareness of weather, and what it felt like to have extended time in silence.

While I do enjoy walking alone – usually in silence – I’ve noticed a different quality when walking together. Because silence depends on the level of commitment and attention of the participants, the experience depends very much on those who show up for it. Sometimes, we really connected—even when we began as perfect strangers. There were moments where were together—really together—in one moment. And then it was gone.

While I do enjoy walking alone – usually in silence – I’ve noticed a different quality when walking together.

This experience of being together has also been essential to Broken Silence, in which music supports listeners engaging with the abuse scandal in the Catholic Church.

The idea first came to me in 2014 on a Guitar Circle course. There was a long development in consultation with Pauline Oliveros, Chris Mann, Tony Geballe, Mary Madigan, Deborah Steinglass, and Fr. Michael Lynch. We gave careful consideration to all aspects of the situation: sound, content of the text, location, location of the chairs, how listeners enter the performance space, and money. Elisa Corona Aguilar, Erin Rogers, Kristen McKeon, Katie Porter, Alex Lahoski, Dev Ray, Patrick Grant, Jon Diaz, and Dan Joseph performed a series of workshop performances and gave valuable feedback on the piece.

In its final form, two saxophones and three steel-string acoustic guitars build long slow chords as I read text drawn from court testimony about the scandal. The music has three fifteen to eighteen minute parts with silence in between. Each part begins with a pure tone, which the musicians pass across the circle. Over five to ten minutes, tones are added one at a time, building a pulsating chord. Then tones fade out one at a time, often imperceptibly.

Musicians sit in a circle surrounded by listeners in concentric rings. I sit at one end of the concentric circles, directing my attention to the atmosphere of the room. Working intuitively, I sense the flow of the piece for that particular group of people. I make chords, text, and silences faster or slower depending on the energy in the room. As in the silent walks, the listeners attending have a direct effect on the music.

One thing we’ve found is that the group of musicians and listeners supports each of us—holding the space—as we engage with the challenging text about the abuse scandal. This is a difficult subject for contemplation, and many of us cannot bear to “touch” into it on our own. In the concert situation, with the support of the group, we have been able to stay with it—to be present for it—in ways we haven’t been able to alone. This is what workshop listener Jaime Beauchamp called “the light of awareness.” In this awareness, the scandal is only as big as it is. Many of us have found a new hope after listening to the text together. This light of awareness on the specific situation in the Catholic Church has also resonated for those outside the Church in contemplating corruption in other parts of our society.

When really connecting with others, I’ve noticed another presence beyond me and the others—a subtle atmosphere, incense, electricity, or heat. This presence has supported me and others to go beyond what was possible on our own. This connection in music has nourished and sustained me through most of my work of the past ten years, it has become both the aim and the means.

When really connecting with others, I’ve noticed another presence beyond me and the others—a subtle atmosphere, incense, electricity, or heat.

I didn’t anticipate this when I began to think about how to support others with music. Nor did I imagine that some of my happiest and most fulfilling moments making music would be working in this way.

If you’re feeling frustrated, angry or depressed about the world around us, you’re probably right. My suggestion to you is to (1) pick a problem right where you are, (2) focus your energy and attention on what you can contribute to a solution to that problem, (3) do what you can to support others.