To Upgrade or Not to Upgrade? A Notation Software Update

There have been big changes in the notation software market in recent years, and a lot of people are confused about what is going on and what the future might hold. So here are a few updates (if not upgrades) from the land of music notation software.

There have been big changes in the notation software market in recent years, and a lot of people are confused about what is going on and what the future might hold. Sibelius is dead, and Finale has been sold off? No more updates? Where did I put my old electric eraser and Pelican pens? As a professional engraver, I use this software 12 hours a day and am deeply invested in the state of things.

In April, Avid released a new version of Sibelius, loosely called Sibelius 8 although they are shying away from version numbers now. This is the first major upgrade of Sibelius with no new engraving features.

Yes, that is correct. No new engraving features. But if you use a computer that has a touch screen, you can now use a digital pen to annotate and mark up a score, in the same way you’d use a pen/pencil to mark up a printed copy.

Some of the common tablet/smartphone gestures will work on touch screens, you can navigate with the pen, and do rudimentary editing.

Despite this dearth of overall improvements, Avid has decided to maximize their income stream, so this new version starts a draconian licensing program where you pay a lot more for constant upgrades that may be of little use to those of us who focus on notation. Or you can purchase a perpetual license, but you must still pay a fee every year to continue receiving updates.

HOW DID WE GET HERE?

Notation software has changed our industry in countless ways. It eliminated some methods of music typography (e.g. the Music Typewriter and the Korean “Stamping” method). It has lowered the cost of music preparation and eased the ability to make changes to existing materials, provided professional tools to novices, and lowered the total fees paid for commissions which also typically included additional remuneration for copying costs since composers took over some of the tasks of materials preparation. This last item has often resulted in composers doing more of the work while being paid less.

However, I think we have grown a bit complacent and forgotten how fragile the software industry is. Professional music notation with computers came to prominence in the late ‘80s when SCORE was released and publishers found that it was well suited to many different types of music, plus it had a good system to create scores and extract parts. It also had excellent guitar tablature notation, which made it ideal for companies such as Hal Leonard. SCORE’s strength was that it found a way to divide all of the myriad notational elements and organize them into categories of items, which allowed for easy manipulation. It’s a primitive program with musical intelligence, and it’s primarily graphic based. If you have a 900-page score and insert a few bars at the beginning, there is no automatic update; you have to manually adjust things throughout, including page numbers, bar numbers, and layout. It was not particularly composer friendly, so it was mainly adopted by professional engravers and copyists. Some publishers used it in house—a few still do. 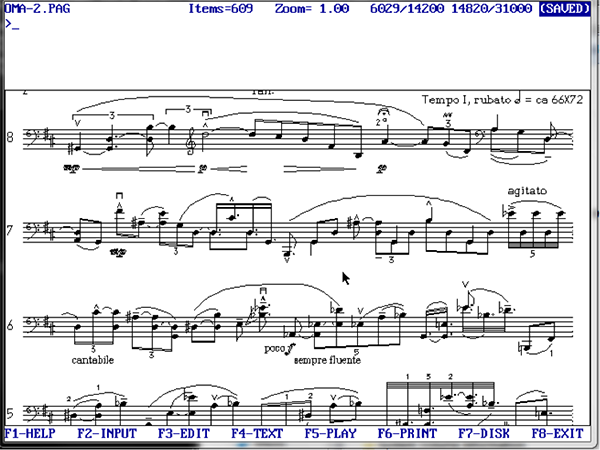 Shortly after that, Finale came along. It was slow and cumbersome, but it had a Mac and Windows version (SCORE only runs under DOS) and seemed more user friendly because it had a graphic interface with menus and tools to perform common tasks. 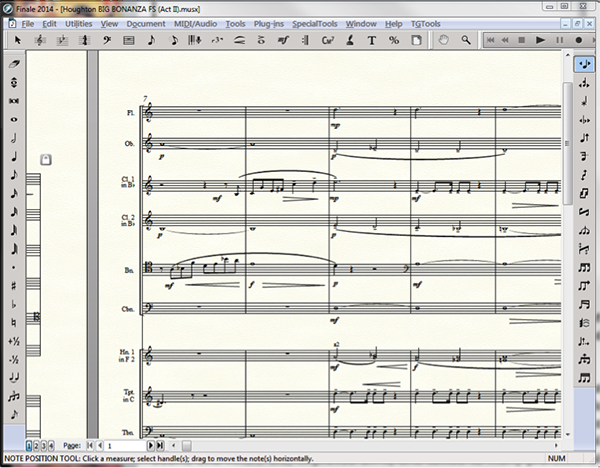 For many years, those two programs formed the basis for converting the industry to computerized typography. However, in 1998, twin brothers Ben and Jonathan Finn released a Windows version of their unique program called Sibelius. It was designed with the idea that we should have a “word processor” for music notation, which would also serve as a professional tool. They studied what SCORE and Finale did, improved on it, and talked to many professionals to gain a deeper understanding of the needs of the industry. The paradigm they developed—a program that is easy enough that a novice can use it, yet structured in a way that a professional can come along later and improve the quality of the notation, the look, and the layout—is still its most compelling, powerful feature. Try doing the same operations in Finale or SCORE and the work hours double or triple. 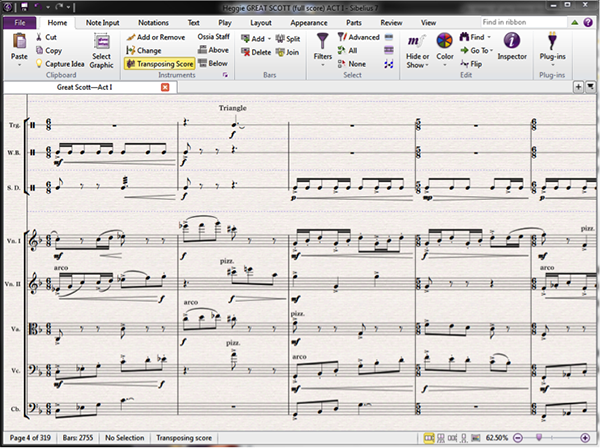 Sales of Sibelius and Finale are strong, particularly in the education market, and generate enough revenue that the companies that own these products (Avid for Sibelius, and MakeMusic for Finale) can afford to continue development and add features, support existing users, and maintain the software. Yet there have been big changes in these two companies.

MakeMusic has been sold to Peaksware/LaunchEquity Partners, and they have moved from their longtime Minnesota location to Colorado. Many people who were intimately familiar with the software left the company because of the move.

Avid decided to close the primary London office where the Sibelius development team worked, and all of the long-time programmers who knew the code intimately were let go.

Sounds grim, doesn’t it? Add to that the fact that there have been two releases of Sibelius with only minor or non-existent feature changes (7.5 and “8”), and it surely makes you wonder about the future.

MakeMusic has finally ended its once-a-year Finale upgrade cycle (which was designed to generate revenue, not to benefit users). The latest version released is 2014, and while they have announced a free 2014.5 update, it only offers some bug fixes and minor improvements. It still suffers from an old-fashioned ’80s-era interface that is dependent on dozens of palettes, requires the continual clicking on tools to accomplish basic tasks, and lags far behind Sibelius in important features like collision avoidance.

ARE THERE OTHER OPTIONS?

There are new notation products on the market, but most of them focus on tablet computing (like StaffPad). There are free programs like MuseScore and a few others that might attract users with very limited budgets.

PreSonus’s NOTION considers itself music notation software, but I haven’t seen anything done in the program that I would consider at a professional level. These programs can be fun and have potential, but I can’t imagine they will be adequate for professional engraving/copying work.

One company that hopes to upset the marketplace is Steinberg, the German firm that manufactures Cubase and Nuendo. They took the bold step of hiring the Sibelius team in London, and set them to work creating a new notation program. There is a lot of potential here. They are led by a very knowledgeable musician, Daniel Spreadbury, who was the brilliant manager for Sibelius. And the team he’s working with has created a notation program before, so they know the pitfalls. Since they have to compete with two very entrenched programs with lots of momentum, they need to build something better. They have studied some of the subtle aspects of music engraving, talked to many professionals, and have tried to learn what most notation programs still get wrong. I could write a very long article about this last item; it’s an area of deep concern. For example, horizontal spacing is poorly understood and no program has ever done it as well as plate engravers did 100 years ago. Every music notation program handles lyrics incorrectly (in terms of spacing), and vertical spacing/justification is equally problematic. Steinberg is aware of these things, and you can read about the work they are doing on Daniel’s blog.

They have also created a new music font structure (SMuFL) and created a free font called Bravura, loosely based on the old Not-a-Set dry-transfer symbols, which were in turn based on Breitkopf and Hertel’s engraving tools. Dry-transfer symbols are mass produced on transparent plastic sheets so they can be applied to a music page by rubbing the back with a burnisher. It was a common technique for autography that was used before computer notation software became prevalent. 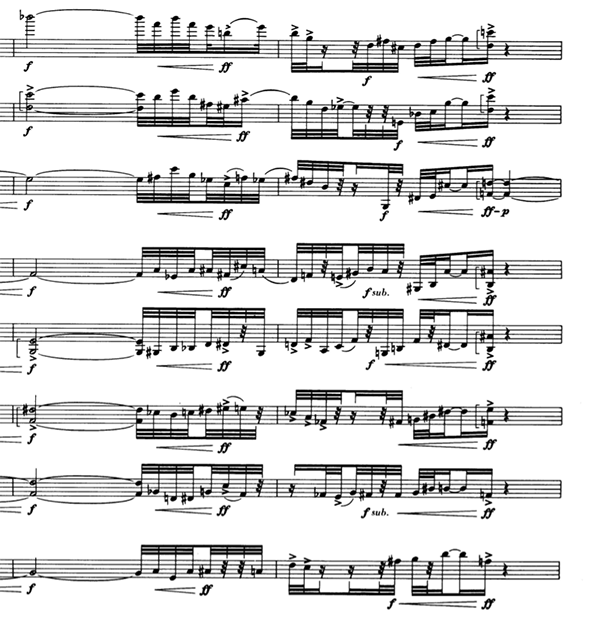 WHAT SHOULD YOU DO NEXT?

If you use Sibelius 7, I think that’s a good version to stick with for now. (That’s the version I use for most of my work.)

If you use Sibelius 7.5, that’s fine too. (This version added some small new features, but it also changed the file format, so it’s annoying to share files with people working in earlier versions.)

If you use Sibelius 6, that’s a little tougher call. It’s acceptable to work in, but there are some limitations and it’s now several versions back. I would recommend moving on from that version before long.

If you use any version prior to 6, I would recommend you upgrade to 7 or 7.5 before you get trapped in the version 8 licensing scheme. But act quickly, you’ll need to buy 7/7.5 from a retailer who has existing stock since Sibelius is no longer selling those versions.

Finale 2014d is pretty stable and it’s the version I tend to use for most projects. But opening old files in new versions of Finale can cause problems, or in some cases it won’t even work. Finale’s free NotePad is surprisingly the best choice for opening old Finale files and allows for simple editing.

Notation software is absolutely essential for virtually anyone who needs to write down a musical idea. I have about 70,000 music files on my computer, and I’d estimate 2/3 of them are in Sibelius format, the rest in Finale and SCORE format. I don’t foresee abandoning Sibelius or Finale any time in the future, and I am reasonably confident the programs will remain functional and useful, even if they don’t add any significant new features or fix the glaring problems that remain. Perhaps Steinberg’s entry into this market will shake things up and force some serious competition among all of the programs. Despite all of the grim news here, I remain optimistic and hopeful.

Bill Holab is the owner of Bill Holab Music, a company that publishes a select group of composers and provides high-end engraving/typography/design to the industry. www.billholabmusic.com