The View from the Bottom of the Heap

The composer faces a future more uncertain than that of anyone, except perhaps the poet. When school days come to an end, the composer mortality rate—not to mention that of their all too perishable idealism—is close to 100 per cent. I am one of the many in that uncertain middle ground trying to survive, pen in hand.

[Ed. Note: This essay originally appeared in the July/August 1966 issue (Vol. 8 No. 6) of Music Today, the newsletter of the American Music Center. Since Charlie Morrow brought it up in our conversation almost 49 years after it was originally published and those AMC newsletters are in our archive, it seemed like the perfect time to revisit it.-FJO]

From the moment graduation ceremonies end, the composer faces a future more uncertain than that of anyone, except perhaps the poet. As a student, one can glibly evaluate the world of professional music. The detachment is glorious but only because one is on the outside. Criticism is easy, on the arm of one’s teacher, because what is happening seems so clear. The hypocrisy of expedient allegiances and performances is glaring, because there is no professional involvement. But school days come to an end and the composer mortality rate—not to mention that of their all too perishable idealism—is close to 100 per cent. I am one of the many in that uncertain middle ground trying to survive, pen in hand. While what I say may seem old-hat to those who have braved the storm for years, perhaps some of my problems are relevant to all composers.

Having no independent means but a modicum of public acceptance, I was not ready to throw in the towel and do something else in order to compose. So I set out. A number of people had asked for pieces. Step one was to ask expenses. Printing and copying costs had made composing not just a thankless task, but a luxury. Some said, “No one else charges.” But most responded to an explanation of the problem. An appeal grounded in professionalism looked feasible.

The next step was to ask for fees based on the time involved in order simply to break even in terms of food and rent. No musician plays for nothing; asking anyone to pay for the right to perform would be absurd. Do we only get performed as a favor? We charge for lecturing. All issues of commercialism aside, one must live. People pay for published pieces, instruments, concert tickets and rented parts, without corrupting one note of music. We ourselves buy paper, scores and printing services. We must always be writing for ourselves, certainly, but if the dubious title of professional is to have any meaning, we cannot give away our work—and at a loss—unless a performance really is just a favor. Grants for performing groups might improve the situation by including composer expense allotments.

Everyone knows these facts of life. But such issues are irrelevant if there is no demand for the music. The lack of an obvious market should not deter one from devoting the full time it requires to the profession. Composers as a group have been overly cautious and shortsighted in promoting themselves. Interest in the arts is supposed to be blossoming, yet most of the energy spent on reaching audience goes into little projects, with little or no advertising budgets. It seems unlikely at this time that our society is going to take care of its artists, even as it does its unemployed, sick and aged; and resident composerships are rare. All the money spent on building concert halls, aiding orchestras and the like, helps the composer only indirectly. Other solutions are needed.

Mass media offer an opportunity to reach the greatest number of people, (the commercial, not just the educational media), and all media do inform the public. At present, concert pieces have little hope of being filmed or televised. But the possibilities in theater music, film score, TV-score, advertising, and educational material are staggering. As a rule, “commercial” talent dominates these fields, but only because these people are looking for the work, and often come to be in decision-making posts. The serious professional composer understands sound and its possibilities—dramatic, expressive, constructional—better than any tunesmith. Yet when composers look for work, they change their style. How absurd, when what they are best equipped to write would do the job better!

While the major developments in much new music must be presented by professional specialists, much can be accomplished in commercial situations, and perhaps with a wider educational effect. Not to mention, of course, the wealth of theater and semi-improvised material that is both up to date and accessible to players ranging from grade school groups to adult amateurs. Projects like the Ford Foundation’s “Composer in the High School” are steps in the right direction, but the problem goes all the way down to the primary grades. This is where minds can be opened up. In dealing with this “market,” the publishing industry, if not our educators, are committing a grievous error by failing to use, let alone understand, the talents of our most gifted and imaginative composers. Children respond more readily to enthusiasm and creative spirit than to method.

Most of us are introverts, but there is no reason why there must be only a few channels for performance, most of them self-generated. These are good, but they are not enough; they can make our introversion incestuous (if they do not perform a broad spectrum of styles and a broad service). Building local contemporary ensembles and conning travelling groups into doing our pieces, the one time they play the job we book for them, is hardly good community relations. It may be fine for those who write very small amounts of music each year. However, the stylistic crisis arises anew with each piece for many of us, so that progress is often slow and the product difficult to perform. For this sort of individual, the university and its programs offer unique sanctuary. And even in the university, much more could be done. Workshops in theater, dance, and mixed media (music with lights, film, etc.) could support many composers on at least a part time basis.

But there is both a need and a place for the professional, unaffiliated composer, especially if he is prolific and willing to take risks. This goes far beyond having relatively apolitical people in the field, for we all have biases; there also is a need for self-esteem and social definition if not a community role. Society seems to have come full-circle, since the decline of patronage, to a point where its structure can again support high-class art. At present this possibility exists mainly in the area of functional art, but if the standards are raised there, the future might be very rich indeed. Clearly there is work to be done, and work that can bring at least a meager livelihood and perhaps some social change. If enough of us try, maybe something will happen. 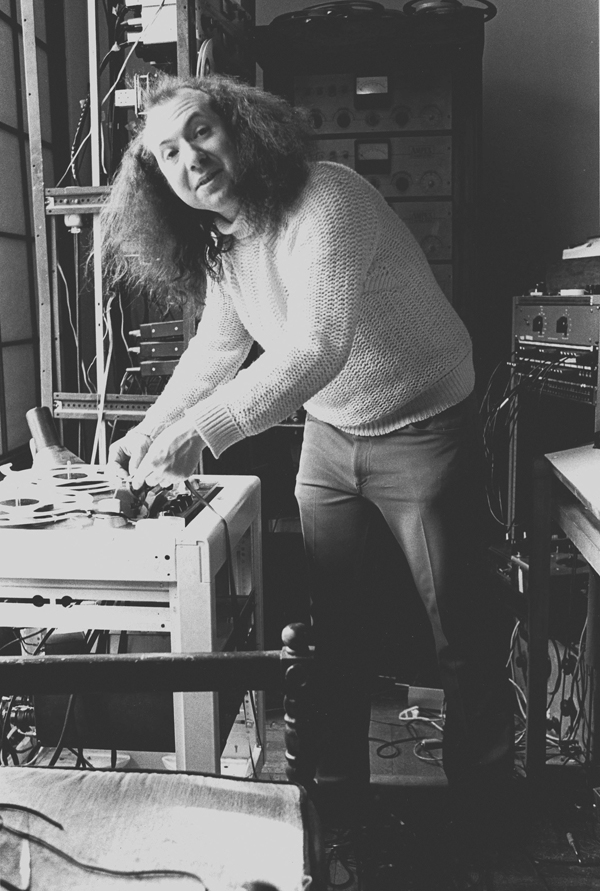 Charlie Morrow at his NYC studio, circa 1969. Photo courtesy Charlie Morrow.
(NOTE: This photo, taken three years after the article was originally published, did not appear in the original publication.)