Born and raised in Austin, Travis Weller came up playing violin and listening to all sorts of music, eventually gravitating to sounds and instruments that were well outside the norm. We’ve talked about composition, performance, and curation, but I’d never taken the time to speak with him about the instruments he builds. To remedy that, we sat down and talked about three of his creations: The Owl, The Skiffs, and The Steel Bells.

When I moved to Austin 13 years ago, I’ll admit that I came for the weird. In my defense, the official “Keep Austin Weird” phrase was coined just after I arrived (a coincidence, I’m sure) but it was, and occasionally still is, an appropriate moniker. I’d had a few professors who had studied at The University of Texas and spoke in hushed tones about what a wonderful time they had here in this strange and unique city. Many of these discussions were not centered on music necessarily, but rather the feel of the town—a place where you could just forget about what was going on in the rest of the world and do whatever you liked. When music did come up, a few venerated venues, annual festivals, and gatherings would populate the discussion, along with mention of various musicians who set the tone for the city and the times. Among these were Ellen Fullman’s performances on the Long String Instrument at the Candy Factory in the early 1990s.

Fullman’s instrumental design concepts for the LSI were influenced by Lucier’s Music on a Long Thin Wire from the previous decade, and they had an impact on a young musician named Travis Weller. Born and raised in Austin, Weller came up playing violin and listening to all sorts of music, eventually gravitating to sounds and instruments that were well outside the norm. Over the years, Weller has not only developed his own compositional voice and instrument designs, but he has worked with Fullman on a number of projects. He is also a regular performer and curator of contemporary music. As a co-founder of Austin’s New Music Co-op, Weller helped establish a regular clearing house for the composition and performance of experimental music, as well as for the exploration of important late 20th- and early 21st-century works. I’ve known Travis for several years, and we’ve talked about composition, performance, and curation, but I’d never taken the time to speak with him about the instruments he builds. To remedy that, we sat down and talked about three of his creations: The Owl, The Skiffs, and The Steel Bells. 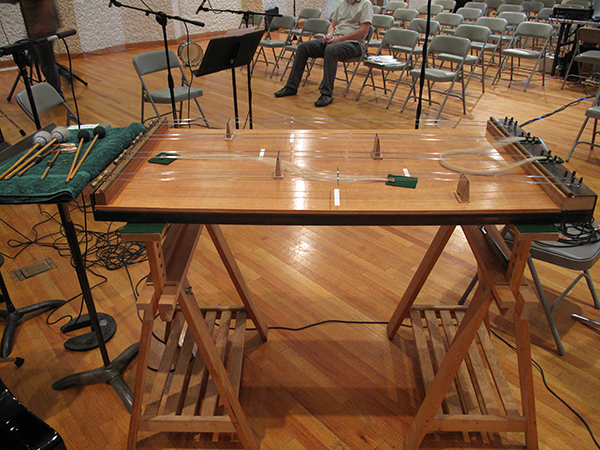 The Owl in the Mexican American Cultural Center in Austin


Travis Weller: The Owl was a convergence of a bunch of ideas. It didn’t even start by wanting to build an instrument.
I really love Cage’s prepared piano music, and his piece Fourteen which calls for a “bowed” piano. I’d also been working with Arnold Dreyblatt, who uses piano wire on his contrabass. There were so many great timbres coming off this high-tension wire, but it’s locked up in the piano. The piano is really difficult to move and it’s difficult to get around and in between the strings. You never know when a piano will be available in a particular venue. Plus, the speaking length of the strings varies from piano to piano and so it’s hard to know what you’ll end up with. This can be great fun, but it isn’t always what’s called for in a piece. Cage really embraced the indeterminate element, but sometimes I want that one perfect sound. So really, I wanted to have something that gave me easy access to those sounds. It’s still a pretty big instrument, but you can load it into the back of a car by yourself! In the design process, I made sure I could change the speaking length of the strings via moveable bridges to allow may different tunings, including microtonal ones.

Andrew Sigler: Do you re-tune at all during performances?

TW: I don’t because I typically tune the instrument very precisely. And moving a bridge doesn’t just change the tuning of a particular string; it also changes the tension of the entire instrument and that impacts the tuning of the other strings. When I worked with Ellen Fullman in 2011, we spent days moving the bridges of the Owl in a way that aligned its tuning with that of the Long String Instrument (for the Music in Architecture/Architecture in Music Symposium). 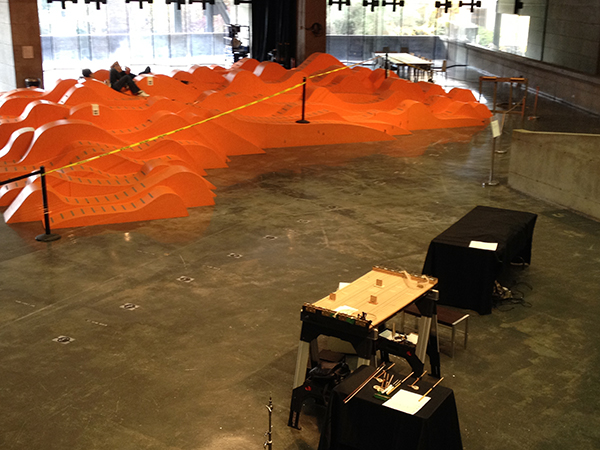 The Owl in the Berkeley Modern Museum


While I was really inspired by Cage and Dreyblatt, so much of the construction of the Owl is based on piano technology. Years ago, I encountered the monochord, an instrument with adjustable bridges to demonstrate mathematical relationships between sounds. When I was thinking about this “piano-wire contraption,” that ended up being a good jumping off point. I started sketching things out and tried to make one from wood, which broke, as the tension was too great.

AS: Did it break apart in a dramatic fashion?

TW: No, it just slowly ripped the wood apart. As you would start tuning it up, you could hear it crunching and cracking! After that, I talked to my friend Brian Frisbie, a metal artist, who taught me a lot about metals and working with tools that can cut metal. 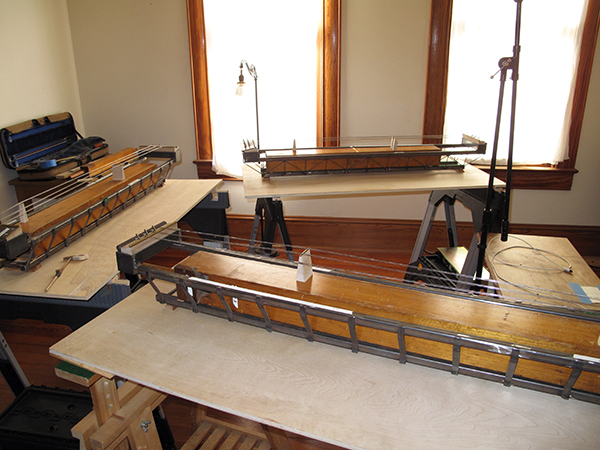 AS: Did you have a background in building and so forth?

TW: No, not really. I just picked skills up here and there. I’ve been working on my old house for over a decade, and that has taught me a lot. Apart from that, I just learn what it takes to complete a project as I go along. And I’ve always enjoyed tinkering with things.

AS: Did you take shop class or anything like that?

TW: No, no classes. I love learning from people one-on-one. Folks are often really excited about sharing their skills. Sometimes, they’re interested in the project, so it leads to a collaboration of sorts. Welding is a great example. I don’t do any welding yet, so I always get help in that department. But I hover and learn a lot through the process. I do what I can with the equipment I have, but I know my limits and when to call in reinforcements. Norma Yancey, an architect, and I collaborated on the Skiffs. They are three instruments that borrow a lot from the Owl. We worked together to get a viable design. I fabricated the parts like the angled pin blocks, and she welded things together. 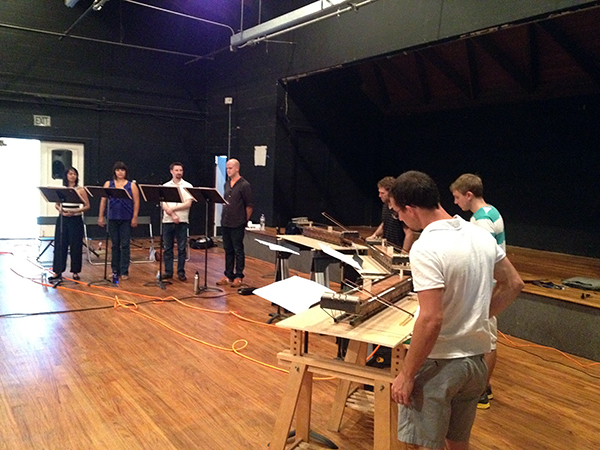 
AS: What do the Skiffs do that the Owl doesn’t?

TW: The Owl is very wide and is based around a flat soundboard. The Skiffs have three pairs of strings instead of eight, which makes them more portable. They also have a resonant chamber, originally wooden organ pipes, instead of just a soundboard. I’m currently experimenting with a new set of resonators for the skiffs that might replace the organ pipes. The pipes work fine, but they aren’t as resonant as I’d like.

AS: Are you doing this in a shed in the back of your house? Do you have the mad scientist shed?

TW: Yep. I do most of my work in the backyard by the shed. My workspace, like the instruments, is a work in progress. 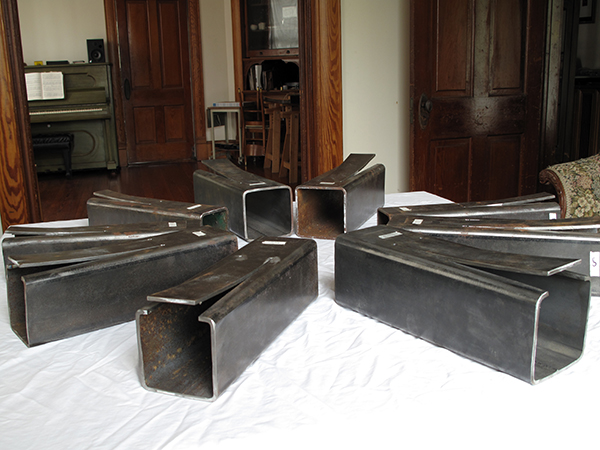 
AS: How about the Steel Bells?

TW: I’ve been working on various iterations of the bells for many years. They are essentially lamellophones, like a giant kalimba where each tine is independent. They can be struck as well as bowed, and you can get very precise with their tuning.

AS: What were you going for in terms of sound/playability with them? For instance, the Owl/Skiffs were a response to difficulties inherent in prepared piano performance.

TW: I started experimenting with them simply because I liked the timbre of similar instruments. Once I started exploring, I discovered all sorts of new tricks they could do, like how they sound so amazing when you use a violin bow on them. After years of grinding away on them (I’ve made dozens) I feel like I finally have a pretty good feel for how to make them sound good. 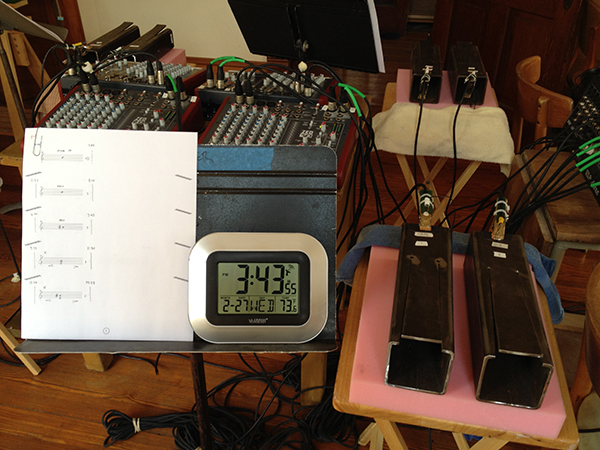 AS: Could you talk a bit about their construction and how the electronics fit in?

TW: They’re cut from large pieces of scrap structural metal. I used a drill press and an angle grinder. They are acoustic instruments, but contact microphones bring a whole new family of sounds out of them. Earlier this year, I used contact mics to send audio from the bells to a low power FM radio station in my piece Concerto Laguna. 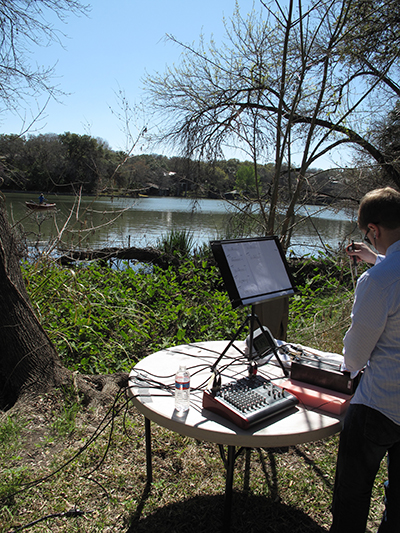 
AS: What are you working on right now? Are there any other instrumental designs or other projects you have on the horizon?”

TW: This week, I’m finishing up the score for a project that incorporates several of my instruments; Owl, Skiffs, and Bells plus violin, viola, and cello. I’m in the middle of major changes to my work space, so it’s been doors and windows as much as instruments the past few weeks. On top of that, I’m getting my instruments ready for a performance coming up on October 19 with Ellen Fullman at the Contemporary Arts Museum in Houston. I’m really excited about that one!