The Ties that Bind, Part II
NewMusicBox
Written By

The Ties that Bind, Part II

Out of all of the possible composer-in-residence responsibilities discussed in my early conversations with the Reno Philharmonic, education made me the most nervous. But due to a strong, long-forged partnership between the orchestra and the local school district, it became clear that a large focus of my time in Reno would be devoted to facing my fears. As we began shaping our plans, I began researching. 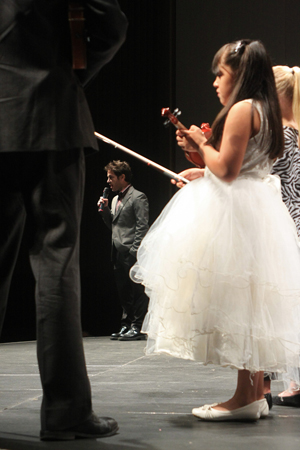 In my last NMBx post, I explored what I believe to be some big issues surrounding notions of community on the part of arts organizations in the U.S., and titled the essay with a “Part I.” At long last comes “Part II,” which was always intended as a reflection on what my experiences with “the hazy nebulae of education and outreach” in my residencies with orchestras have taught me. I said that I was in for lots of surprises. Very true. But since July 11, I made another trip to Reno (continuing my tenure as the Reno Philharmonic’s first composer-in-residence), and I now have even more thoughts to share. We (Reno Phil President Tim Young, Music Director Laura Jackson, Education staff Amy Heald and Grace Hutchinson, and myself) spent time and effort taking those surprises and doing our best to capitalize on them: moving from a general introduction—“Hey everyone, here’s a composer!”—in my first season, to something deeper—“Maybe composing is interesting?”—and finally, working toward a definite goal—“Let’s compose.”

Out of all of the possible responsibilities discussed in my early conversations with Tim and Laura, education made me the most nervous. I had my reasons. My family still points out that I wasn’t really ever a kid even when I really looked like one, and I’ve barely spent any time amongst them since. How do I talk to them (a genuine concern!) and how could my work be interesting to them? And really, how would I frame a class or activity to find the right balance: I wanted to walk out knowing that they had learned something, but I really wanted to replicate my own outreach memories; I wanted to connect.

Every residency is different, and it became clear, due to a strong, long-forged partnership between the orchestra and the local school district, that a large focus of my time in Reno would be devoted to facing my fears. As we began shaping our plans, I began researching. I talked to Derek Bermel and Andrew Norman, composers who’ve had experience with composing and kids. I re-read Belinda Reynolds’s posts on NMBx about working with and composing for kids, and I talked to lots of people with lots of experience, like Ralph Jackson and Steven Stucky, about presentation. How much is it about my story, and how much about them? (About 10%/90%, it turns out.)

We cast a wide net at first. Last season I spent time with students at the University of Nevada, speaking in composition classes and to the entire music department, visited and chatted with the Philharmonic Youth Orchestras (of which I was once a member), and worked in classrooms with students from varied backgrounds at the high school, seventh/eighth grade, and third grade levels. I also worked closely and observed an elementary after-school program of the Philharmonic’s, which puts string instruments in the hands of kids as young as five years old. My conversations and approaches were different for each group, and overall I was surprised at how responsive the kids were, although there were some frustrations on my part. I felt openly disrespected at one point, and made it clear to organizers afterward that I did not intend to return. And nope!—the attitude didn’t come from a bunch of rowdy 13-year-olds as I might have guessed; in this case, the offending parties were paying by the credit-hour to be there. It certainly made me aware of my expectations for different audiences, and it’s possible that the 13-year-olds would have gotten more of a pass in my mind. At every turn, I was reminded that I did possess a skill set, and I thoroughly depended on my classroom teaching experience in graduate school; reading the room, setting the pace, when to dig in, when take the reigns, when to relax, when to interject, when to stop talking.

Everyone told me, “The third graders will be the best. They’ll be your favorite!” I couldn’t believe them, but oh, how right they were. Brimming with positivity and curiosity, able to focus and happy to work together, they are shrewd and sweet at the same time. An early moment, as I was coming around to speak with them in small groups, with three girls, sitting upright, cross-legged on the floor:

Me: “So, ladies, are you ready to share your ideas for your group piece with the whole class?”

Them, completely ignoring my question, and staring intently: “How old are you, Sean?” (They leapt at the chance I’d offered not to call me by Mr., of course.)

(aback) “Well, you three are all 8 or 9 right? I actually left Reno before you three were born. I’m pretty old.”

Oh, how I loved these kids: wide eyes, a hand shooting in the air, fleeting moments of self-satisfaction and disappointment throughout the class, and when it came time to listen to music, a hush and a focus. Their insights about what they heard were amazing to me; their intuition led them toward the conclusions I’d expect much more quickly than the twelfth graders, who second-guessed themselves. 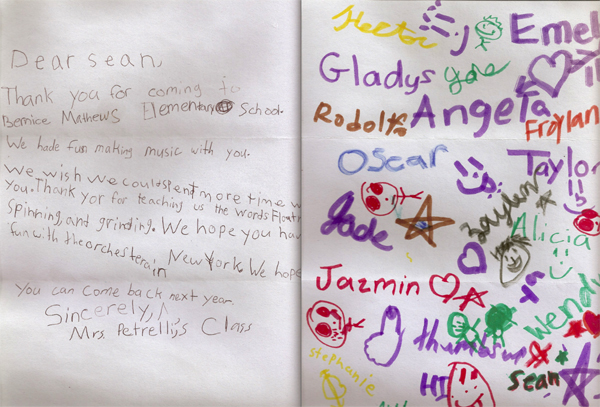 Treasured correspondence: Thanks for the memories. Image courtesy Sean Shepherd.
This fall, we took a look at areas where my longer stay and some specific planning would prove to be most useful. I wanted to work with 9-year-olds again, and we developed a larger project, with homework and group work, bridging vocabulary and sound and, in the end, encouraging the students to think abstractly about a concept and responding creatively to it. We were composing. A pet project of mine—seeking out and mentoring young composers, who, like myself years ago, were excited about stretching their wings—also came to fruition on this year’s annual Philharmonic family concert (theme: Composers!). A piece by a 13-year old named Paul was programmed and performed by the orchestra: the culmination of months of his composition work, email attachments, phone conversations (involving transposing instruments, part formatting, percussion writing, Finale fixes, the frustrations of Kinko’s, etc., etc.), a reading by the youth orchestra, a rehearsal by the Philharmonic, an on-stage interview, and lots of edits and changes. I felt privileged to be witness to so many firsts and “A-ha!” moments for a composer, and distinctly remember a similar feeling while escorting him back into the hall after his piece was performed. The first time hearing an orchestra play his music, his first applause: it was an out-of-body experience for him, and he seemed to have momentarily lost his sense of direction. He just needed a little help finding his way back to his seat. 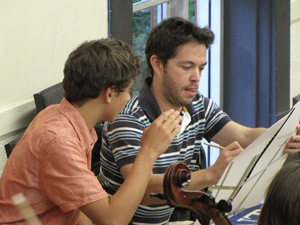 That family concert provided another special moment: the culmination of another composing project; this time with students in the advanced group of Celebrate Strings (the Title I School after-school strings program spearheaded and funded by the Philharmonic), who arrived dressed to the nines for their first time in the concert hall. We had spent two weeks working on a variations project, taking a tune out of the Suzuki book that everyone knew, and composing variations (all by ear and from memory) using devices like mode mixture and changes of textures/techniques. The two most advanced students, fifth graders Julien and Javier, composed a few solo variations of their own, branching out harmonically while the rest of us devised an appropriate accompaniment. This was the boys’ second appearance with us onstage; Julien, already the professional, wondered aloud if and when they would be getting paid. This group of musicians played for a captivated audience full of their peers (children of all ages were welcome to bring their families along, and if you’d assume that a concert hall full of 2-11 year-olds isn’t a discerning and attentive audience, I’d stand to correct), and behind them sat the beaming faces of the members of the Reno Philharmonic. I also had a piece performed on that concert, and never did I pay so little attention.

Earlier that morning, I had spoken with Laura at an impressive triennial conference on art and environment at the spectacular new home of the Nevada Museum of Art, giving a talk about the importance of place in my work to a room full of fellow serious artists from around the world. And during those weeks, I had donor lunches and drinks with the musicians of the orchestra. I hosted a pre-concert social gathering for young professionals in Reno and thanked them for their continued curiosity and interest in the arts, and attended several beautiful events in my honor at extremely beautiful homes and thanked the hosts for their support of the arts. I spoke to the board about my work and my plans and gave lots of pre-concert lectures and onstage teasers. On the phone, via email, on camera, in the classroom, in the studio: I gave a lot of interviews. I wrote two pieces.

But if you ask me now what being a composer-in-residence has shown me so far? In seeing kids from ages 5-18 respond to music and to sound (often of my making), I’m gleefully reminded that what I do can have a visceral and immediate impact on those who are curious. I remember that sometimes the thing you fear is thrust at you right when it will do you some big favors. And I learned, all over again, that in art, it’s 10% me/90% you; a pretty good equation to remember.