The Sublime in Bowling Green
NewMusicBox
Written By

The Sublime in Bowling Green

Last weekend, I had the distinct pleasure of visiting Bowling Green State University in Ohio in order to experience the MidAmerican Center for Contemporary Music‘s New Music Festival 2011. I was heartened to enjoy the camaraderie among the dozens of composers who came from as far away as Germany and Holland to enjoy the performances, and was astonished at the major figures on the new music scene.

Last weekend, I had the distinct pleasure of visiting Bowling Green State University in Ohio in order to experience the MidAmerican Center for Contemporary Music‘s New Music Festival 2011. I was heartened to enjoy the camaraderie among the dozens of composers who came from as far away as Germany and Holland to enjoy the performances, and was astonished at the major figures on the new music scene—Hey, look, it’s Eve Beglarian!—who took the time to be involved in the proceedings. The organizers, Jacqueline Leclair and Kurt Doles, kept everything running smoothly and elegantly, while the local faculty composers, Christopher Dietz, Michael Kuehn, Elainie Lillios, and Marilyn Shrude, were gracious hosts.

After hearing 44 pieces over nine concerts, I can report that it was a fantastic festival. Nearly every single piece had something important to offer, some way to recommend it, while a few stood out as being major events in and of themselves.

For me, one of the more pleasurable aspects of this festival was the opportunity to hear a huge swath of the featured composer David Lang’s music. I’ve been a fan of his since I first discovered Bang on a Can’s recordings in the early 1990s, but had only rarely been able to hear his music live (most memorably in a performance of the Little Match Girl Passion on the Evolution Series in Baltimore). Three of his pieces, one from the first concert and two from the final event, stood out for me as a listener. His c. 40-minute long percussion work The So-Called Laws of Nature was presented in its entirety in a performance by a quartet of students (Rob Ciesluk, Mark Cook, Stephen Klunk, and Ellery CG Trafford) that was both elegant and deeply committed. This piece gradually grows in volume and intensity through the first three movements, then shifts into an unexpectedly quiet sound world for its finale that ups the ante through its unique sound in a way that brings the intensity beyond what I would have thought was possible. On the final concert, Lang’s Again (After Ecclesiastes) for choir and his orchestra work Grind to a Halt created perfect bookends in their dialectical approach to human suffering, the former a gentle acceptance while the latter rages in a way that I personally found created such an extreme endorphin rush that I was grinning from ear to ear hours later.

On an entirely different surface aesthetic bent from the Lang pieces (but absolutely related on a deeper level in their uncompromisingly powerful individual compositional voices), Salvatore Sciarrino’s La Bocca, I Piedi, Il Suono for saxophone quartet and 100 additional saxophones was an incredible musical experience. First, the 100 saxophonists surprised innocent bystanders with a performance in the school’s student union—on Homecoming weekend no less. I shot a little video during this performance (posted below) giving a sense of the beautiful mayhem they created. About an hour later, they reconvened as part of an official concert in the main recital hall. First, the members of the River Rouge Saxophone Quartet—John Cummins (who also beautifully performed a piece of mine earlier in the festival), Noa Even, James Fusik, and Elissa Kana—invited audience members into Sciarrino’s sound world with the long opening section which they performed with great musicality and confidence, antiphonally surrounding the listeners. When the 100 additional saxophones eventually entered and walked through the crowd the experience went from the beautiful to the sublime and ended far too soon.

The other highlights of the festival were both courtesy of Mantra Percussion. First, they presented the U.S. premiere of Michael Gordon’s Timber, a one-hour long work for six percussionists, each of whom plays a single piece of 2×4 wood. The work itself was absolutely stunning, clearly transcending the limitations of its unique instrumentation. But in this presentation, it was as much a piece of theater as of music. The percussionists stood in a circle, each with their strip of lumber on a sawhorse and their music on a laptop. The main lighting was very dim, red-gelled floor lights, but they had rigged up a system (created by Jim Findlay) so that when an individual player’s volume would pass a threshold, a brighter floor light would illuminate the face of the percussionist who had that main material. In the opening several minutes as an idea was passed around the circle of players, this lighting effect created a brilliant opening, allowing us to experience the aural and visual aspects as a single unit. The performance itself was an incredible display of unified virtuosity by the Mantra percussionists. Most of the piece created a sustained sound through constant mallet rolls, but the limited resonance of the wood allowed every individual hit to be heard as clearly articulated. The six players were so tightly together that throughout the piece these rolls were never perceived as a mass of sound, but rather always as a series of single notes at a blindingly fast tempo. The picture below is from a rehearsal of Mantra performing Timber. 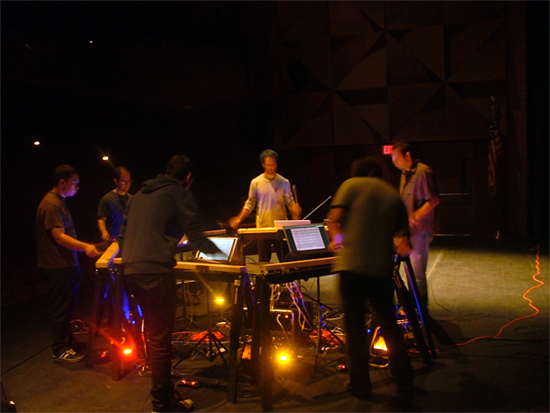 Early the following morning, Mantra reconvened, this time in order to perform the works of several high school students from the Toledo School for the Arts. This concert was the culmination of a year-long project on composition and creativity sponsored by the MACCM. It was incredibly heartening to hear the virtuosic musicality of the Mantra players brought to bear towards the realization of polished works by burgeoning composers. Almost all of the visiting guest composers took the time to attend this concert, supporting the young musicians and inviting them into the greater compositional community. The picture below is of Jude Traxler from Mantra Percussion coaching the student composers before the concert. 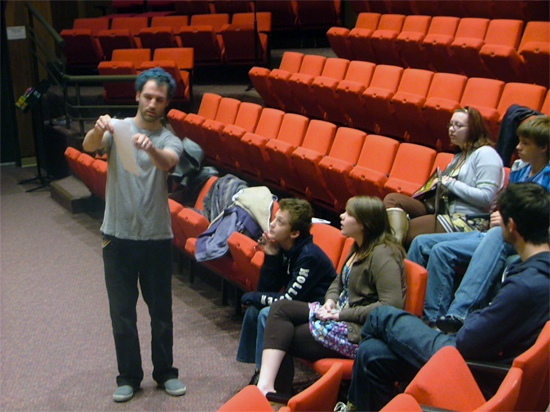 I hope to be able to catch more of these festivals and suggest that everyone in the area plan ahead for next year’s rendition which will feature John Luther Adams and his music.