The Soundbridge Project: Classical Music Out Of the Halls
NewMusicBox
Written By

The Soundbridge Project: Classical Music Out Of the Halls

I do, on occasion, enjoy putting on a coordinated outfit and drinking from something with a stem prior to my fiddle intake, but for me this is more of a Thanksgiving/Presidents’ Day once-a-year deal than a monthly water bill situation. For my regular listening, I prefer smaller, less formal venues, and fortunately I’m not alone.

Look, there are plenty of lovely places to hear folks play their fiddles, trumpets, and Macbooks. Concert halls abound, and many of these have been around fuh-ev-uh. For the most part they are thoughtfully designed and perfectly suited for soaking up all the sonic goodness on display, all from the comfort of a relatively plush chair and with just the right amount of attitude adjustment that a frighteningly overpriced glass of chardonnay has to offer.

So why are we always trying to pry classical music out of those cold, dead hands [1] ?

Probably because there is a large contingent of folks out there who would like to hear these pieces sans just about all the stuff above. I do, on occasion, enjoy putting on a coordinated outfit and drinking from something with a stem prior to my fiddle intake, but for me this is more of a Thanksgiving/Presidents’ Day once-a-year deal than a monthly water bill situation. For my regular listening, I prefer smaller, less formal venues, and fortunately I’m not alone.

P. Kellach Waddle has established himself as a composer, bassist, and local impresario (not necessarily in that order), and over the last few decades he has had a hand in a wide variety of multidisciplinary projects involving all sorts of Austin institutions. Live music with film at the Alamo Drafthouse Cinema, music about wine with Grapevine Market, and Banned Books at Book People are just a few of the projects that Waddle has directed and performed in over the years. His latest is “The Soundbridge Project,” which he developed with flutist Lauryn Gould at Cherrywood Coffeehouse.

The most recent Soundbridge show started with Waddle (Gould could not participate in this particular event) introducing the first of three sets of music. Each set featured something old and something new, and in the case of set one all the new music was written within the last 20 years and some “as recently as eleven days ago.” A few short works for bass were followed by several classical duets for horn performed by Jenni Wieland and Leah Morgan Durrett. 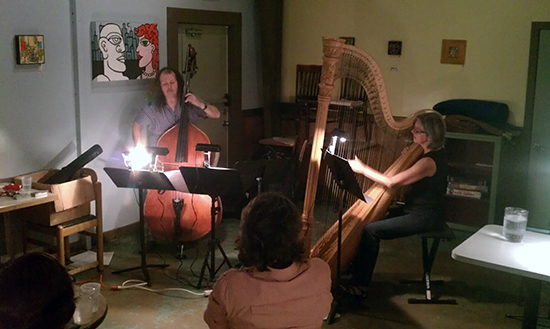 After a short break, Waddle returned to perform music featuring bass and harp. The first work, Waddle’s Abandoning The Edge of The San Antonio Sunrise: Impression-Satz for bass and harp made a somewhat disconnected and blurred impression. Ostinati in the bass would form and disappear quickly, while long gestures in the harp performed by Austin Symphony Principal Harpist Elaine Martin Barber would lead to brief moments of consensus between the instruments before they went their separate ways. The whimsically titled (a descriptor which could describe virtually any Waddle tune; the guy does not simply write “Sonata for Bass”) Cereal Music: Sonatina in Three Movements after K. Vonnegut’s Breakfast of Champions made a play on serialism/cerealism with very subtle nods towards Arnie’s school in the harmonic content and a few towards Kellogg’s camp in the movement titles. Movement one, “Blueberry Morning,” featured driving arpeggios in the bass trading with bright chords in the harp. The multi-stops in the second movement, “Frosted Flakes,” played nicely against the loping arpeggios in the harp, and the hidden gigue in the third movement, “Lucky Charms,” was quite attractive, though both were hidden at times in the rise and fall of the sounds surrounding the performers. This conflict was an issue from time to time throughout the show. The performance space at Cherrywood is located on one side of a large rectangular room and is separated by a low wall which reads a bit like a long breakfast bar. While this provides a great physical separation for the performance space, it does little to facilitate the separation necessary to hear music with a wide dynamic range; a characteristic that describes most “classical” music. I was torn at times between the charm of the venue and its patrons and the combined volume of the two. 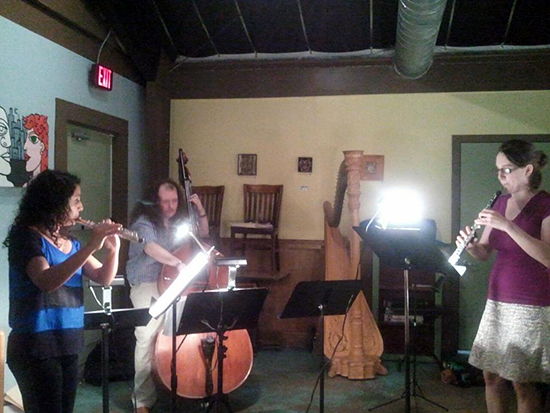 The last set for flute, oboe, and bass featured Waddle joined by flutist Seetha Shivaswamy and oboist Rebecca Marie Fairweather Haskins in the world premiere performance of Waddle’s KaffeeTraumen; Dreams of Coffee: Trio in forma di 6 Impression – bagatelles for Flute, Oboe, Bass, an ode to the black stuff, as well as a variety of trio music by L. Mozart, W. A. Mozart , and Stamitz. KaffeTraumen was in six movements, the first moody and shifty with subtle interplay in the winds and with the bass in its traditional role, the second peppered with quasi-neoclassical quirks—rhythmically engaging and harmonically inviting. The fourth movement loosely described the nightmare of a house without coffee and was followed by the relief of coffee returned. In the final movement, Shivaswamy and Fairweather Haskins ran a relay race in slow motion, trading lengthy lines back and forth while Waddle maintained his supporting position.

It was a well portioned show with sets of a length (approximately 15, 30, and 30 minutes respectively) that held the audience’s attention while providing the occasional break. The traditional 60 minute first set, 15-20 minute intermission, and 45 minute second set that you often find in concert settings has never sat well with me. I always feel like the long intermission takes me too far out of the experience. The set organization for this show shared a certain kinship with the pacing of television (gasp!) with the shorter breaks reading more like commercials. I’ve lately been of the opinion that one long set is the way to go, but the shorter multi-set arrangement allows for breaks and shorter concentrated shots of music while also giving the audience an opportunity to show up after the first set or leave before the last set. And while presenters naturally want the audience to stay for the whole show, the multi-set concept does perhaps take the pressure off someone whose dance card might be a bit full that night and who would otherwise have to bow out altogether. Of course, this isn’t really an option in the larger and more opulent halls, but venues like Cherrywood are more flexible. As long as Waddle and Company continue presenting compelling shows that combine music with the character of the venue, I suspect people will keep coming out to check out the performances.

1. Their hands are neither cold nor dead, so lighten up people.