The Silent Treatment
NewMusicBox
Written By

Chalk it up to the fact that I grew up in midtown Manhattan, but silences somehow seem unnatural to me since I so rarely have heard them. 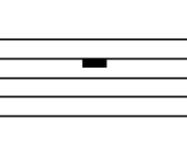 This is something that rarely occurs in my own music.

Though I consider myself to be a huge fan of John Cage and found Tim Rutherford-Johnson’s essay “Some Recent Silences” extremely thought provoking, there are very few rests in any of my own musical compositions. I still remember showing some relentless scores of mine to the late Dutch composer Peter Schat and his being shocked by the absence of pauses in them, more in a negative way than a positive way as far as I could tell.

Chalk it up to the fact that I grew up in midtown Manhattan. It’s long been called “the city that never sleeps,” and I hardly ever did soundly. To me, silences somehow seem unnatural since I so rarely have heard them. I also never really learned how to be quiet. As an elementary school student, I was frequently reprimanded by teachers because I was constantly talking. About a decade ago, I made some attempts at practicing meditation; I was ultimately unsuccessful. To this day, I find it very difficult to sit still and shut up.

Of course, the lesson of Cage’s silence is that the absence of planned sound is by no means silent. Kyle Gann’s seminal book on the landmark “silent” piece, 4’33”, is tellingly titled No Such Thing as Silence. And the same argument could be made for the Cage-foreshadowing “In futurum” from Erwin Schulhof’s absurdist 1919 Fünf Pittoresken (which consists exclusively of notated rests), the post-Cage conceptual compositions of Sergei Zagny (in which sounds are suggested to listeners even though none actually occur), and all the other repertoire Rutherford-Johnson unearthed in his fascinating overview of a whole century of silent compositions. Perhaps even the 20 minutes of complete silence that followed the 20 minutes of a single tone played by a 10-piece orchestra for French avant-garde artist Yves Klein’s Symphonie Monoton-Silence is ultimately not completely quiet either, even if total silence was apparently his intent. Klein described wanting to provide his listeners with “the possibility of true happiness” as a result of being released from the monotony. But the release from that sound was also not silence, since the absence of the sound somehow allowed it to reverberate inside people’s minds.

The above video footage shows a 2007 performance of Klein’s Symphonie Monoton-Silence at the Vienna Modern Art Museum. It lasts a mere ten minutes and is missing the blue paint drenched models who slithered across canvasses during the work’s 1960 premiere at the Galerie Internationale d’Art Contemporain in Paris, but it should nevertheless give you the idea.
I’ve experienced that phenomenon a few times following performances of music that involve a great deal of stasis. One of my favorite musical memories is the seemingly more-than-a-minute long silence that occurred between the end of the New York premiere of David Lang’s The Passing Measures and the audience’s resounding applause. I’m actually not exactly sure how long that pause was (I did not time it), but the conductor clearly held out for as long as he possibly could and it was exhilarating. A similar state occurred at the conclusion of a performance I heard of La Monte Young’s Just Charles and Cello. The audience was instructed not to applaud after Charles Curtis’s final bow stroke but rather to exit the space quietly so that the music would remain somehow. They did and it did.

So while I have long had a great appreciation for these cadential silences, pauses within pieces of music have been a bit more elusive. I’ll often notate pitches for a longer time than they can be held comfortably, being perfectly fine with the inevitable silence that will be needed to take a breath in a performance but not wanting to proscribe precisely where that silence will begin. However, last week during one of my 6:00-8:00 a.m. composing sessions, the only thing I wound up composing that entire morning was a measure of silence. It might seem like a small accomplishment, but for me it was probably one of the most difficult measures I’ve ever written.