The Realm of the Senses
NewMusicBox
Written By

The Realm of the Senses

Last night I embarked on a completely new (at least for me) experiential adventure: a jaunt through various perfume counters in an effort to figure out if my experience of their wares could in any way be analogous to the way I perceive visual art, literature, film, or any of the performing arts—obviously, most of all, music.

“We search for visual beauty in art and in nature, and take care to arrange our homes in a way that pleases the eye. We seek out new music and musicians to add to our CD collections; perhaps we have learned to play an instrument ourselves. We spend time and money on sampling new and exotic cuisines, even learn to cook them. We pamper our sense of touch with cashmere sweaters, silk pajamas, and crisp linen shirts—we can hardly help refining it through our constant interaction with an infinitely varied tactile world. Yet most of us take our sense of smell for granted, leaving it to its own devices in a monotonous and oversaturated olfactory environment. We never think about its cultivation or enrichment, even though some of life’s most exquisite pleasures consequently elude us.”

“Some say Fougère Royale [first issued in 1881] is to fragrance what Kandinsky’s first abstract gouache of 1910 is to painting: a turning point. Even the tongue-in-cheek name (‘royal fern’) announces that the game has changed: ferns, of course, have no smell and there is nothing royal about them. […] Fougère Royale starts the way some Bruckner symphonies do, with a muted pianissimo of strings, giving an impression of tremendous ease and quiet power. It does smell of coumarin, to be sure, but it is also fresh, clean, austere, almost bitter. […] But wait! There’s a funny thing in there, something not altogether pleasant. It’s touch of natural civet…”

—Luca Turin in Perfumes: The Guide by Luca Turin and Tania Sanchez (Viking, 2008)

Despite all of the marvelous experiences in other cities I had over the past two months, the event that still remains most vivid to me is Green Aria—a Scent Opera, which I caught during my two day return to New York City in between flights. My encounter with that completely unique artistic creation triggered a ton of thoughts at the time which have only gotten more elaborate as time has gone by, and have been even further fueled by the writings of perfume guru Luca Turin. In one of life’s inexplicable yet fortuitous coincidences, in the guest room I stayed in several days later in Toronto there were copies of both of Turin’s books as well as Chandler Burr’s biography of the man. Sneaking fleeting glances at these books during the few hours I was actually in the room hooked me into wanting to learn about olfactory concoctions and to see if my experience of them could in any way be analogous to the way I perceive visual art, literature, film, or any of the performing arts—obviously, most of all, music.

So still immersed in Luca Turin’s The Secret of Scent (which I ordered along with several other nasally-oriented volumes upon my return) and armed with notes culled Perfumes: The Guide (which Turin co-wrote with Tania Sanchez) plus a list of perfume retailers in New York City, I embarked on a completely new (at least for me) experiential adventure—a jaunt through various perfume counters in an effort to figure out how much I could distinguish about the various offerings on hand. 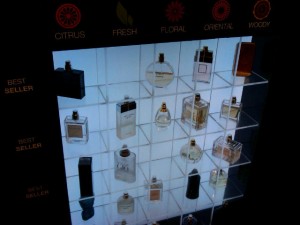 A few of the many scents available for sampling at one of the many NYC branches of Sephora. But it is extremely difficult to process a large amount of olfactory information.

I started my quest at one of the many local branches of Sephora which allows visitors to sample a great many of the perfumes on sale without terribly forceful sales personnel hovering over you to guilt you into buying something. Conveniently placed smelling strips placed near the “tester” bottles allow store visitors to get a sense of what different perfumes smell like in the same way that headphone kiosks allow curious listeners to check out the latest recordings. So far so good. Perfumes in Sephora are divided by male and female fragrances—there’s definitely nothing analogous to that in a record store—and within those divisions arranged by company name. To me it seemed the equivalent of alphabetizing CDs by record label or music publisher. But since perfume composers (they actually use the same word!) are even less known to the general public than the composers that usually get talked about on these pages, it must be conceded that sorting fragrances by their creators would make little sense to potential consumers.

I wound up visiting three different branches of Sephora since the stock is not consistent from store to store, but eventually found my way to the first floor of Macy’s which I suppose is analogous to a Metropolitan Museum of Art or Lincoln Center for perfume. At Macy’s, specific areas are consigned to specific manufacturers whose representatives hawk their wares quite aggressively. I’d argue that the scene there is way more intimidating for a novice potential perfume audience member than attending an exhibition or an orchestra performance would be for a neophyte museum visitor or concertgoer. At the same time, you might be more likely to find a remarkable aroma in Macy’s than at Sephora. Of course, there are even higher end places to seek out the perfect scent such as Bergdorf-Goodman or specialty shops for various manufacturers which I suppose are analogous to blue chip art galleries or historic music shrines like Carnegie Hall, the Village Vanguard, or La Scala.

But after nearly two hours of sniffing, my nose was completely overwhelmed. Admittedly I’m a complete amateur at this sort of thing, but I would contend that is more difficult to stay focused nasally for long periods of time than it is to read for hours on end, look at floors of museum walls, or listen to music for hours uninterruptedly. And there’s a real bodily limitation in addition to the perceptual one. Despite my overhearing someone in the music business claim that being exposed to minimalist music made her physically ill, it seems physically impossible (though probably not psychologically so) to have an allergic reaction to music, whereas I imagine the same is not true for perfumes.