Deborah helped many composers and performers through her work as a consultant and at the American Music Center, Concert Artists Guild, and the American Composers Alliance. But she was much more than an administrator. Her librettos included Under the Double Moon, a collaboration with composer Anthony Davis, and Mary Shelley, which she created in partnership with the composer Allan Jaffe. 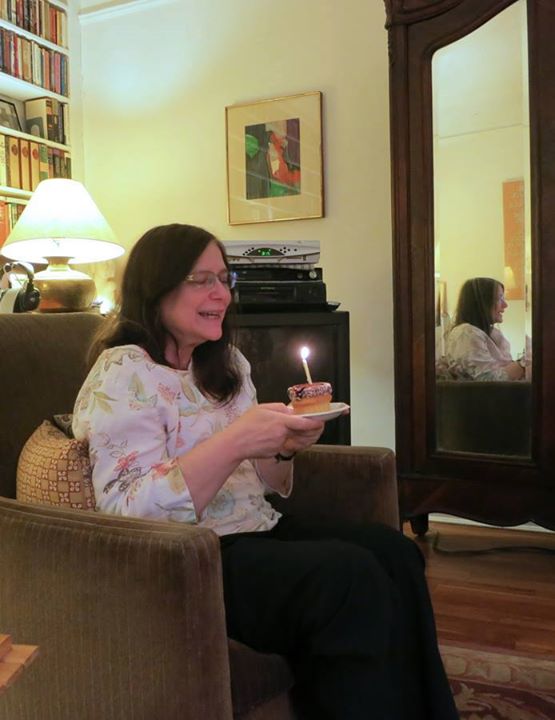 Deborah Atherton. Photo by Claudia Carlson, taken at a meeting of her writing group, River Writers of Manhattan.

D SQUARED. That was the idea for a business name Deborah Atherton and I used to joke about when we considered joining forces to help small arts organizations and artists. (We never did launch that business.) We had decided a long time ago that in the workplace, I would use the name “Debbie” and she would use “Deborah.” In fact, I was shocked to hear her family and other friends refer to her as “Debbie” because we had put that agreement into practice some 24 years ago and never strayed from it. Our shared first name confused many, even as recently as a few months ago when someone thought I was the “Development Director Deborah” who was once married to Anthony Davis. We shared a common name, a common profession, and even common jobs, though in succession. But there was nothing common about Deborah. She was one of the most unique and creative people I have ever known, and as her sister-in-law said today, she was the “queen of grace and kindness.” I think everyone who knew her would agree to that coronation. Her death on December 10 sent many of us reeling with pain and loss.
I’ve been thinking about what I could write that would convey the deep and complex human being Deborah was. She helped many, many composers and performers through her work as a consultant and at the American Music Center, Concert Artists Guild, and the American Composers Alliance. She also mentored younger arts administrators. But she was much more than an administrator. She was an artist. And a mother, sister, aunt, cousin, friend. As my friend, she encouraged me throughout many changes in life. I still remember when I was pregnant and finally got the results of the amniocentesis—including the news that I was carrying a boy—which I shared with her. She burst out, “Debbie, boys are wonderful! They love their mothers!” She didn’t mention the obvious—mothers love their sons—but it was there, all the time. She loved her son Tim with all her heart. She spread love and warmth to so many people. She made friends everywhere she went. There are many people who had fabulous experiences with her and their voices should be heard. So I thought the best tribute to her memory would include some of their stories.

Deborah was an extraordinary writer of science fiction and a librettist. Her librettos included Under the Double Moon, a collaboration with composer Anthony Davis, and Mary Shelley, which she created in partnership with the composer Allan Jaffe. Here’s a memory Allan shared with family and friends of Deborah Atherton on a private Facebook page (which I reprint here with his permission):

When Debbie was in the hospital being treated for Hodgkin’s in the 1980s, her first bout with cancer, I went to visit her. At the time, we had started work on our first project, our musical Carmilla, a female vampire tale. When I saw her she was receiving a blood transfusion to counteract the effects of the chemo. As we were talking and the blood was dripping into her, we got the idea of a song “Blood!” where Carmilla and her cohorts sing about the wonders of that delicious red substance, and then and there we started writing our song, which became part of the piece. Resourcefulness, humor, the ability to make lemonade when we are dealt lemons, and a general positive outlook, all these qualities were part of Debbie, and have always been an inspiration for me. During this last bout with cancer Debbie mentioned a piece that she had in mind using the sounds of the hospital; she was convinced that there was a composition in that.
As a writing partner, Debbie had a vision which was so deep and often different. Sometimes she left me in the dust, and I had to scramble to keep up. Mary Shelley was like that. At first, I didn’t quite get it; an opera about the creator of Frankenstein where the monster was a symbol of this woman writer’s struggle with expression and acceptance of creativity, and the conflict it posed with the people in her life. The more she wrote, the more I set her words, the more I entered into her world and saw the depth and meaning. And over the ten years we worked on the piece, that world got richer and deeper for me, inspiring music that I didn’t know was in me. I am so grateful to Debbie for giving me that opportunity and only regret the fact that we couldn’t finish the piece we were presently working on.

Allan Jaffe and Deborah Atherton: “Mary’s Vision” from The Mary Shelley Opera
Mary Shelley sung by Barbara Rearick; Percy Shelley sung by Scott Murphree; Ulla Suokko, flute; Toyin Spellman, oboe; Richard Mannoia, clarinet; Louis Schwadron, French horn; Monica Ellis, bassoon; Conrad Harris, violin; Carol Cook, viola; Robert Burkhart, cello; Mark Helias, contrabass; Timothy Heavner, piano; Conducted by Alan Johnson. Recorded live in concert at The New York Society for Ethical Culture by David Baker and Katsuhiko Naito on May 16, 2002. Copyright © 2002 by Allan Jaffe and Deborah Atherton (BMI). All rights reserved. International copyright secured. Streamed with permission.
Deborah was also deeply interested in understanding creativity, and not just her own. She wrote about the creative process of others. She was on the board of the Interstitial Arts Foundation, an organization that was formed in 2003. She also actively engaged with other writers through a chat room that was formed some 20 years ago, as recalled by her friend Janice Ferri Esser:

There are a group of us online who call ourselves The Sistahs. We hail from all corners of the writing realm: film, television, theater, novels and stories, journalism, poetry, nonfiction, and teaching. We are still together, posting amongst ourselves, twenty years after meeting in the AOL Writers Club Chat Room. We chat about our work, our lives, our families, our joys and successes, our sorrows and misfortunes. We bitch, we laugh, we bemoan the current state of world affairs and offer up solutions. Oftentimes, we’d all be weighing in on this, that, or the other thing, the comments would be flying, but… no Deb. Then a day or so later, she would weigh in, as someone else noted with her characteristic kindness and grace, and always with intelligence and witty good humor. Deb’s comments were always worth the wait. I mentioned this to my husband the other day, and realized what it was that made Deb’s posts so special. She was one of those rare human beings who actually thought before she spoke. She would take in what was being said, think on it, and then frame her response to the conversation at hand in thoughtful, often lyrical terms. She was our Sage. I never heard her speak an ill word about anyone. She did not gossip or trash talk. She did not complain, even when she had a setback. She was humble and sweet and wickedly funny.

Deborah was never at a loss for creative project ideas that reflected her wide range of passions. So, at the time of her death, there was a body of work, most of it collaborative, that remained unfinished. One was an historical mystery novel she was writing for many years with her sister Susan. Another was a new project with Allan Jaffe. And yet another was a book about haunted places, an interest that then merged with her ability to read tarot cards when her former colleague at Concert Artists Guild, Mary Madigan, wanted to learn how to read them as well. Mary recalls:

We’d meet for a drink and dinner, and tarot readings. Deborah suggested meeting at places in old buildings, places she thought had an energetic influence or ghosts. We went to someplace at the Chelsea Market, and to The Algonquin, and then to Landmark Tavern. Apparently there’s a ghost at Landmark from the days of prohibition, and Deborah thought she’d do some research on that. (We did chat up the manager. He told us what he knew: something about a murder upstairs in a bathtub I think.) The first time we met there we discovered Irish music sessions in the back room on Monday nights. That became our routine—to meet at Landmark on a Monday night, sit in the back room, order fish and chips with a glass of wine, catch up on life, listen to Irish music, and do tarot readings.

When Deborah discovered last summer that she had a new medical challenge that would require intensive treatment and long hospital stays, she didn’t hesitate to reach out to family and friends. She let us know what was happening, and told us she would need visits from us. She connected us through a private Facebook page. How did she know that we would find comfort from each other on that page? That even in her death, she would broker new relationships and deeper understanding? I keep asking myself this question: How can I say goodbye to someone who, in spite of the obstacles she encountered throughout a good part of her adult life, wrought meaning and purpose out of every day, even days spent in hospital rooms? I really can’t say goodbye, not yet. So I’ll end this remembrance with a poem written by her friend Claudia Carlson on Wednesday December 3, when her condition worsened:
A Civil Departure
Dear Debbie, how can you be dying
on a night of civil unrest, helicopters and sirens…
You who spoke softly or not at all
a social smile for a reserved heart
observations saved for later, sharpened by wit.
I thought you deserved some sweeter notes
than shouts and municipal budgets gone to riot squads…
Fill the air with arias and songs you were writing.
How can you leave now with your novel half finished—
what will Captain Leonie do without you
to guide “The Water Lizard” to new plot points?
With my heart half emptied
the streets are empty now too
the protesters gone to bed…
Life is so short and yet I found you
let that be the better sorrow
I found you and loved you
and you had to leave too soon.
No wonder the sky rings with grief. 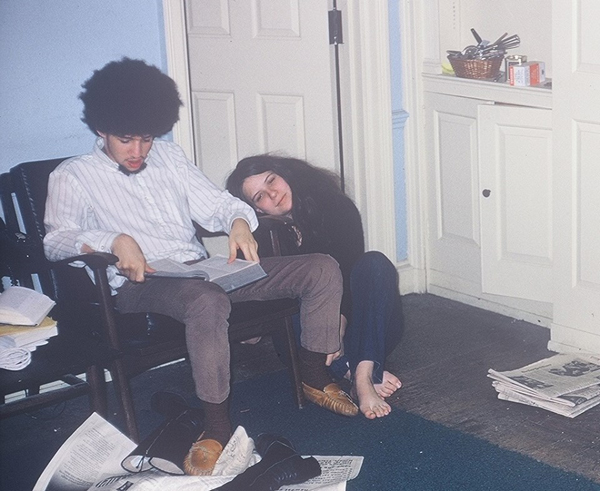 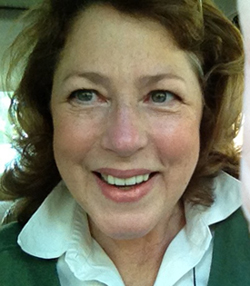 Debbie Steinglass is the Director of Development for New Music USA and a pianist. She is the former Executive Director of The Jazz Gallery, has counseled and coached many composers and small arts organizations, was a music teacher for many years, and started her career as an arts administrator 28 years ago as the Director of American Music Week at the American Music Center. Her husband and son, both fellow music enthusiasts and creators, are the center of her life.