The Price of Admission
NewMusicBox
Written By

The Price of Admission

Two performances I attended over the weekend were particularly noteworthy in that they were both devoted exclusively to the music of living American composers and—in both instances—all of the composers were there and spoke to the audience.

A week ago I wrote about it feeling like autumn because I had just started going to concerts again after a mostly eventless (pun intended) summer. Since then it’s been a non-stop rollercoaster ride of concerts, music-related receptions, and other meet and greets. The 2012-13 concert season is now officially underway. Two performances I attended over the weekend were particularly noteworthy in that they were both devoted exclusively to the music of living American composers and—in both instances—all of the composers were there and spoke to the audience.

On Friday night, I finally got a chance to hear the JACK Quartet play live on American soil. (I’ve treasured their Xenakis recording on Mode since its 2009 release and you might recall my fascination with their performances at the 2010 Donaueschinger Musiktage.) The JACK Quartet served as the ensemble for the Second Finale National Composition Contest Reading Session, co-hosted by Make Music, the producers of Finale music notation software, and the American Composers Forum (ACF). Last December in Chicago, eighth blackbird served as the ensemble for the first of these contest reading sessions, performing the works of three finalist composers—Andy Akiho, Eric Lindsay, and Kurt Rohde—who were chosen from an applicant pool of more than 500 submissions. As in the previous contest, JACK chose three composers who each received a cash prize and were asked to write a new work for the quartet to workshop and perform in public before choosing one of the three to tour throughout the season. 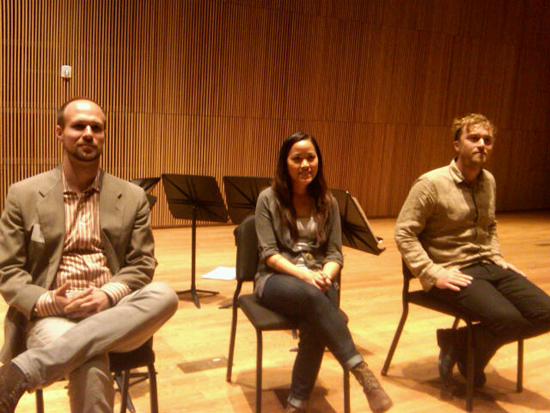 Each of this year’s finalists seemed fixated on a specific aspect of what is possible with a string quartet. Taylor Brook explored extended just intonation, which an ensemble of fretless strings are capable of conveying more easily than most other instruments. Nathan Shields took full advantage of the homogeneity of the string quartet, reveling in the extraordinary ensemble balance this performing unit can convey. When individual instrumental parts offered different textures the potentially jarring simultaneities still somehow blended. Michelle Lou mined a variety of unusual extended techniques; even though I was sitting in the front row I couldn’t figure out how the players made some of the sounds required of them in her score. Early into the performance, JACK’s cellist Kevin McFarland (the K in JACK) popped a string. Considering the prickly sound world of Michelle Lou’s piece, aptly titled Porcupine, at first I thought it was intentional—it actually sounded pretty great—but, alas it was not and McFarland had to exit the stage to replace the string and spent quite a bit of time retuning once he came back. He apologized for doing so comparing tuning in public to flossing in public. Despite the setback, Porcupine, which was then played again from the very beginning, ultimately was the winning piece in the competition although JACK stated that they intend to keep all three pieces in their repertoire.

It was nothing less than Herculean to pull off these three rather difficult compositions in what sounded like extremely polished interpretations despite the event held in the DiMenna Center’s Mary Flagler Cary Hall being dubbed a reading session. So it was extremely fitting that, as a special token of appreciation, ACF’s President and CEO John Nuechterlein presented JACK with a specially designed box of Wheaties cereal (“the breakfast of champions”) featuring the faces of the four quartet members. Like the ACF, General Foods, the manufacturer of Wheaties, is based in Minnesota, something I did not know before this concert. 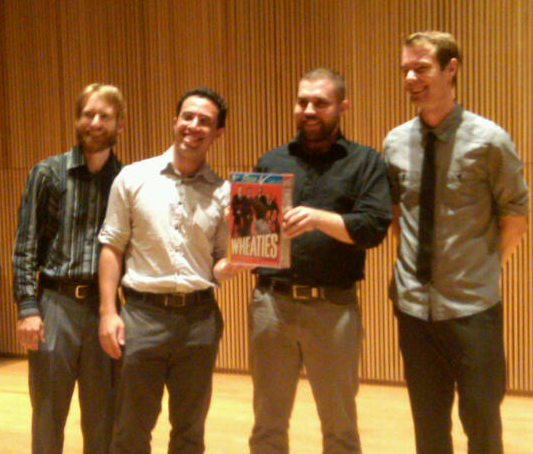 The JACK Quartet earned their Wheaties.

The following night I attended the final concert of the 2012 New York Chamber Music Festival at Symphony Space. While the festival was not devoted exclusively to new music, I was saddened to have missed the opening of this year’s series which was a marathon concert for the John Cage centenary and the finale was a celebration of contemporary American art song performed by soprano Carole Farley. Farley’s concert featured songs by four composers—Paul Moravec, Ned Rorem, David Leisner, and William Bolcom. Originally the plan was for each of the four to accompany Farley in the performances of their music, but Rorem, who will turn 89 next month, ultimately decided not to play and so Judith Olsen accompanied Farley instead. While I missed hearing him play, at this point in his life I can totally understand his reluctance to attempt a potential minefield like his Theodore Roethke setting “I Strolled Across an Open Field,” something I’d be terrified to perform even for friends, although as recently as a decade ago when he recorded that song with Farley he made its relentless figurations sound like child’s play. Rorem still attended the performance and it was great to see him and hear him talk about his music in his usual oblique way: “A composer can’t say anything about his music that the music can’t say better itself.”

Although Moravec originally composed the song cycle Vita Brevis for tenor and piano in 2001, he re-arranged it for voice and piano trio in 2009 and that is how it was presented on Saturday night by Farley with Moravec behind the piano, joined by NYCMF’s President and CEO Elmira Darvarova on violin and Samuel Magill on cello. It’s a surprisingly uncommon combination—the only other work so scored that’s immediately coming to my mind is Rorem’s Auden Songs from 1989—but as Moravec pointed out in his comments to the audience it’s nice to be able to match long vocal notes with instruments that can sustain. Bolcom’s songs, like much of his music overall, were a mix of ravishingly prettiness (“Never More Will the Wind”) and over-the-top shenanigans (“The Digital Wonder Watch”). But the highlight of the evening for me was hearing the songs of David Leisner for which the composer served as accompanist on classical guitar, since he is one of today’s leading practitioners on the instrument. But his vocal writing is every bit as idiomatic as his guitar writing. I was particularly drawn to the last of his three settings of the poetry of James Tate in which the vocal melody is clothed in a series of ascending phrases whose meters keep shifting. And I was shocked to learn that his fascinating cycle of Emily Dickinson settings, Simple Songs, though composed thirty years ago have yet to be recorded commercially. 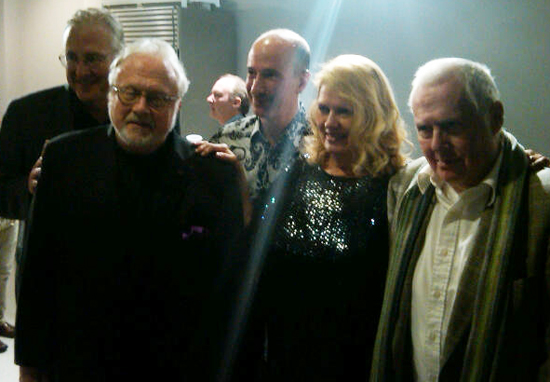 Despite all this immersion in music, I managed to get over to the Whitney Museum before Saturday night’s concert ostensibly to catch the Yayoi Kusama retrospective before it closes on September 30 and I’m extremely glad that I did. I’ve long been drawn to pieces of hers that I’ve seen in various galleries and museum collections over the years, and treasure the monograph of reproductions of her paintings, sculptures, and other kinds of objets d’art that sits on my bookshelf, but these encounters pale in comparison to being in a room completely surrounded by her work. While Kusama attained notoriety for her obsessive cascades of polka-dots and for staging controversial happenings in the 1960s involving public displays of nudity, the Whitney retrospective revealed a broader range of work spanning more than half a century, and included a ravishing series of acrylics completed just a couple of years ago which somehow all seamlessly connected. The rest of what was on display at the Whitney was equally compelling. A selection from the permanent collection focusing on works predominantly from the 1940s and 1950s that explore pictographic symbolism including some from unlikely artists such as Pollock and Rothko is a much appreciated antidote to the received wisdom of art history. As a music focused person I was very intrigued by the recreation of the Raumlichtkunst, a multi-screen experimental film by Oskar Fischinger that was described as “music for the eyes” when it was first shown in Weimar Germany in 1926. While I was somewhat perplexed by the Whitney screening’s historically inaccurate soundtrack, which featured Double Music by John Cage and Lou Harrison and Edgard Varèse’s Ionisation (both of which postdate the film), it was a welcome surprise to encounter this music in the middle of the afternoon in an art museum.

Perhaps the only somewhat unwelcome encounter of the whole day occurred upon entering the Whitney. As my wife and I waited in line to get tickets, two people exiting offered us their tickets so we could get in for free. At first we simply ignored them and as a result they perhaps thought we did not understand them so they made the offer again more assertively at which point I said, “Thanks, but we’d like to support the museum.” Somewhat shocked by this, they eventually said, “That’s very nice of you” and then left without passing on the tickets to anyone else as far as I can tell. While it was by no means a malicious act on their part to offer us the tickets and I was slightly concerned that I might have overreacted to it all, it did hit home for me a phenomenon that threatens to be an epidemic with arts experiences. While anyone would be perceived as a criminal if they offered to let you into the New York City subway system for free, someone offering to do the same at a museum might be perceived as a good Samaritan as is the case most of the time when people share music without remunerating the people who made it. And yet, without the ability to recoup some of the funds that are necessary to produce and present art work of any kind (though admittedly it is not possible to do so exclusively from ticket sales in any art form), the production and presentation of art work on a grand scale would not be possible in a society that does not do more to publicly fund the arts.