The Opportunity of Electroacoustic Musicology

The musicological exploration of electroacoustic music, its historical and social dimensions, is long overdue. In fact, as so many pivotal figures pass away, I cannot fathom why there has not been a rush to collect primary source material, let alone to interpret it.

I want to start this post with a challenge to my musicologist colleagues (I hope there are musicologists reading NewMusicBox), but it is really a call to action for us all. The exploration of electroacoustic music, its historical and social dimensions, is long overdue. In fact, as so many pivotal figures pass away, I cannot fathom why there has not been a rush to collect primary source material, let alone to interpret it. The lack of this activity spurred the creation of the Video Archive of Electroacoustic Music and gave the collecting of oral histories urgency when my wife and I started in the 1990s. Much as we both care about this work, we are no longer able to collect these oral histories, yet this work is increasingly important today. It was alarming to us at that time that no one had captured the stories of electroacoustic music’s pioneering composers and engineers.  Though aware of the great work being done by Vivian Perlis at Yale, we knew that no one had yet filmed the stories of figures such as Bebe Barron (composer of experimental electronic film scores and collaborator with John Cage, Earle Brown and others) who was very ill. Neither was there much about the founders of any of the first studios in the USA, including the Columbia-Princeton Electronic Music Center, San Francisco Tape Music Center, University of Illinois studio, and Bell Laboratories. We rushed to capture what we could, given scant resources and the many other demands on our time. We were certain then that whole careers could be made mining these materials if only someone could preserve the stories. And today there remain untapped opportunities to do critical archival work, to interpret the stories, and to study the music itself. 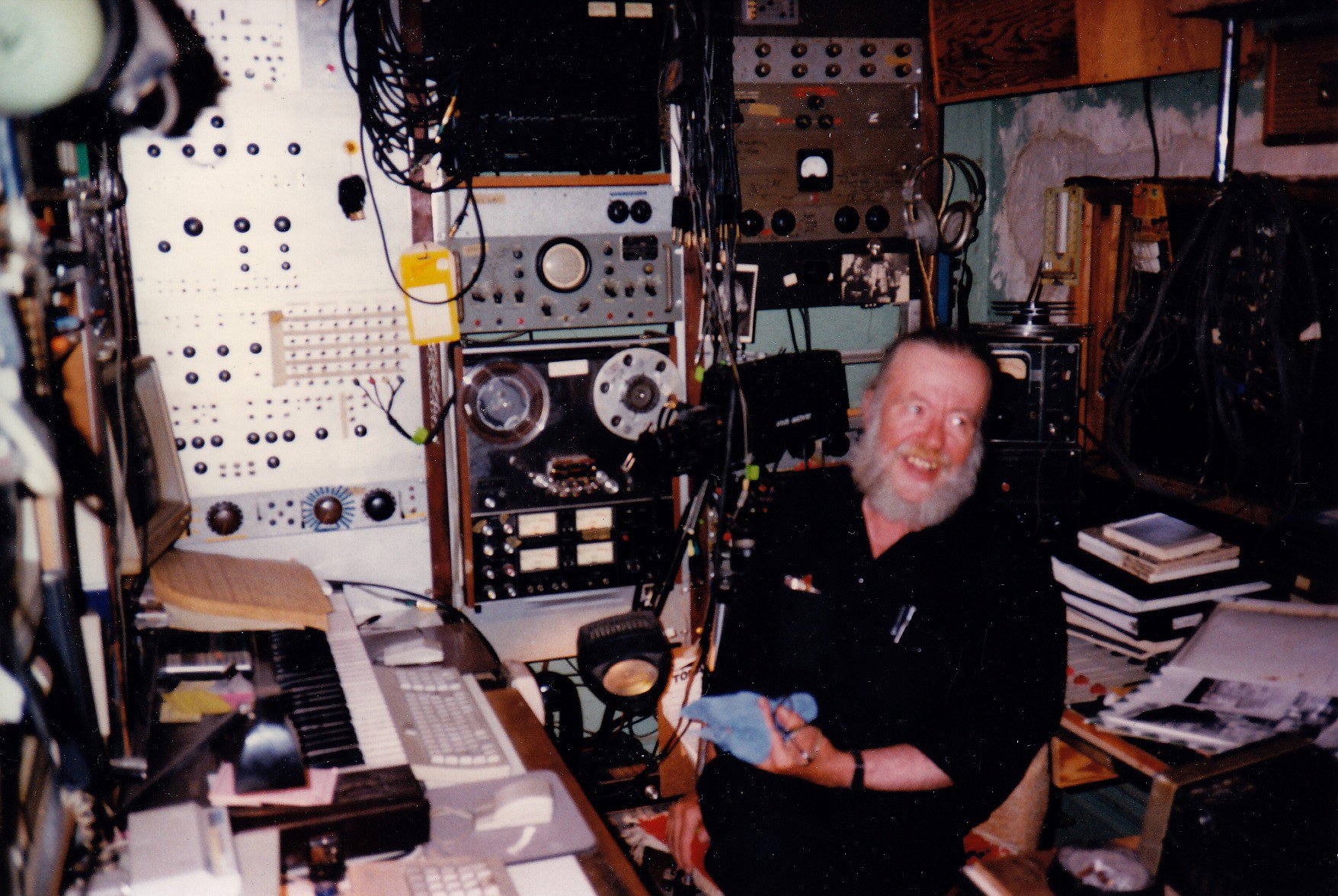 Bill McGinnis, the first engineer of the San Francisco Tape Music Center (before Don Buchla came in). Photo taken in 1998 when we interviewed him in his home studio in San Francisco.

Twenty years since we began our collecting, electroacoustic music is still essentially unclaimed territory—especially outside of its popular music dimension. It seems ironic that, in a time when we fetishize even the most mundane activities and record them with our phones, there is still such little effort made to capture and interpret this pivotal transformation of music.  There have been a few modest bright spots, including the conference on the late electroacoustic works of Luigi Nono at Tufts that I was pleased to participate in this past March. Alas, this seems to be the exception, which leads me to revive my speculations on some of the forces that have delayed the development of a subspecialty in electroacoustic musicology. I write this with the hope that things may be poised for a change and that some of you will take up the challenge.

Composers and musicologists still do not communicate with each other very much or very well.

Why then has this work been slow to start, and what might change the situation? For one thing, composers and musicologists still do not communicate with each other very much or very well. This is true even at my own educational institution, where relations between programs are excellent and we actually all like one another.  I contend that there is still too much of a separation, often due to historical animosity and unfortunate, longstanding battles over turf.  These are destructive and if we do not put them to rest and start doing more to think as one profession, we will continue to fade into irrelevancy. I do not object to the study of popular music, but I do not subscribe to an idea, gaining in currency, that turning to the study of popular genres is the path to relevancy in music education. Instead, I propose that a more robust conversation about musical ideas and the creation of new work, the kind of conversation found in all of the other arts, is essential. Such a profession-wide conversation is currently lacking. I mention this larger issue here because there are lots of dimensions to electroacoustic music that make it fertile ground for engendering a lively and productive scholarly argument of the kind we desperately need.

Another factor to consider is the technology of electroacoustic music, which presents both opportunity and obstacle.  On one hand, the novelty inherent in the constant flow of new music hardware and software products is attractive to a broad segment of the technology-worshiping public.  The energy of invention around this marketplace is alluring, lending a pseudo-scientific legitimacy that other music does not enjoy. Old technology—say, a violin—becomes invisible to us, but this means that instead of being diverted by the instrument itself, we are more likely to engage with the music. The violin is very little changed over its several hundred years and has ceased to be a novelty, so we are able to ask instead: what new musical ideas can this instrument express? In fact, fewer people than ever study the music itself, which is part of a larger problem, but this also explains something about why we are stuck in the starting gate with electroacoustic music.

My relationship to cars is a pretty good analogy to how I’ve worked with synthesizers: They look shiny, sexy, and inviting at first, but once I drive one a little, it becomes just a way to get from point A to point B—at least until something goes wrong.

The obsession with the devices of electroacoustic music is as much a problem for composers as it is for scholars. Music by definition is highly abstract, and thinking in music is hard, even more so when there are frequently no scores to consult.  It is much easier to become immersed in the features of some new “toy.” The non-abstract, concrete aspects of music hardware and software make these much easier to relate to than music itself.

I confess that the allure of the first synthesizers in the 1960s was one of the things that drew me into composing electroacoustic music. At the time I was in high school, I had been composing for a couple of years and quite accidentally was lent an ARP Odyssey synthesizer. I had heard Mort Subotnick’s Silver Apples of the Moon and was frustrated not to be able to get similar results from this keyboard-reliant minisynth.  Over the subsequent years, as I was introduced to many other analog synthesizers from Moog, Buchla (the one used by Subotnick), Serg, EML, and others, and each time found I was working against rather than with the differing architectures. I really wanted the machine to become almost invisible and to allow me to make the music I was hearing. My relationship to cars is a pretty good analogy:  they look shiny, sexy, and inviting at first, but once I drive one a little, it becomes just a way to get from point A to point B—at least until something goes wrong.

Still, as a steward of one of the remaining Buchla 100 systems, I have an acute awareness that the history of the technology is also in need of attention. There are many stories that need to be told through this lens: How is it that the Buchla and the Moog are fundamentally similar, yet so different? What are the relationships among the musical approaches composers take and the idiosyncrasies of particular technology? I am ultimately, however, much more interested in the music that this technology allows us to create, and I imagine that at least some musicologist colleagues would be, too. But if there is little work being done on the history of the instruments, there is even less addressing the music itself. For perspective, consider again how a historical change in our relationship to the instruments is part of this mix. It would seem odd to point out that there is a much larger body of work on the piano music of Mozart than on the evolution of the piano, yet in electroacoustic music, this balance is reversed. All of the energy in the room is constantly sucked up by the vast and ever-expanding array of new products, and so little is left to consider what is being achieved musically with these tools. I think we all recognize this phenomenon, but that recognition has not changed anything much in the forty years I have been in the field. 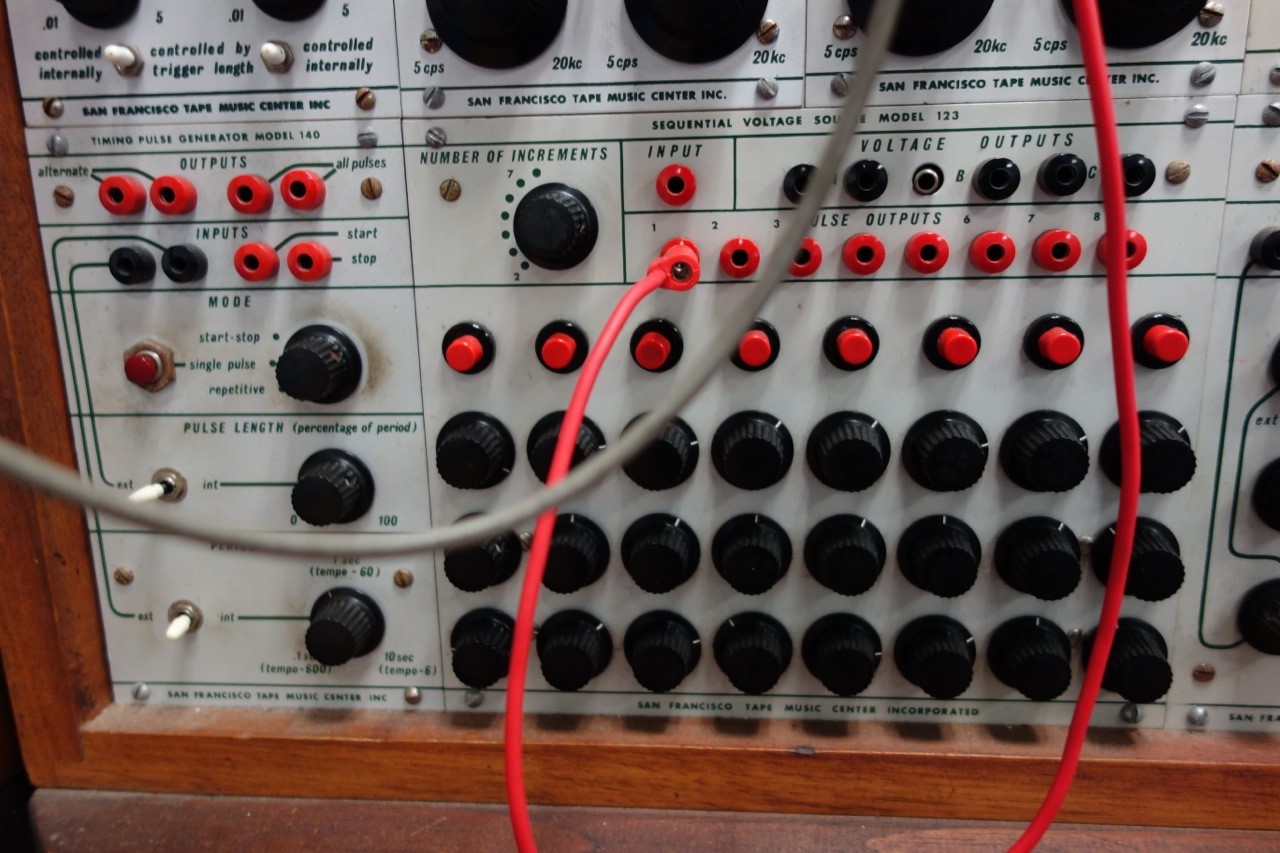 Electroacoustic musicology, far from being a narrow subspecialty, could develop as a broad range of investigative possibilities, many organically interdisciplinary in nature.  The relationship to the history of science and technology is perhaps the most obvious, but there are many other linkages.  And as much as I argue here for this work as a branch of so-called “art music,” the connections to the world of popular music represent the richest pathway between the academy and the larger public.  Having collected the oral histories, I often feel too that one especially ripe approach would be ethnographic.

It would seem odd to point out that there is a much larger body of work on the piano music of Mozart than on the evolution of the piano, yet in electroacoustic music, this balance is reversed.

As I mentioned in my previous post, electroacoustic music inhabits a network of communities, some organized around institutions and others around compositional approaches or particular technologies.  If one adds the recognition that there is a large body of music without notated scores, the similarity to the world of the ethnomusicologist is inescapable.  Ethnographic work though is only one possibility of many.  The field is wide open and accessible on multiple levels to any ambitious and pro-active scholar who is willing to eschew the conservative canon in favor of a somewhat more recent and— arguably—field-changing history.