The Need for Speed
NewMusicBox
Written By

The Need for Speed

Both composers who are prolific and those who are not have reasons for working at their own paces, and it seems that both options (not to mention those in between) can be valid. There has been life-altering music written at the speed of light, and also in the thickest molasses of slowness. 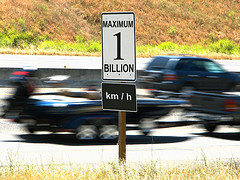 The obsession that composers have with being prolific has always been an interesting and somewhat contentious issue for me. There is so much worth placed on how fast and how much a composer can produce in a given time period, as if to assume that a catalog bursting with a large number of pieces means that the composer is better, smarter, more dedicated, and more creative than her or his peers with shorter lists of works. Both composers who are prolific and those who are not have reasons for working at their own paces, and it seems that both options (not to mention those in between) can be valid. There has been life-altering music written at the speed of light, and also in the thickest molasses of slowness.

It’s probably safe to say that most of us feel a twinge of envy at the thought of J. S. Bach whipping out a cantata every week for two years running, or of Mozart writing 23 pieces—including two operas—in the year of his death, not to mention the lengthy, large ensemble-heavy catalogs of living composers such as John Adams, Jennifer Higdon, or Christopher Rouse. Requiring beginning composition students to write many short pieces very quickly as outlined by Rob Deemer and the several-day composing marathon for Tanglewood composition students described by John Harbison are both intended to push and shake composers into new creative spaces (a good thing), and to learn more about themselves and their relationship to their music (also a good thing). Although I have reservations about subjecting beginning students to this sort of activity, I can see how it could be beneficial is small doses. There are situations in which more really can be more, but not everyone thrives under such conditions, and they—the slower moving Varèses, Weberns and Crumbs of our time (be they male or female)—should not be put at a disadvantage by that fact. There are myriad ways to discover new creative processes—racing against deadlines is only one.

At the core, I think there are two issues at hand. First, all of the very productive composers mentioned above are anomalies. And let’s face it, who doesn’t want to be this kind of anomaly? The passionate, obsessed, insanely prolific composer has been romanticized since forever and, somewhere in there, imagination started to morph into expectation. In my mind this is more a statement on cultural assumptions about “the need for speed” than about creativity and art-making. While for some it may be helpful to attempt to emulate such models, viewing levels of production as a measure of anything beyond “units built” seems misguided.

The second issue, which is connected to the first, is that we all want composing to be easy, and writing quickly makes the process appear effortless. But the thing is, composing just isn’t easy. Not all the time, anyway. Somehow I doubt that Bach breezed through those cantatas every week without a drop of sweat or a hair out of place. While I do think that pushing one’s self to compose faster can help make the process go more smoothly, it is ultimately up to the individual to determine what suits his or her creative mojo. I know several composers who cranked out piece after piece in rapid succession when they were younger, who now go much slower and take more time to think about their compositional choices. Both methods worked for them at different times in their lives.

My hope is that all the composers out there will simply write the very best music possible, with enthusiasm and full attention, regardless of how fast or how slowly it happens.