There’s an old quip that if you’re a composer, the first five years after you die are the worst. Whether or not that’s true, a composer’s posthumous reputation does sometimes veer off surprisingly from its earlier course. In some cases, a giant is laid low; in others, interest skyrockets. Paul Hindemith was routinely spoken of in the company of Schoenberg and Stravinsky during his lifetime but has not fared well of late, while a quarter century after his death John Cage is more influential than ever. Yet the hierarchies of departed composers are fluid. In the 1920s, Harvard students joked that the exit signs at the Boston Symphony meant “this way in case of Brahms.” J. S. Bach, Schubert, Sibelius, and Mahler all have had their ups and downs, and as often as not one generation’s lion is another’s goat (and vice versa).

If you’re a composer, the first five years after you die are the worst.

Now that the fifth anniversary of Elliott Carter’s passing is upon us (he died on Nov 5, 2012), there’s been no push to rename the exit signs at Symphony Hall, but neither has there been universal canonization. The case of Elliott Carter stands apart from the usual pattern of posthumous appraisals, not least because Carter lived to within a few weeks of his 104th birthday, and kept composing almost to the end. He may be the only composer in the history of Western music to have done so. Rather than leaving us just a handful of unusual works that slot neatly into the dotage thought inevitable before the Romantics or the transcendence Adorno heard in late Beethoven, Carter wrote dozens of pieces in a wide variety of genres. If Aaron Copland’s experience of composing (or rather not composing) in old age was like the turning off of a faucet, Elliott Carter’s was like whitewater rafting. He rode an extraordinary wave of productivity in his last decades, far exceeding that of his youth and middle age. If we measure in minutes of music, the midpoint of his catalog comes out to be after his 80th birthday, and the compositions for which he is best known (the first three string quartets, the Double Concerto, Piano Concerto, and Concerto for Orchestra, even the vocal works of the 1970s) are closer to his early forays into Neoclassicism than to the “mature” work of his 90s and 100s. Carter’s unprecedented combination of longevity and productivity, together with the unflagging quality and variety of the music he produced, upends the standard narrative of a composer’s career—juvenilia; mature work; final decline or apotheosis—and leaves us with a bounty of “late music” that stretches over more than three decades.

Some of this music will be familiar to NewMusicBox readers. Most of Carter’s compositions of the 1980s, including Night Fantasies (1980) for piano, Triple Duo (1983) for the now-standard “Pierrot-plus-percussion” ensemble, and smaller pieces like the 4 Lauds (1984-1999) for solo violin and Esprit Rude/Esprit Doux (1984), for flute and clarinet, have become familiar presences on recordings and in the concert hall. Carter’s two “capstone” projects of the 1990s—the 40-minute orchestral triptych Symphonia—Sum Fluxae Pretium Spei (1993-96), and his one-act comic opera with Paul Griffiths What Next? (1997-98)—have had numerous performances, and excellent recordings of both are available. And a range of later works, from the perpetuum mobile Caténaires (2006) for piano, to the wind quintet Nine by Five (2009), have established themselves quickly and securely in the repertoire. But five years on, a good deal of the music of Carter’s last half-decade is still not widely known. “Fine print” editions of several scores are still in preparation, and almost a dozen late compositions await commercial recordings and widespread performance. 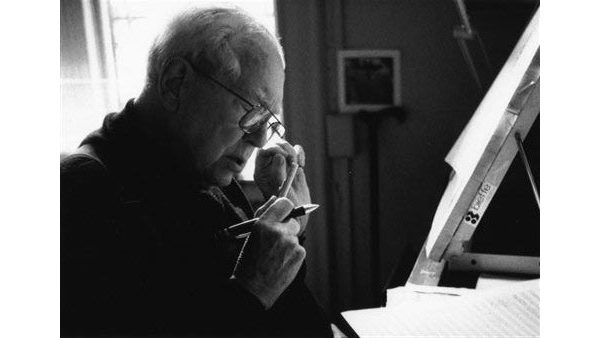 Help has recently arrived in the form of a new release from Ondine with premiere recordings of five pieces Carter composed between 2005 and 2012. (Full disclosure: I wrote the liner notes.) The performers include Carter stalwarts such as Oliver Knussen (one of the best Carter conductors out there), pianist Pierre-Laurent Aimard, and percussionist Colin Currie, but also more recent converts. To listen to Aimard play Carter’s last composition Epigrams with violinist Isabelle Faust (recent Gramophone “Recording of the Year” winner for her set of Mozart Violin Concertos) and cellist Jean Guihen Queyras (whose Bach suites win high praise) is to hear new music rendered as vividly as the masterpieces of the 18th or 19th centuries. No less persuasive are the accounts of five concertante works from the “aughts” and beyond: Dialogues (2003); Soundings (2005); Interventions (2007); Dialogues II (2010); and Two Controversies and a Conversation (2011). Soloist plus ensemble was an ideal medium for Carter. Its musical reflection of the individual in society aligns perfectly with his idea of counterpoint as human interaction. The newer works join an illustrious group of solo concertos for oboe, violin, clarinet, cello, piano, horn, flute, and bass clarinet. But they also introduce new relationships and modes of interaction between soloist and ensemble—from the piano’s Greek chorus-like framing of the orchestra in Soundings, to the studied indifference that the piano and orchestra pretend to have for each other in Interventions.

Such quasi-literary conceits will be familiar to long-time Carter listeners. They are the product both of Carter’s background in the liberal arts—which always counterbalanced his French conservatory training—and his engagement with contemporary poetry, which had roots going back to the 1940s but really took flight 30 years later. Carter’s 1975 cycle of six poems of Elizabeth Bishop, A Mirror on Which to Dwell, has become one of his most widely known pieces (thanks in no small part to the advocacy of Pierre Boulez), and Tempo e tempi (1998-99), on Italian poetry by Montale, Ungaretti, and Quasimodo is another favorite. In Carter’s last years he made song composition a special priority. From 2006 to 2011 he composed at least one major vocal work every year, applying the techniques he had developed in the 1970s to a kind of survey of the great modernist poetry he most admired in his youth. He set Stevens, Baudelaire, Pound, Zukofsky, Moore, Cummings, Eliot, and finally Stevens again, creating vivid yet deeply nuanced settings that animate and enrich the vastly different styles and voices at work in the poems. More than any other genre, Carter’s late vocal music is underrepresented on recordings and concerts. Although all of his late compositions have now been premiered, the rights of first recording for several late song cycles have not yet been exercised, although plans are underway. We won’t have to wait too long for these marvelous cycles to become widely available, and when they do they will no doubt find performers ready to take on their interpretive challenges and share their delights.

American composers rarely come to prominence via their orchestral music.

It is no accident that American composers rarely come to prominence via their orchestral music, and Elliott Carter was no exception. When reminded in 1994 that most of the music he composed between 1948 and 1992 is for small forces, Carter responded not by explaining his fascination with chamber music but by describing the limitations on rehearsal time imposed by American orchestras. It was only in his later years, when conductors like Boulez and Knussen, as well as Daniel Barenboim, Michael Gielen, James Levine, and David Robertson began to program his works regularly that Carter felt he had enough support to devote sustained attention to writing for orchestra. Although he is perennially labeled “uncompromising,” Carter’s hard-won experience with his Piano Concerto (1965) and Concerto for Orchestra (1969) led him to tailor his late orchestral music astutely to the needs of contemporary American orchestras. Gone are the unconventional seating plans, complexities of rhythmic notation, and thickly layered counterpoints of his orchestral music of the 1960s and ‘70s—techniques aimed at overthrowing what he once called “the orchestral brontosaurus.” Instead, Carter wrote to the orchestra’s strengths, in mischievous reimaginings of the orchestral tone poem, as he inherited it from Liszt, Berlioz, and Richard Strauss. The largest work on the new Ondine recording is Interventions—in an electrifying performance by Aimard and the BBC Symphony Orchestra, with Knussen conducting—and it is a sensual pleasure as well as a thrilling ride. Carter never wavered in his belief in the power of music to enlighten the complexities of human experience, but his music makes thought a joy. That his late works show off the virtuosity of contemporary orchestras to such good effect, and make such a vivid impression on audiences, should encourage their appearance on concert programs and recordings well into the future.

Likewise, the future of Carter’s chamber music seems assured. Pieces like the Cello Sonata, which once were beyond the reach of all but the most virtuosic performers, are now standard rep, appearing routinely on programs by professionals and students alike. Longtime Carter champions the Juilliard String Quartet chose Carter’s String Quartet No. 1 to take on their first tour with a new generation of members, and a wide range of quartets, including the Arditti, Brentano, Chiara, JACK, Mivos, and Pacifica quartets all have embraced Carter as well. Soloists and small groups looking for shorter works also have plenty to choose from. Surveying his 60-year career, Carter in his last years wrote dozens of “thank you” pieces, many uncommissioned, for the musicians and patrons who were his friends and colleagues. Many are short and quirky, making the category of the instrumental miniature—which Carter mostly avoided earlier in his career—something of a late specialty. In addition to two brief Fragments (both for string quartet), there are a host of short solos, duos, and trios, among them six solo Figments (two for cello; one each for double bass, viola, marimba, and oboe), and five Retracings (one each for bassoon, horn, trumpet, tuba, trombone)—each of which extracts an ensemble part from a larger piece as an instrumental solo. The modest dimensions of these pieces contain a wealth of invention and a streak of whimsical humor; like their longer siblings, they reward virtuosity and celebrate individuality.

Looking over all this music, it would seem both premature and false to come to any conclusions about which of Carter’s pieces will continue to resonate with the next generation of musicians and music lovers, and which ones will be cast by the wayside. What sets Carter’s music apart is its consistent focus on human experience—what it’s like to breathe in and out, be in love, lose a friend, succumb to vanity, feign indifference, become enraged or bewildered or overwhelmed, hesitate to come forward, or face death—and more often than not to contend with several of these experiences at once. Like every composer before him, Elliott Carter’s popularity has waxed and waned, and one doesn’t need to be clairvoyant to predict that it will continue to do so going forward. But I expect there will always be listeners who will recognize and respond to the fundamental humanity of Carter’s music, and ensure its future as they take it to heart.

Throughout November 2017, NewMusicBox is marking the fifth anniversary of Elliott Carter‘s death with a series of posts exploring his life and legacy. This content is made possible with the generous support of the Amphion Foundation‘s Carter Special Projects Fund.