The Kids Are Alright: The Texas Young Composers Concert
NewMusicBox
Written By

The Kids Are Alright: The Texas Young Composers Concert

Videos preceded each piece on the Austin Symphony Orchestra’s second annual Texas Young Composers Concert program. They provided not only information about the background of the composer and the generation of the work, but also insight into the maturity and character of each artist.

When I was in high school, most of my free time was spent figuring out Van Halen licks, not writing orchestral music. I played classical guitar a bit and spent two years in juvenile detention at Tickle The Ivories Penitentiary, so I had some familiarity with the little black dots. However, for any number of reasons, the idea of composing never occurred to me. Who was I to put those things in order? This is apparently a question that never came to mind for the nine students who were chosen from across Texas to have their works performed at the Austin Symphony Orchestra’s second annual Texas Young Composers Concert. Still, even the night’s first composer Jack Roberts understood that this set him apart. “Writing music is just not a normal thing for a kid to do,” he acknowledged. 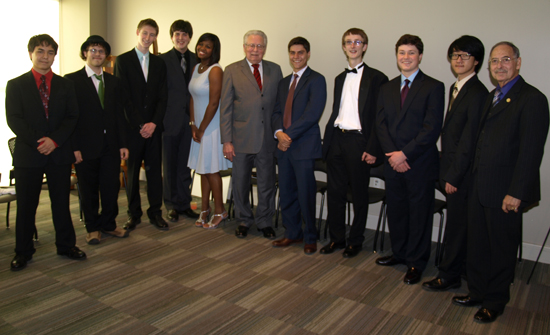 Roberts’s Into the West was the opening work of the evening and was introduced by the composer via a short video projected above the orchestra. Similar videos preceded each piece and provided not only information about the background of the composer and the generation of the work, but also insight into the maturity and character of each artist. I’ve often said that I’m a very lucky guy to have not grown up in the YouTube age[1], but I can’t help but wonder if a sense of constant observation might speak to the high level of maturity and eloquence on display in these presentations. Bursting in all its pentatonic glory, Into the West put on display a number of tropes from the best of the old Westerns. Bright leaping horns held the door open for sad strings, all of it culminating in a triumphant ending.

Austin’s Jocelyn Chambers told a story of staring at a blank Sibelius screen, warmed over John Williams themes created and erased, while her grandfather played piano in another room. From among the lines coming from the piano, a Bb, Ab, and G spoke to her and became the germinal motive for her work My Heart. A largely melancholy composition with a number of dramatic transitions and a glimmer of hope in the woodwinds, My Heart was an impressive show for the youngest of the night’s composers.

Garrett Tatum’s Paradise—Paradise Lost had a strong declamatory opening, great brass voicings, and rich string scoring, all leading to a playful waltz which occasionally straddled the line between whole tone and diatonic. Contrasts by Wells Leng was just that, relative to Tatum’s work. A slow entrance in the winds paved the way for odd-time, ostinato, pentatonic material treated polyphonically at first but also leaving space for a number of solo sections. Trevor Villwock’s When I Woke Up in the Forest wrapped up the first half of the show with Tchaikovskian orchestration and a focus on the flute.

Bleak Dawn by Behnam Arzaghi was the most contemplative work of the evening. A broad harmonic language and long lingering lines set the stage for a more focused mix of Persian folk tunes and lyrical melodies which played hide and seek in the texture. Brennan Anderson’s Downfall Rising was a fantasy narrative of sorts, complete with peasants, heroes, and villains drawn from his experience in writing music for video games. (I should mention that although this was the first time I’ve actually met Brennan in person, I’ve corresponded with him ever since he approached me for an internship a few years back. We weren’t able to make it work at the time but we’ve kept in touch, and I was happy to see that he’d made better use of his time than running to get coffee for me.) Brandon Maahs’s Song of Love and Joy, the first movement from his Symphony No. 1, had a number of compelling features, including thoughtful string orchestration, use of 7/8, and arguably the most thunderous “Kaboom Ending!” of the evening. Finally, Jared Beu’s Affirmation featured varied and rich harmonic language, strong changes of mood, and a wonderful interplay of harmonies in the brass and flourishes in the woodwinds.

Let me tell you, if you want to see some proud parents (and hear some great tunes!) then be sure to check out next year’s show. Music Director Peter Bay and the orchestra put all of their forces to bear on these works, and when the composers (dressed to the nines in everything from tuxedos to Charlie Chaplin bowlers—I’m looking at you Brennan) were acknowledged in the boxes…well, let’s just say if you could harness the beaming power of those parents, you could power the country for a month. Or the East Coast leg of the Fair Warning tour.

1. There are quite enough thoroughly embarrassing still photos. Thanks, Dad.