Students who improvise, in a rigorous context, become better musicians sooner; and the sooner, the better. Why are we waiting until students self-select to go to music school to introduce these ideas?

Face the Music’s 2013-14 season concluded with a collaboration between the experimental music theater group thingNY and six students. The goal was to create, over three intensive improvisation sessions, a group-composed piece that would be performed together at the Queens Museum. FTM Managing Director Vasudevan Panicker and I selected six students—three girls and three boys—who had a clear interest in improvisation and/or in theater and who seemed game. The result was In Space, which was performed around the Panorama at the museum. 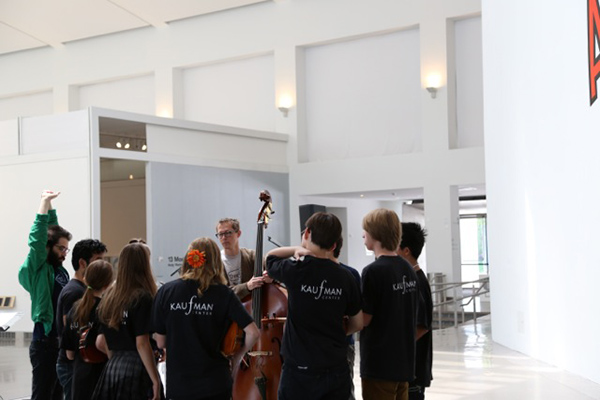 Paul Pinto, one of thingNY’s founders, reflected that while the Face the Music players were advanced, they tended to “all try and do their own thing” because they hadn’t worked together previously as an improvising ensemble. I commented that some of the students were disappointed because the resulting piece was very structured, when they had expected to engage in a massive open-ended jam session. (ThingNY and FTM started the first intensive with just such a jam session). This “is a useful way to get to know each other’s styles,” Pinto commented, but his goal was to use improvisation as a means to an end; in other words, as a tool for group composition. Improvisation as a technique, he points out, is different from improvisation as a piece; and furthermore, there are very few truly improvised pieces. Pinto told me that he feels most improvised pieces in the classical canon are really notated pieces that include improvisational elements. “A truly improvised work is freely improvised—every time is completely different.”

So, from an educational standpoint, what kind of improvisation should we be teaching? This seems to depend somewhat on the age group and skill level of the students involved. Both Pinto and Martha Mooke, who served as our first-ever composer-in-residence at the Special Music School this season, have had successful experiences teaching even very young students to improvise, but my area of expertise and interest falls in the pre-college realm. Based on my own observations, I would say that all pre-college students could benefit from improvisation experience prior to entering college or music school; it seems to have very tangible benefits.

In talking with Panicker, Mooke, and Pinto, they were strikingly aligned in their observations about the benefits of improvisation for students: it teaches collaboration; it teaches self-expression; and, most of all, it teaches listening.

As a former ear training teacher myself, I have to reflect on the fact that there is more deep listening happening in a well-run improvisation session than in many conventional ear training classes. I believe that this is at least partly because it places it in a high-stakes context that pairs listening with opportunities for self-expression.

An advanced improvisation student might become expert at identifying stylistic characteristics, Panicker mused, and using these as compositional tools.  It occurs to me, though, that this is itself a form of listening, because it is involves incorporating elements of music that the students have listened to in other contexts. 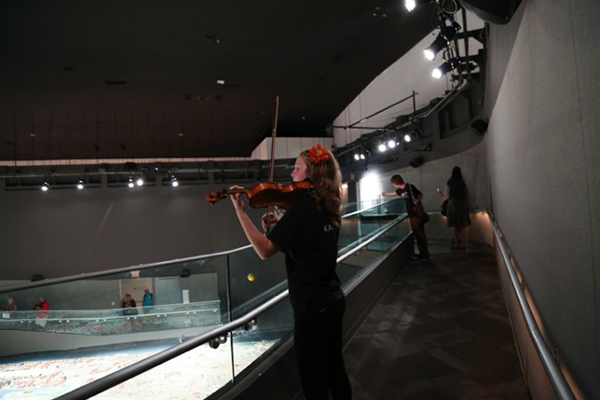 There are also a couple of “best practices” when introducing students to improvisation that seemed evident to all of us. One: the instrument tends to get in the way. In essence, the more facile a student is technically, the more prone they are to getting stuck, at least initially, because the options for self-expression are so vast that it’s hard to know where to start. In a workshop that the jazz quartet Gutbucket did for the SMS High School students last December, I saw them conduct an entire improvisation exercise in which they restricted the students to the use of one note; it was liberating for many of the students.

And this brings me to the second of the best practices: students need limits. Well, we all know that students need limits—especially Paris Lavidis, who had a habit of starting Quartet: This Side Up rehearsals with an exercise he calls “59 Seconds of Passionate Improv”—but, kidding aside, the right limiting parameters can make or break an improvisation environment.  “Everyone needs to be able to contribute, and follow, in a group improvisation,” Pinto pointed out, and the selection of good barriers can aid in making that happen.

In general, Face the Music tends to run ahead of itself and now we have to figure out where the next step lies in the area of improvisation. Do we go off in search of an improvisation curriculum? Do we write one? Maybe neither—or not yet, anyway.  In 2014-15, Improv Hour will continue—rechristened with the catchier name of Sound Bite Orchestra—and Panicker is going to lead them down some curricular-looking paths, introducing the techniques of Conduction (Butch Morrison) and Sound Painting (Walter Thompson).  But other than that, we will continue to program pieces that include improvisational elements and see where this leads.

Before closing this blog post by stepping up onto my usual soapbox, I should mention that there is a deep thread of “improvisation friendliness” that runs through the foundation of the Special Music School, and I secretly credit this with the fact that Face the Music got started at all. When SMS was founded back in 1996, it was based on (to my mind) a pair of strange bedfellow methodologies: on the one hand, the rigorous pre-conservatory path inherited from the Soviet special music school system; and on the other, the self-expression-encouraging philosophy of the Dalcroze School of New York. So along with a demanding program of instrumental skill-building, using (mostly) a well-trod line-up of dead composer pieces, students at SMS have always received a dose of improvisation in their theory classes, thanks to Anne Farber, Sean Hartley, and Cynthia Lilley. It’s no accident, in my mind, that some of the kids most excited, as young children, by improvising on the five-note xylophone, later become the kids who groove out to Artificial Life.

But now, the soapbox: students who improvise, in a rigorous context, become better musicians sooner; and the sooner, the better. Why are we waiting until students self-select to go to music school to introduce these ideas? It often seems that they are introduced haphazardly on the college level, as a quick ticket to vocational viability, and that’s often way too late. By introducing improvisation as a central part of the pre-college training of every young musician, we might achieve twin goals. One, we might produce card-carrying virtuosos who can express themselves in an authentic and unique way in front of interested and engaged audiences. Two, by encouraging self-expression earlier, we might encourage a greater diversity—even just brain diversity—in the students who decide they want to deal with the headaches of life as a professional musician, and our resultant cultural life could be much richer as a result.

Okay, peeps, want to take a crack at that? What experiences have you had with students and improvisation? Am I off in left field?