I’ve never had a piece played to such a large audience before. The energy of the crowd felt overwhelmingly positive; there were a lot of different ages of people, and you got the sense that everyone was excited to be there and anxious to hear what was going on in new music for orchestra.

Dress rehearsal! We go in concert order, with Michael Holloway’s lush Rhythm: Theta Beta Theta starting. Michael is, I believe, the youngest composer here this year, having just finished his undergraduate education (which he did in two years). His piece is impressively orchestrated, and does exactly what he described in his speech about it: it opens with slow and more luxuriously paced music, with faster music in the middle like the more active Beta brain-waves, and finally the Theta waves return to close the piece. His music has a breadth that seems beyond his years, and the orchestra really sounds fabulous playing it. 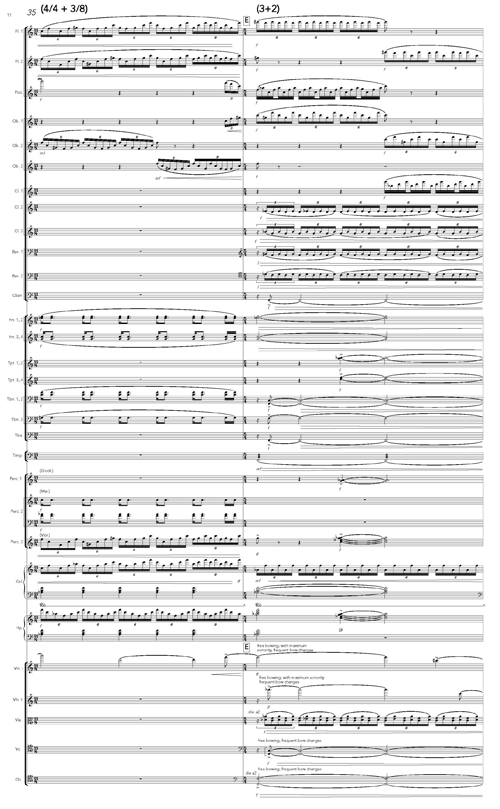 Excerpted from Michael R. Holloway’s Rhythm: Theta Beta Theta. © 2011 by Michael R. Holloway. Reproduced with the composer’s permission. International copyright secured. All rights reserved.
Andreia’s piece, like the geographical place, Xántara, that inspired her, is mysterious, elegant, magical. Her delicate textures and transparent orchestration are impressive. In her score, she uses such adjectives as “Floating” to impart the kind of playing she wants from the musicians. The ending particularly I found really breathtaking: quiet, with the kind of presence that demands a moment or two of silence from the listener before any applause would begin. 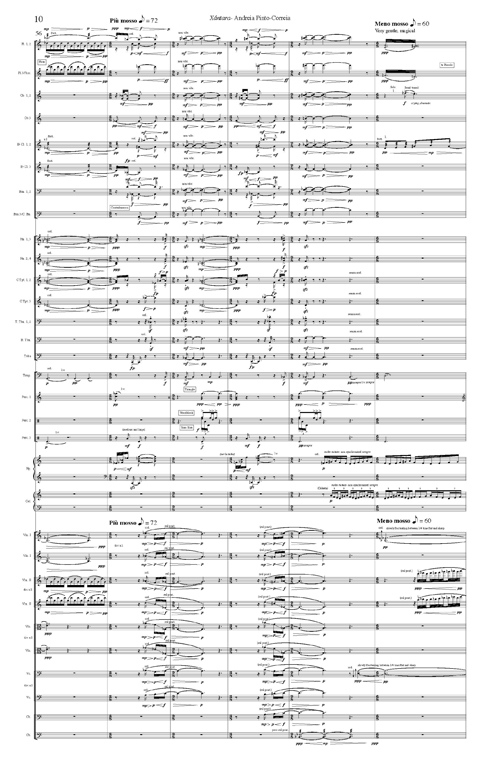 Excerpted from Andreia Pino-Correia’s Xántara. © 2011 by Andreia Pino-Correia, Aljezur Music (ASCAP). Reproduced with the composer’s permission. International copyright secured. All rights reserved.
My piece is in two movements: the GOD MUSIC movement, and the BUG MUSIC movement. In both, I was pushing canonic writing as far as I could, creating textures that feel to me colorful and exuberant, sometimes sounding statistical, sometimes highly organized. I’m very interested in the idea that my harmonies are organized by horizontal lines; and those lines are designed very carefully so that the harmonies will work out the way I want them to. I like my architecture to be clear, but I always strive for it to arise out of the materials I use: their details and internal directionality. 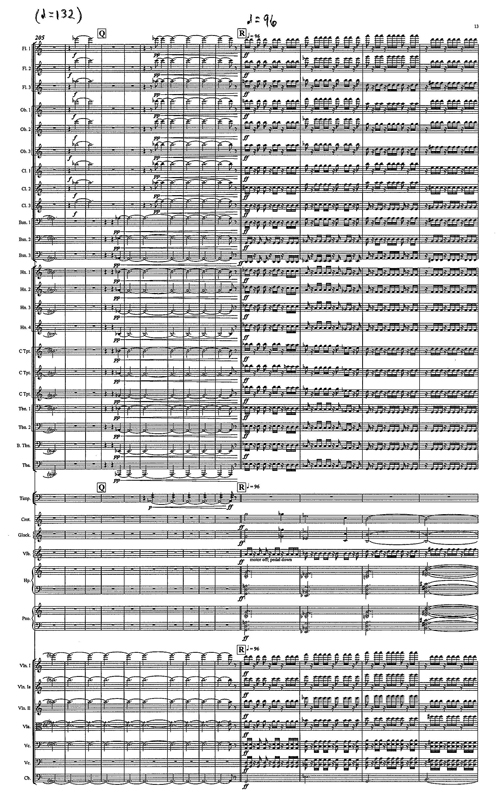 Excerpted from Hannah Lash’s God Music Bug Music: Two Movements for Orchestra. © 2011 by Hannah Lash administered exclusively worldwide by Schott Helicon Corporation, New York (BMI). Reproduced with the permission of the composer and publisher. International copyright secured. All rights reserved.
Shen Yiwen’s music has a certain meticulousness and clarity that are truly admirable. His piece does have a certain “American” sound, featuring broad, open sonorities and lush orchestration. It is brief: only about seven minutes. But one thing I noticed about all the pieces from my colleagues here is that each one is the right length. That’s not always the case—we’ve all sat through pieces that seem to last hours when in fact they’re only ten minutes. Or pieces that seem awkwardly truncated, as if the composer lost patience with his/her material. 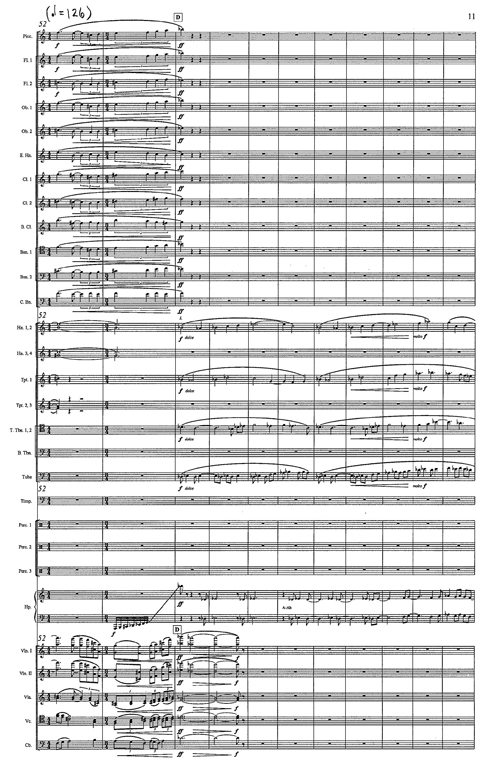 Excerpted from Shen Yiwen’s First Orchestral Essay. © 2010 by Shen Yiwen Reproduced with the composer’s permission. International copyright secured. All rights reserved.
Adrian’s piece Manchester is very quiet the whole way through, but incredibly detailed; it is about small things that happen within a broad framework—a framework that invites deep listening, meditation. It involves electronics that blend in and out of the live sound; their presence is never intrusive but rather they serve to expand the palette of sound. Adrian’s harmonies and timbres are inextricably linked in a way that displays real musical intelligence as well as a well-developed concept of what the music is. This is a piece that, despite its low dynamic level, has an extremely well-defined character whose presence commands the listener’s attention, pulls you in with its strong delicacy. It is anything but innocuous in its near silence. 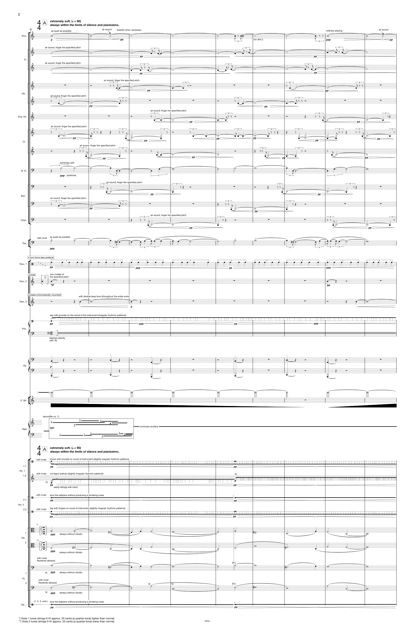 Excerpted from Adrian Knight’s Manchester for Orchestra. © 2008 by Adrian Knight, Pink Pamphlet. Reproduced with the composer’s permission. International copyright secured. All rights reserved.
Brian’s Collective Uncommon is almost outrageous in its imaginativeness, but avoids any sensationalism (despite the food instruments and the Tickle-Me-Elmo voice boxes); instead the music is really haunting and beautiful—yes, we are given aural images that are truly bizarre, but they are sensitively used and we come away feeling we’ve experienced something far more meaningful than a freak-show: something human, something beautiful and sad. 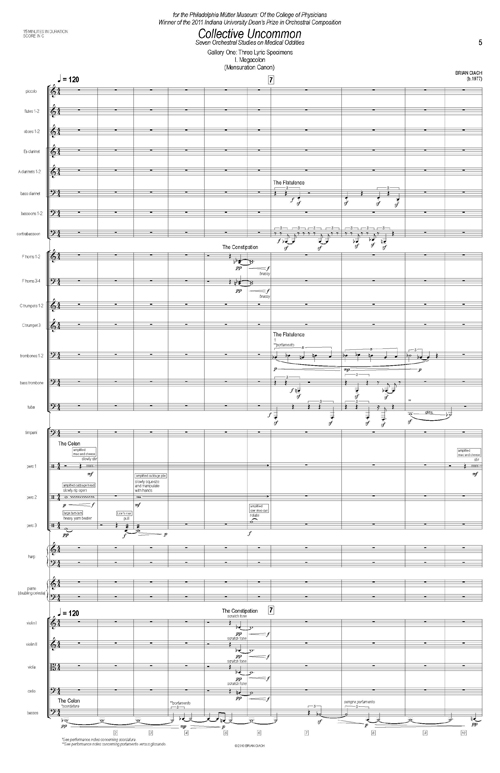 Excerpted from Brian Ciach’s Collective Uncommon for Orchestra. © 2010 by Brian Ciach. Reproduced with the composer’s permission. International copyright secured. All rights reserved.
After individual mentor meetings all afternoon with Maestro Vänskä, Aaron Jay Kernis, and Steven Stucky, we had a brief break before the concert. Then we all filed into the Green Room to meet with Fred Child from MPR, who would host the event, interviewing each of us briefly on stage before our pieces. Fred is a wonderful interviewer; he had listened to all our speeches online in this blog from the Donor Dinner, so he already had a sense of each of us.

When it came time to go into the hall, we found out that the house was really packed—both on the orchestra level, and at least the first tier. I’ve never had a piece played to such a large audience before. The energy of the crowd felt overwhelmingly positive; there were a lot of different ages of people, and you got the sense that everyone was excited to be there and anxious to hear what was going on in new music for orchestra.

I won’t go through all the pieces again since I’ve already done that from the dress rehearsal, but I will say that the orchestra sounded even better than they had earlier in the day. It really is a thrill to hear such a tremendous force onstage, no matter what the repertoire, but to have them playing your own music is really exhilarating!

There was a brief reception for us in the Green Room during intermission; and the other opportunity we had to interact with the audience directly was in a Q and A session after the concert. It was great to know from people’s questions how interested they were in new music, and how much they wanted to encourage us as relatively newer composers alive today.