In this new and somewhat turbulent era for classical music, our own personal success isn’t just about us anymore. The old model is no longer relevant because simply having a job or being a superstar doesn’t necessarily contribute to our communities or to our art.

Around Christmas last year, I received the music for an upcoming concert I was going to be playing with Chicago’s Ensemble Dal Niente. Being my usual neurotic self, I looked at the parts and immediately commenced freaking out by practicing furiously, even though I was technically on vacation. A few days later, my brother-in-law relayed to me a conversation that he’d had with his six-year-old daughter:

“Daddy, why does Auntie Sara play cello so much?”
“Because it’s her job. That’s what she does to earn money.”
“Daddy, that’s silly! Cello isn’t a job!!”

This whole episode reminded me of similar stories I’ve heard from friends and colleagues. Together we’ve rolled our eyes at the people in our lives who just don’t get what we do. What we often don’t admit out loud, though, is how hard we take it. So I started wondering: Why are musicians so on edge about the validity of what we do? What does it take to make us feel like we are successful? And how do we even begin to define success? 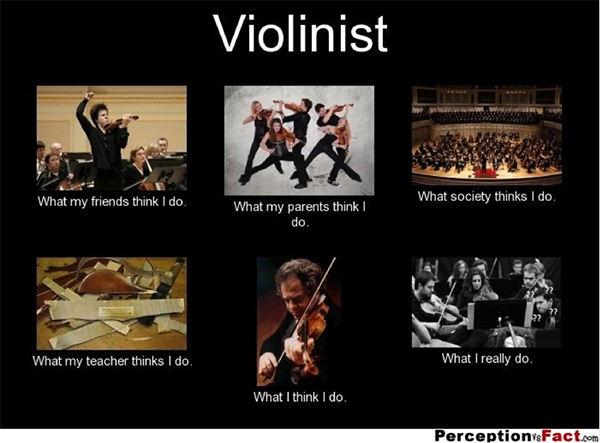 What it seems to come down to, in many cases, is that musicians are hardwired to base our sense of success on how our career is perceived by others. If you think about it, it makes sense: when others approve of our playing, we get good reviews, big audiences, standing ovations, fame, fortune, etc. Throughout school, auditions, and gigs, we’ve relied on the judgement of others to gauge our own talent, so it’s all too easy to allow their perceptions to determine how our professional career is going, too.
The root of the problem might be that the 21st-century classical musician doesn’t seem to have an updated guide to gauging success. Think about what you were taught in school about how to become “successful,” and where you would be now if you had followed that path. If you had truly succeeded, you would have either landed a full-time job in a major symphony orchestra or ensemble, accepted a tenure track faculty position at a prestigious university, or won first prize in a major international competition. No biggie. But seriously, is this model of success even valid anymore? Why are these still the only clear markers we have to “prove ourselves” in our field?

Because our views on success are so often skewed towards these milestones, musicians who take alternative paths are often unfairly looked upon as less successful. Our traditional ways of defining success are suddenly inapplicable, and this leads us to feel dubious about the legitimacy of someone who is forging their own entrepreneurial path, or who feels satisfied with their work, though it may be unconventional. If what you’re doing isn’t easy to slap a label on, then you must be failing…unless, of course, someone influential notices you and publicly declares your success. This is the sense I sometimes get, both from the outside world and even among musicians.

One emerging musician whom I know has done a lot of thinking on this subject is Meerenai Shim, a flautist who specializes in new and experimental music. When I asked her to define success, she laid out five separate definitions, from how she used to think of success to how she defines it now. She began with her view when she was a student that achieving success meant becoming famous or winning a big orchestra job (sound familiar?), went on to her real-world post-college impression that success meant being able to pay the bills as a full-time musician, to then land at her current definition: “Success to me is making meaningful art.” She has approached her career from all types of angles: gigging and teaching to make ends meet, getting a day job to allow herself the financial freedom to pursue her new music projects, and, ultimately, ditching both the teaching and the day job so she could focus solely on the music that is most important to her, which is turning out to be the key to achieving that last definition of success she came up with. Taking this approach certainly comes with its financial risks, of course (check out Meerenai’s blog post on “making it work”), but often the confidence that comes with taking those risks is what can lead to hard-earned successes, both musically and financially.

More and more musicians these days seem to be following the same line of thought as Meerenai. When I posed the question of how to define success on Twitter, many of the responses I got were along these lines:

The new music community is clearly thinking about success in new ways–ways that free us from external judgement and allow us to base our success on the achievement of personal goals, artistic fulfillment, and driving vision. But while it’s great that so many professional musicians are coming to these conclusions, I couldn’t help wondering whether the old model of success, the one that’s based on fame and fortune, is still what students and young professionals are clinging to. So on a recent trip to Miami, I spent an afternoon chatting on this topic with Howard Herring, the president of the New World Symphony.

As a New World alum myself, I know all too well the organization’s reputation for churning out young hotshot musicians who head straight from their NWS fellowships to the top symphony jobs around the country. And fifteen years ago at NWS, you might say that winning a symphony job was the official definition of success. However, orchestras aren’t as stable as they once were, and word has gotten out that the euphoria you might feel after winning an audition may not necessarily stick with you for the next 40 years on the job. What Howard pointed out at the very beginning of our talk was that there’s a big difference between a “job” and a “career.” A job is something that you get, a career is something that you build. When I asked him what definition of success he hopes to imprint on the NWS fellows, he explained that achieving success in one’s career comes from embodying these three principles:

“When you are true to those concepts,” Howard told me, “you can manage the potential and the problems, and the success is all yours.” And those concepts, according to Howard, are constantly morphing to fit in with each new era. Take inclusiveness, for instance. In the not-so-distant past, that may have meant playing an outreach concert in a nursing home or giving spoken program notes before a performance. But now–and this was when he started really getting excited–we’ve reached a new digital era that is changing the way we think and igniting our imaginations. No longer is our community limited to the audience in front of us or the city we live in. In the digital era, our community is truly global, and that makes the potential for inclusiveness, and therefore success, all the greater.

Howard admitted that, for a large number of the current NWS fellows, winning an orchestra job is still the most important measure of success. For now. “Far more musicians are cut out for this [alternative] type of career than they acknowledge,” he told me. He is giving young professionals the knowledge and the resources to eventually make their way to redefining success for themselves, while at the same time aware and accepting of the fact that those young professionals might not be ready to do so right away.
My biggest takeaway from the various responses that I heard from Howard, Meerenai, and others was that in this new and somewhat turbulent era for classical music, our own personal success isn’t just about us anymore. The old model is no longer relevant because simply having a job or being a superstar doesn’t necessarily contribute to our communities or to our art. Music is bigger than ourselves, and how we shape our careers affects the role that classical music will play in the lives of our children and grandchildren.

I had to chuckle as I thought back to that comment from my six-year-old niece. “Cello isn’t a job!” she protested. She was completely right. Success cannot be defined by how we make a living. What truly defines success is the way in which we incorporate independence, inclusiveness, and responsibility into our careers. When we focus on these principles, we succeed not only in satisfying our own artistic needs, but by also making a difference in the communities we live in and sustaining the art that we are passionate about. 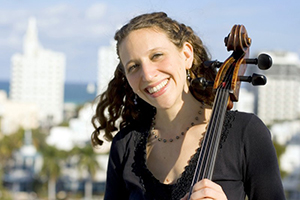 Sara Sitzer is a cellist based in Chicago.  A member of Chicago Q Ensemble and the Elgin Symphony, she has also been heard performing with the Milwaukee Symphony, Ensemble Dal Niente, Anaphora, New Millennium Orchestra, and the Firebird Chamber Orchestra in Miami.  Sitzer is founding artistic director of the Gesher Music Festival of Emerging Artists in St. Louis. She holds performance degrees from the University of Wisconsin and Boston University, and completed a three-year fellowship with the New World Symphony under the direction of Michael Tilson Thomas.