The Art of the $100 Guitar
NewMusicBox
Written By

A wide spectrum of guitarists have responded to the siren call of the $100 Guitar Project. No curatorial bar was set, no stylistic walls erected. It has been a community exercise, each musician encouraged to come to the project without preconceived ideas and to simply explore whatever the guitar suggests to them.

Video presentation by Molly Sheridan
Image of signed guitar courtesy Steve MacLean
*
Nick Didkovsky and Chuck O’Meara had something of a running joke going when it came to expensive guitars. The men would often taunt one another via email, trading ads for various high-priced instruments as they came up for sale alongside the suggestion that the recipient consider making the big ticket purchase. So Didkovsky says he was surprised to open “Subject: The Guitar of your Dreams” and find a link not to a $100,000 Fender, but to a nameless electric guitar going for $100 on the respected vintage guitar site Elderly Instruments.

“Maybe three or four of us should buy it together and share it,” Didkovsky fired back, but the joke turned onto a serious conversation, and he and O’Meara sent out a few emails to colleagues to gauge interest in a possible project. “By the next day, and this is no exaggeration, we had 25 guitarists on board who said ‘I would love to do a track with this.’ And we didn’t even own the guitar yet.”

On Oct 20, 2010, they made their buy. “It’s a very unique object,” Didkovsky explains, pointing out that the instrument’s one surviving pickup resembles an old radio. There is no brand name on it; though many have opinions, no one is really sure of its pedigree. And it has seen some wear and tear. “It’s replete with failures,” he admits. “You have to meet it on its own ground.” It’s the antithesis of guitar fetishism—it’s attractive because it’s so cheap.

Since that initial pitch, a wide spectrum of guitarists have responded to the siren call of the $100 Guitar Project, the players arriving through a network of friends and colleagues. No curatorial bar was set, no competition encouraged, no stylistic walls erected. It has been a community exercise, each musician taking ownership of the instrument for a week, encouraged to come to the project without preconceived ideas and to simply explore whatever the guitar suggests to them. Each participant is asked to record a short composition “that honors the guitar in some way,” then sign the guitar’s body (it now hosts archeological layers of signatures) and pass it on, often in person. After 65 participants opted in—enough music to fill a double CD release—the project stopped accepting more names. Bridge Records will release the complete set of recordings in December 2012.

“It’s really the story that is so beautiful about this,” says Didkovsky. “People have been very generous and that exchange has been spectacular.” 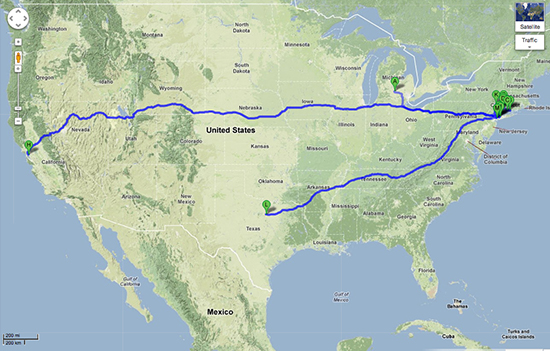 *
Much like the initial call, Didkovsky sent out word that a NewMusicBox story on the project was being filmed (see video above) and, on less that 24 hours notice, he and five of the project participants crowded into his Midtown practice space in New York City for a chat.

Mark Solomon quickly honed in on the element of nostalgia that pervaded the project in his mind. “What touched me about this particular conception is that every guitarists on the planet remembers their first guitar; it’s like your first love. And it’s generally a piece of crap—a $100-ish instrument.”

Blowing up that idea of the uniquely personal experience with the guitar, Bruce Eisenbeil pointed out that the resulting compositions will give listeners the chance to explore the styles of all kinds of musicians. “This one instrument is being used as a mode of expression. What is it that informs all of these people at this time? How do they make music? Why do they make music?”

Still, was this a gimmick, a serious art project, or did it encompass elements of both?

Caroline Feldmeier wasn’t shy about admitting that she was “crazy, crazy obsessive” about her composition. “I received the guitar from Nels Cline. So I knew there was a very high bar, and I definitely wanted to produce something that would be consistent with the high level of talent that is part of this project.”

Jesse Kranzler agreed, pointing that he “had to take it seriously to some extent,” since he was more accustomed to working alongside bandmates than playing alone in a solo context. Still, he acknowledged, “it’s kind of hard to take it too seriously when it’s such a fun, light-hearted project.”

Distilling down the enthusiasm in the room for the scope and talent the project encompassed, Joe Berger said plainly, “I think it’s going to be one of the most talked about guitar projects when it comes out. I’m certainly going to be talking about it.”

For his part, Didkovsky seems to have recovered his investment and then some. “Putting it out in the world, letting networking take it over, seeing it tumble from hand to hand, player to player, and without guiding it too much seeing what came out…It’s enriched my life tremendously.”