The 2000 Man—What Century Was This Anyway?

If you don’t know what Y2K is, be thankful, even though it inspired some interesting music.

In the August 1, 2000, “issue” of NewMusicBox, John Luther Adams imagined an “American Music Fund” in which “if you could dream it up, this fund would consider it.” It’s a concept we thought about a lot while creating New Music USA project grants last fall because the best way to serve new music is to ask practitioners what they need.

Conversation on NewMusicBox is essential for testing ideas that ultimately strengthen new music, and when you donate to New Music USA, you empower us to help solve problems. Please celebrate the 15th anniversary of NewMusicBox by making a gift to support conversation as well as action!

Do you remember where you were when we entered the new millennium? Well, I guess that depends on whether you believe that the 21st century began in the year 2000 or the year 2001. I definitely remember those debates. I’ve always been partial to the 2000 adherents, and perhaps am even more so now than I was back then, since when assessing the achievements of the new century less than a fifth of the way into it, it helps to be able to include an extra year’s worth of stuff. 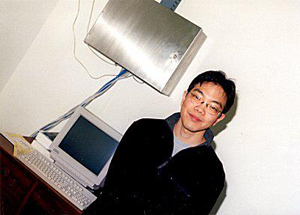 If anyone could defeat a potential Y2K catastrophe, it was Eugene Takahashi! (Photo by Richard Kessler.)

So, I’ll tell you exactly where I was at midnight on January 1, 2000: I was coordinating with NewMusicBox’s then-web designer Eugene Takahashi to make sure that our talk with Don Byron, our nationwide tour of jazz clubs, and the rest of the ninth “issue” of NewMusicBox was published without a hitch. Considering everyone’s fears about Y2K bugs, it was somewhat nerve wracking. (If you don’t know what I mean by an “issue”, you should look at the previous post of this 15th anniversary remembrance. If you don’t know what Y2K is, be thankful, even though it inspired some interesting music that found its way into our Online Library–originally called, ahem, NewMusicJukeBox–that launched two years later.) Anyway, ever since then it’s been a NewMusicBox tradition—even now that we publish content every weekday—to post our latest large-scale profile at the same moment the ball goes down at Times Square on New Year’s Eve. I know that makes us seem a tad NYC-centric, but since—even despite time zone differences—folks all over the planet seem to be glued to their TV sets when that happens (sure beats being there in person), it somehow feels appropriate.  It’s also a great excuse for getting out of New Year’s Eve parties. 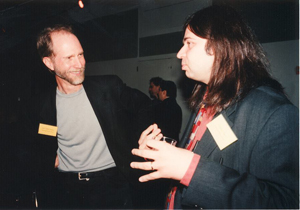 2014 Pulitzer Prize winning composer John Luther Adams (a.k.a. JLA), then the president of the American Music Center board, has been a mentor to me from the beginning of NewMusicBox.

As for other events from the rest of that year that still resonate with me, I’ll probably never forget the brouhaha that erupted when Lewis Spratlan won the 2000 Pulitzer Prize for Music for a piece he had composed 22 years earlier. A lot of people failed to realize that the prize was not for a “distinguished musical composition of significant dimension by an American” written during the previous year, but rather for one “that has had its first performance in the United States during the year.”  (Now, of course, the prize is awarded to a “distinguished musical composition by an American that has had its first performance or recording in the United States during the year.”) I remember vowing that we’d talk to whomever won that prize and feature that person in NewMusicBox and we did, but in the years since we’ve gotten faster and now report on the winner of the Pulitzer as soon as it is announced. Miraculously, despite the seemingly instantaneous transmissions of social media, we’ve managed to stay on top of that particular game.  But what is perhaps the most mind-bogglingly gratifying coda to this story is that this year, the person who back in 2000 wrote a provocative alternative reality history of the Pulitzer Prize, finally won the prize himself! 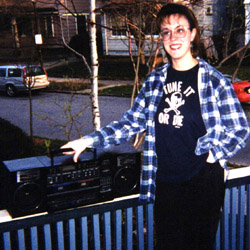 It was clear from our first correspondence that Jenny Undercofler belonged in NewMusicBox. (Photo by Brian Krinke.)

I also remember how the so-called “Denver Project” (sounds like a CIA code name) still held sway over the music programming at most “public radio stations” across the United States and how a young graduate student named Jenny Undercofler responded to it. We were so blown away by her writing and her zeal that when NewMusicBox’s Associate Editor Nathan Michel left NewMusicBox to become a rock star (which, eventually, he kinda did), we hired her! (She has since gone on to prove to the world that young people can be some of the best advocates for new music through her work with Face The Music.)
I still tell people about the moment in our talk with Elliott Carter when he said that minimalism reminded him of cat food commercials. (The connection between minimalism and the semiotics of advertising was the central thesis of a book by Robert Fink published five years later that found its way into NewMusicBox the following year.) I still regret that we weren’t able to share Carter’s quote on video—bad lighting—but that didn’t stop us from finally boldly marching into the 21st century with video clips of minimalist pioneer Meredith Monk the following month.

Perhaps my most vivid memory mirrors those of most Americans and concerns the aftermath of the controversial 2000 U.S. presidential election. I traveled to California the day after Election Day (to record conversations with Pauline Oliveros, Joan Jeanrenaud, and John Adams) still not knowing who the next person to hold our nation’s highest office would be, yet suddenly being minutely aware of “hanging chads” which somehow got worked into every joke. (Before that election, we had a few jokes of our own….) Maybe now that the man who ultimately wound up being our next Commander-in-Chief for the next eight years has taken up painting, he’ll get more interested in music and start reading NewMusicBox!
What are some of your memories of the year that was either the last year of the 20th century or the first year of the 21st?