New music is not new to Austin, but its supporters have largely been of the grassroot variety and its funding has typically come in the form of modest ticket prices, tip jars, and any number of thankless day jobs. Now one of the big players in town, Texas Performing Arts, is using a significant new grant to throw its weight behind not only the creation of new music, but also its presentation to a new audience.

Ed. Note: In the coming weeks, NewMusicBox readers will be introduced to a new team of regional editors stationed in four cities across the country. These contributors will be our eyes and ears on the ground, surveying the new music landscape in their areas and delivering regular coverage.

To kick things off, we welcome Andrew Sigler of Austin, Texas, to the fold. –MS

New music is not new to Austin, but its supporters have largely been of the grassroot variety and its funding has typically come in the form of modest ticket prices, tip jars, and any number of thankless day jobs. Now one of the big players in town, Texas Performing Arts, is using a significant new grant to throw its weight behind not only the creation of new music, but also its presentation to a new audience.

Texas Performing Arts, which serves both the University of Texas and the Austin community, has recently received a $450,000 grant from the Andrew W. Mellon Foundation, allowing it to continue its tradition of presenting world-class music, theatre, dance, and conversation. One third of the grant is contingent on matching funds, while the remaining support will then be matched by the executive vice president and provost of the University of Texas as well as the dean of the College of Fine Arts, bringing the total figure to $900,000. A figure worth noting in a world where more than a few of our musical institutions have taken it on the chin as of late, and in a state where the University of Texas has had significant cuts and losses across the board. 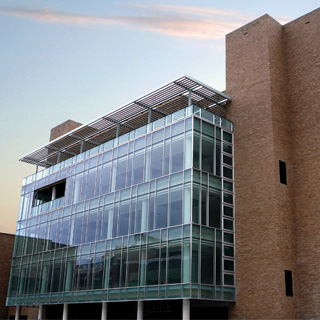 In some settings, this event might simply bolster the old guard while dealing new music short-shrift, but not this time. In recent years TPA has featured such new music darlings as eighth blackbird (with Steve Mackey and Rinde Eckert), Bang on a Can All-Stars, and the San Francisco Jazz Collective, as well as contemporary artists from a number of other disciplines including writer Bruce Norris, and forthcoming engagements with author Jonathan Franzen and actor John Malkovich. With this significant infusion of funding, Director Kathy Panoff plans to build on her two years at the helm by commissioning new pieces, bringing in artists for residencies, developing interdisciplinary works, and working with area members of the Austin art community to further improve the arts in Austin.

Here’s the breakdown of how the money will be used over the next three years:

45% of the grant is set aside to support interdisciplinary projects including John Luther Adams’s opera Ilimaq, Rappahannock County by Ricky Ian Gordon and Mark Campbell, The Infernal Comedy: Confessions of a Serial Killer featuring John Malkovich, and a collaboration between Laurie Anderson and Kronos Quartet.

25% will feature commissions of new music including a work for string quartet and chamber orchestra by Kevin Puts, and a double string quartet by Dan Welcher, who are former and current members of the UT composition faculty respectively.

25% will support artist residencies including eighth blackbird, So Percussion, and Brooklyn Rider.

The final 5% of the grant will be used to develop a Classical Music Task Force to identify and overcome barriers to classical music presentation in Austin.

Now, even I’ve been guilty of using the well-worn moniker (and city council anointed…its 20th anniversary is August 29 of this year) “Live Music Capital of the World” to describe Austin, but Dean of the College of Fine Arts Dean Dempster thinks that it descriptive of a wider range of music than it is at present. Says Dempster, “The ‘live music capital’ can be and should be a force for reviving live audiences for concert and ‘art music,’ as much as it is for popular and folk traditions. This prestigious grant from The Andrew W. Mellon Foundation is a resounding affirmation of Director Kathy Panoff’s vision of UT and Austin as a creative hub for the next generation of classical music performance and presenting. Texas Performing Arts’ classical music initiative promises to bring a cutting-edge sophistication to the cultural life of our campus and community.”

New Music in Austin would not be what it is without being a bit funky, both in its content and presentation, and these recent developments will not likely alter that character. However, if Panoff and the TPA are successful, particularly in the exploration of how new music is presented, it could be a significant step towards removing some of the barriers that remain between audiences and presenters. And if the audiences are open to the new ideas, it could open up a few wait staff and dish-washer gigs as well.