Tempering My Friends Anxiety and Doubt

My first reaction was: “Yes! Hell yes! Let’s do it and let’s kick ass at it!” My second reaction was: “Matt, there is no goddamned way on Earth you could do something as complicated and high-stakes as starting a brand new music conference.” Enter my good friends Anxiety and Doubt. They set up shop and didn’t leave until after this whole thing was finished.

[Ed Note: This month, in anticipation of the next New Music Gathering at the Peabody Institute in Baltimore (Jan 7-9, 2016), we’ve asked each of the founders of this now-annual event to reflect on the whys and wherefores of the new music community coming together in this way. Last week, Daniel Felsenfeld described the initial conversations, online and off, that led to the conceptualization of NMG. In the coming weeks, Lainie Fefferman and Mary Kouyoumdjian will offer some observations about the upcoming NMG and will also look ahead to its future, but this week Matt Marks takes us from those initial conversations to the first gathering at San Francisco Conservatory. – FJO]

Daniel Felsenfeld’s lovely post before this one – which elicited from me a good amount of teary-eyed nostalgia – was called “Gathering Storm: How We Made a Conference”. Based on my experience, I might amend that subtitle to “Oh shit… We made a conference”, a phrase I’ve used when asked exactly how New Music Gathering came about. One of the strange and beautiful things about growing up and becoming a professional is realizing just how rarely things come together in the Grown-up, Professional way you expect they will.

As Danny mentioned, I was still high from a meeting of new music organizations that was set up by the Andrew W. Mellon Foundation, where I was representing Alarm Will Sound, when I made the Facebook post that sparked NMG. In the meeting we discussed the glaring lack of a centralized event in which new music professionals could come together and do what we in that room were doing: sharing our challenges, successes, failures, hopes, and fears. Afterwards, I clacked out a quick sum-up onto Facebook, ending with that big question: “Why isn’t there something like this?”

Along with a flurry of supportive comments from members of the new music community, I received two fateful direct messages. One was from Danny saying, essentially, “There should be, and we should do it.” and another was from MaryClare Brzytwa of the San Francisco Conservatory of Music saying, essentially, “There should be, and you should do it here.”

Now, Danny already did a great summary of what happened at the first NMG. I thought I’d give a, let’s say, emotional summary of my experience, in the interest of demystifying the process of taking on such a challenge. Hopefully it might encourage other people to try and do more crazy things like we did.

My first reaction to these messages was: “Yes! Hell yes! Let’s do it and let’s kick ass at it!”

My second reaction was: “Matt, there is no goddamned way on Earth you could do something as complicated and high-stakes as starting a brand new music conference.”

Enter my good friends Anxiety and Doubt. They set up shop and didn’t leave until after this whole thing was finished.

Whenever I thought about the narrative of what we were doing: the scope, the commitment, all the people involved, all the people I would let down if it didn’t work, how a conference should go, the type of person who organizes a conference (in short, whenever I created fictionalized versions of our endeavor) it seemed far too challenging an overall task to surmount. But whenever I focused on each individual task to get done—setting up a coffee meeting, shooting off an email, making a list of things we might have to buy—the grand idea of a conference appeared less and less insurmountable.

Throughout the long process of organizing NMG, it became a daily battle of my imagination vs. the reality of small things to get done. I’d find myself delaying on sending an email because of my fear that, say, the featured performer might not be available to perform on the day we needed them to, or I might ask too much of someone and they might get offended. My imagined consequences were always catastrophic. And they never really came true. When difficulties did arise, they were almost always manageable and, at worst, meant a commitment of plain-old time and effort to work through.

One very smart decision of Danny’s and mine was to invite more people to join the team in order to help alleviate the load and make smarter decisions. Enter Lainie Fefferman and Mary Kouyoumdjian. Lainie I’d known from her incredible organizational work with the New Music Bake Sale and Mary from her indefatigable production work with the ensemble Hotel Elefant. Our regular meetings at Nunu Chocolates in Brooklyn Heights were a fascinating blend of the wild dreaming of possibilities with the cold, hard pragmatism of making it all function—and with a minuscule budget to boot! We had the ideals of what we wanted of a new music conference –the spirit of collaboration, support, sharing, creating– and what we didn’t want –the spirit of competition, commerce, hierarchy. 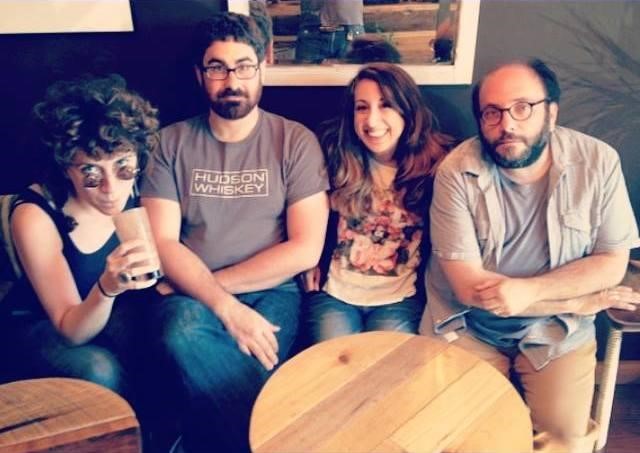 I think it was this sense of creating something new, unique, and supportive that helped temper the efforts of my old friends Anxiety and Doubt. To a large extent, organizing NMG felt more like creative work than any production work I had done in the past. This has also led to a new-found admiration in me for people who do great work in fields that aren’t typically considered “creative.” I’m not sure if the fact that all four of us are composers made us better at our task, but knowing our ultimate goal was to facilitate the creation and performance of new music certainly helped it from feeling too laborious.

It also helped greatly having our main collaborator at SFCM be MaryClare Brzytwa (another composer/performer). All of this could have easily remained yet another lofty idea in another Facebook thread if she hadn’t stepped up and recognized the potential in such an event and how it aligned with her long-term vision and that of SFCM President David H. Stull; a major goal of theirs is to become the modern center for classical and contemporary music. Inviting Claire Chase to be our keynote speaker was their great idea and, coincidentally, Claire—in addition to being a true symbol of our spirit—was also in attendance at that very Mellon Foundation meeting (and was a classmate of President Stull’s from Oberlin!). I think what attracted SFCM to our budding conference was its freshness, its experimental approach, and the fact that we didn’t have the baggage of a long tradition of former conferences or solidified preconceptions of how a conference should happen. It still stuns me to this day that they had enough faith to offer their space and support for us to try and pull off an event like this. And excitingly for us, their new provost and dean, Kate Sheeran, is an alum of NMG 2015!

Now, before this starts to come off as yet another inspirational “Believe in yourself and you can achieve anything!”-post, I want to note that we were extraordinarily lucky with putting on the first NMG. The stars aligned, we had great support, and the time was right. There are any number of things that could have gone wrong and perhaps I wouldn’t be writing this post right now. But, speaking personally, I found myself assuming that many more things would go wrong than actually did, and those difficulties we did face (and there were many) all ended up being relatively manageable. For me, the greatest challenge in putting on a new music conference was conceptual. In the end, it wasn’t a matter of asking myself “Can I organize and put on a successful conference?”, it was a matter of having a rough plan and asking myself “Can I do this concrete amount of work today?” and the answer was almost always “Yes.”

As a composer, I’ll sometimes have the experience of hearing a piece of mine being performed and thinking, “Wait, did I write that? How did I write that?” because the hours and hours of plunking away at the piano and shifting dynamics in Sibelius blur away in my memory. Similarly, I’ll sometimes think to myself, “Wait, did we really put on a conference? How on Earth did we do that?” But, wonderfully, we get to see the fruits of our labor in the form of new collaborations and commissions continually happening due to people who formed connections at last year’s NMG, such as the Twitter-based new music discussion forum Musochat and commissioning projects by Michael Hall and Christian Hertzog, to name a few. Witnessing new art and ideas arising from our little conference is a creative feeling completely unlike that of mere self-expression. It’s what makes me experience more excitement and anticipation for the next NMG at the Peabody Institute in Baltimore, and less anxiety and doubt.