One of the hallmarks of many different kinds of music performance—whether it’s a classical piano recital, a jazz combo in a club, or an arena rock show—is the demonstration of extraordinary physical feats on musical instruments. A cult of virtuosity has perpetuated the belief that the harder something is to play, and hence the fewer people who are able to play it, the better the music, and that the rare specimens of humanity who are able to play such music have special superhuman powers. At the same time, embedded in the word virtuoso is the word virtuous, implying that the rest of us who can’t scale these heights are somehow lacking in moral goodness.

Composer/performer Molly Joyce explained to us when we visited her in Washington, D.C. at the Halcyon Arts Lab, where she’s in residence this year, why perpetuating the notion that only a small select few are physically worthy enough excludes most people from the experience of making and ultimately enjoying art:

I think it’s problematic when one type of body or one type of being is reinforced through new music that still seeks a physically virtuosic connection. And I think that’s why, at least for myself, I always try, in my own passive way, to hopefully suggest other types of physicality.

Although she eschewed pyrotechnics in her own music long before she publicly identified as disabled (which was only about two years ago), Joyce has found many alternatives to virtuosity since embarking on exploring disability aesthetics as an artistic pursuit. For her, vulnerability is the new virtuosity. As she explains, “It’s not like you have to necessarily get rid of virtuosity all together, but you can reimagine it through other forms.”

She realizes, however, that music lags behind other artistic disciplines in embracing disability, and because of that she has been drawn to working with video artists and choreographers. One of the most fascinating projects she has been involved with is Breaking and Entering, a collaboration with the disabled interdisplinary artist Jerron Herman, which was awarded a 2019 New Music USA Project Grant. During the course of the piece, she and Herman swap roles—she dances and he sings:

My dance is definitely not super on point, and he’s not super in tune all the time, but the whole point for us is, through the disability aesthetic, we’re coming together. It’s not perfect. There are enough mistakes and we’re showing this, and also showing our vulnerability through that, a breaking and entering through, hopefully, to something else. That’s just as interesting as a very virtuosic piece.

[Ed. Note: This month, guitarist Jiji will perform Molly Joyce’s Plus and Minus at Arizona State University in Tempe, AZ (February 1). The South Carolina Intercollegiate Band, conducted by Jack Stamp, will perform her All or Nothing in Columbia, S.C. (February 8). NakedEye Ensemble will perform Less is More at The Cell in New York City (February 16). Cellist Alistair Sung will perform Tunnelvision at Batavierhuis in Rotterdam, Netherlands (February 20), and the Harvard Glee Club, conducted by Andrew Clark, will premiere a new Molly Joyce work with text by Marco Grosse at Harvard University in Cambridge, MA (February 21). On March 31, Joyce will moderate a Disability and Creativity Panel at the Halcyon Arts Lab in Washington, D.C., and on May 15, New Amsterdam Records will release her first full-length album Breaking and Entering which features her voice, vintage toy organ, and electronic layering of both sources “in an act to reimagine disability within the human body.”]

Vulnerability is a new virtuosity. 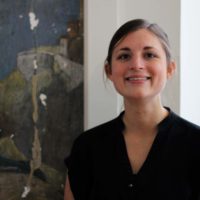 Music and the arts in general should be more a place of personal expression.

There are adaptive instruments, but you don’t see those at concerts.

The first contemporary composers introduced to me by my high school composition teacher were Philip Glass and Steve Reich.

Not everything has to be perfect all the time.

I don’t really care about crediting too much.

What does weakness mean for me? I don’t know if I have the answers yet.