A 19th-century French composition and an 18th-century Vietnamese traditional instrument can create a strikingly engaging current musical story together, and as Van-Anh Vo (who often goes by Vanessa in the States) performed Gnossienne No. 3 on the dan bau, playing up the instrument’s haunting moans, the audience sat transfixed. Satie’s well-worn melody suddenly pulsed with fresh life.

Vo speaks with moving passion about the impact of American diversity on the evolution of her musical voice since she emigrated from Vietnam in the late 1990s. An award-winning traditional performer and educator in her native country, Vo has found a particular freedom in the myriad genres and styles of music that surround her here—an influence that has filtered into both her musical ideas and the instruments and techniques she uses to communicate them. “I think I find great opportunity as a musician and composer here,” Vo explains. “I can do what I want. I can follow my inner voice—what I hear in my mind and what I feel I need to express.”

On the heels of the release of Three-Mountain Pass, a recent collection of her compositions and arrangements, Vo traveled across the country from her current home in the Bay Area to present many of the tracks during a performance on the Millennium Stage at the Kennedy Center in Washington D.C. Out of a suitcase and a few modestly sized bags, she set up a small orchestra of traditional Vietnamese instruments (the dan tranh, dan bau, and dan t’rung) plus the hang, a modern piece of Swiss percussion. She moved easily from one to the next during her set, explaining to the gathered audience the folktale references and classic Vietnamese poetry that often inspire her compositions. 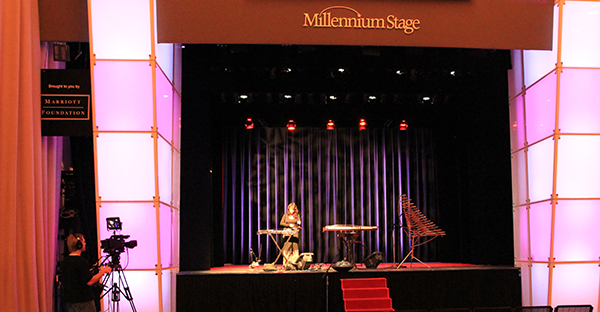 Vo performing at the Kennedy Center in Washington D.C.

Indeed, Vo’s energy and enthusiasm for musical creativity seems to transcend any particular instrument and instead feed off a fundamental sonic curiosity, as well as a desire to reflect on her cultural heritage and share those sounds with new ears. It’s a dialog that has led her to collaborations with musical neighbors such as the Kronos Quartet. “I see how things can be done and they help me to open even wider,” Vo says, noting the confidence such collaborations have given her to try new extended techniques such as using a violin bow on her single-string dan bau or plucking very close to the bridge of the dan tranh—a forbidden zone in traditional playing. In return, she has also passed on some of the non-notatable slide and phrasing aspects of Vietnamese music as Kronos worked on her Green River Delta.  The project was a success; in the end, she says, her teachers back in Vietnam suggested that perhaps she had swapped these four American guys with native players.

This spirit of collaboration has also led her to work with instrument makers to redesign the dan tranh to allow for faster and more flexible retuning during performances, but the modifications also meant she had to readjust everything about her playing. She admits that it “was really challenging, but you learn to conquer it. That’s the best thing maybe to happen to me.”
Interestingly, Vo draws strong connections between American jazz and the improvisation involved in traditional Vietnamese music—at least to a point. In other ways, however, musical life in Vietnam felt very conservative. Vo also recalls feeling censored by what the government felt was appropriate to play in concert.

Ultimately the distance has allowed Vo to appreciate the culture and history of her native country with a deeper awareness. “It is very important that you know who you are and where you come from, so I know that my roots are in Vietnam,” Vo acknowledges. “But the tree has to adjust to the new environment and bear the new fruit, otherwise it will die.”