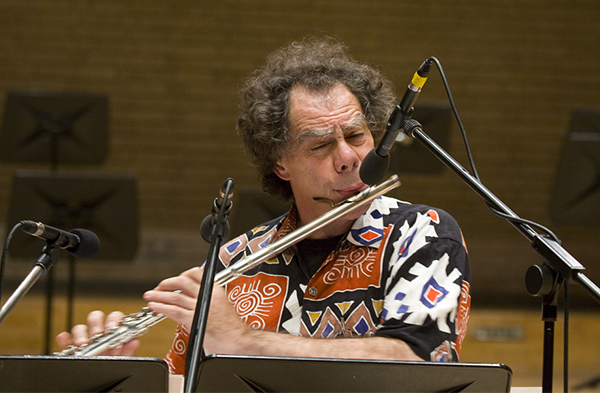 Composer and flutist Robert Dick, or rather his much-praised manual on extended techniques The Other Flute, made an unexpected appearance on network TV this week thanks to a Jimmy Fallon sketch. The segment was devoted to a short stack of books that Fallon suggested “you probably should avoid reading this year.”

It’s perhaps naive to expect sharp, music-based humor during late night television, but the 50 seconds Fallon devoted to talking about the book consisted exclusively of sexual innuendo and character assault related the book’s title and the author’s name. During Fallon’s final remarks on the book, he turns the author shot towards the camera and asks, “Does he look like a dick to you?” The audience cheers.

(Fallon’s comments on The Other Flute begin at 2:18.)
The responses under the YouTube posting of the segment are peppered with an uncharacteristic level of smart criticism, and now Dick himself is asking friends and colleagues to reach out to the Tonight Show and support his appearance on a future episode to play The Other Flute and “blow the minds of the national TV audience.” Those who wish to add their comments can contact the show online via the network’s website or Fallon’s Facebook page.

Meanwhile, it’s a book about modern flute technique. Can someone write Fallon some better material at least?

Unfamiliar with Robert Dick’s pioneering work? Catch up with this NewMusicBox piece or buy his book.

When I first saw the sketch “Do Not Read — THE OTHER FLUTE” on the Tonight Show, I was incredulous, hurt and angry. This was the same, lame, “dick humor” that I first encountered at age 5. And the jokes were way far from the best I’ve heard (or sometimes made). Then I realized that, in its own bizarre way, a unique opportunity had fallen out of the sky. Because my public persona is really funny and entertaining, I might have the chance to speak up for everyone who has been mocked for being different in some way. Can you hear me, Willy the Whale, with your three voices, shot dead on the stage of the Metropolitan Opera House? (I might have gotten the whole multiphonic idea from you, pal!)

And, I might have the chance to play my music for a huge audience and to show the world just how cool creativity really is. That’s why I’m asking everyone to contact the Tonight Show through their FaceBook page or to Tweet them (#InviteRobertDick @FallonTonight) to let them know that you’d love to see me on the show and that I will rock them to the core of their being.

The outpouring of support has touched me deeply. Oft times, we creators in the non-commerial realm feel that very few are listening to our music — in the last couple of days I’ve felt, as never before, that my life and work have made a difference to very many people. I’m truly humbled and grateful.

So please keep the flood of FaceBook posts and Tweets going to Tonight. If its going to happen, it will happen fast, so please act right when you read this. 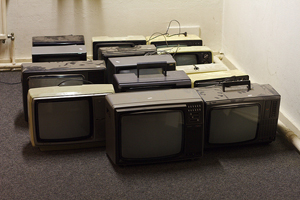 A couple of months ago, the Hollywood Reporter broke the news that Steven Spielberg and George Lucas had spoken about a potential implosion within the film industry during a discussion at the University of Southern California. Spielberg, addressing the current situation within the major studios, said, “There’s going to be an implosion where three or four or maybe even a half-dozen megabudget movies are going to go crashing into the ground, and that’s going to change the paradigm.” “The pathway to get into theaters is really getting smaller and smaller,” Lucas added. Paul Bond, the article’s author, writes, “Lucas lamented the high cost of marketing movies and the urge to make them for the masses while ignoring niche audiences.”
Sounds a little familiar, no? Just substitute “movies” with “symphony orchestras” and “theaters” with “symphonic concert halls” and the parallels between the film industry and the concert music community are hard to miss, especially if you compare the viewpoint of a filmmaker with the perspective of a concert composer. It’s never been easy for a composer to procure a slot on a symphony orchestra’s performance calendar, but with several years of lean times and structural upheavals for many of the major symphony orchestras, that option has become even more tenuous.

An interesting correlation can be seen between how creators and performers in both disciplines have, over time, maneuvered around those rising costs and diminishing opportunities. In the early 1990s, cable networks such as HBO began self-producing their own content. At first, the series were somewhat similar to those on traditional television in scope and tenor (The Kids in the Hall, The Larry Sanders Show, Arli$$), but by the late ‘90s with series like The Sopranos, Band of Brothers, Oz, Six Feet Under, and The Wire, audiences were introduced to material with much broader and more nuanced dramatic and narrative arcs than anything being produced by the traditional networks. Soon shows like Deadwood and Rome were attempting to bring large-screen production values to the “small screen.” Although both of those series were relatively short-lived, they set the stage for other programs—Game of Thrones, Boardwalk Empire, Mad Men, The Walking Dead, Sherlock, and the Netflix-produced series House of Cards—that give their creators license work with broad, filmic gestures and concepts while still keeping the ability to develop characters to a much greater degree than the time limits of the big screen allows.

In the late ’90s, around the same time that cable networks were experimenting with these new paradigms, the contemporary concert world was beginning to see their own models begin to evolve. Up until that point there were still just a handful of top-notch chamber ensembles—the Kronos and Arditti Quartets or the Bang on a Can All-Stars, for example—that focused on new music. By the late ‘90s and early ‘00s, however, a new crop of chamber ensembles began to evolve out of the graduate programs at Oberlin, Yale, Eastman, and other institutions—such as eighth blackbird, International Contemporary Ensemble, So Percussion, and Alarm Will Sound—that seemingly ignored pre-conceived ideas of what chamber ensembles could and should do. It did not take long for performers to see both new music and the chamber ensemble model as viable options. As a result, over the past ten years there has been a strikingly robust increase in the number and scope of chamber ensembles across the country to the point where one could argue that the chamber ensemble has usurped the symphony orchestra as the primary artistic vehicle for a large number of composers today.

The parallels between the emergence of cable television and contemporary music-focused chamber ensembles are numerous. Both are definitely creating new paradigms within their disciplines. However, both fields still experience significant challenges. Cable shows are dependent on the continued support of their studios, and, without that support, they run the risk of being cancelled before their stories are finished. Composers who write for chamber ensembles don’t usually run the risk of having their works “cancelled” mid-stream (though that does paint a darkly humorous picture), but one could wonder whether or not such a focus on small- and medium-sized musical palettes might have unintended long-term effects on the repertoire of the future. An advantage of writing for a large ensemble with a relatively fixed instrumentation is the opportunity for other orchestras or bands to play that work, but with so many chamber ensembles creating their own “niche markets,” the longevity of this repertoire could become an issue down the road.

The future of small-screen programs is attached to availability, as DVDs and online media such at Netflix and iTunes allow for audiences to access the programs. With music, it’s not quite as clear-cut and, while I don’t mean to sound anti-chamber ensemble in any way, I do wonder what, if any, effect a long and protracted emphasis on chamber ensembles may have on the contemporary music of the future.