It’s often surprising the way things turn around if enough time passes. Jonathan Kramer was my first composition teacher: I was an undergraduate history major at Yale, increasingly possessed by music and the need to write it, yet seeing no way I could move beyond the scribbles of a dilettante. On a whim (more like a desperate lunge) I made contact with Jonathan and was allowed into his composition class, which then led to lessons. I graduated still a history major, but also a composer…for the rest of my life. Jonathan saved my life.

He and I stayed in touch over the years, as he undertook a life that led him to Cincinnati and then eventually culminated in a position at Columbia. Jonathan had established a reputation as both theorist and composer by this point, and his book The Time of Music (published in 1988) marked him as one of the most original musical thinkers of his generation. (Though currently out of print, it remains enormously influential.)

The next major project on Jonathan’s desk was a book on musical postmodernism. His own music was always an original synthesis—I was struck that works of his I heard in college seemed to be a wonderful blend of minimalist repetition and restriction with modernist structures. So it’s not too surprising that the eclecticism and incongruities of postmodernism, as it arose in the 1970s and ’80s, would appeal to him, and increasingly he identified his own music as postmodernist in style. Moreover, his restless intellectual curiosity led him to want to discover the underpinning principles of postmodern practice from a broader perspective, something that satisfied the theorist and aesthetician in him (while further fertilizing his own art).

I met Jonathan periodically in New York once he was settled there, and knew about the book. It sounded like an enormous endeavor (and enormously ambitious; it was difficult to see how anyone could undertake such a vast challenge, a trip through a hall of mirrors). And then, suddenly, one day in 2004 I heard in an email from a friend that Jonathan had died. To say it was a shock is an understatement, because he was only 62. In fact, only about three months before, we had shared a program as part of Andrea Clearfield’s loft concerts in Philadelphia, sitting together on a sofa and listening to our respective pieces. I was to hear afterwards that his end came unexpectedly from a disease that had laid latent throughout his life. (The New York Times reported it as leukemia.)

And so suddenly the youngest of my major teachers was gone, the one I always expected would last the longest. I thought passingly of his postmodernism book, but I assumed it was lost forever.

And then around 2009 my friend Kyle Gann told me that he had a copy of a draft of the book, titled from the very beginning as Postmodern Music, Postmodern Listening. Jonathan’s widow, Deborah Bradley-Kramer, and Jann Pasler (a musicologist colleague and friend of Jonathan’s at UC San Diego) had been trying to find a publisher, at that point to no avail. They’d contacted Kyle as a potential editor, but his commitments were too great at that point to agree. He gave me the text (in old-fashioned hardcopy), and I began to read. It was such a pleasure to hear Jonathan’s voice again in my head—erudite, funny, both a scholarly nerd and a total outsider. And I came to think that maybe there was yet a way to have his text see the light of day. It was just too good.

And so I began a quest to find a home for the book. I made contact with Deborah, and she gave permission for me to try to find a publisher. (She and Jann had tried several, but been rebuffed by the usual juried evaluation process at academic presses; the reviews claimed that aspects of the book were too quirky, or “postmodernism” as a topic was already passé.) I noted that a small press, Continuum, had not only published a freewheeling set of essays by a former composition student of mine, but had also put out the popular 33 1/3 series of books on important albums. I wrote to them and there was immediate interest.

The process of ultimate approval took longer than expected (as it always does). Continuum was bought by Bloomsbury, and the project moved into their queue. Thanks to the enthusiasm and support of a young Continuum editor who then transferred to Bloomsbury, Ally Grossan, it eventually received the green light.

Then began the process of editing. In one sense, it was easier than I might have thought. The version of the book I had been given by Gann was essentially complete except for one chapter, which Jonathan had noted needed more work. But once Deborah and I began to dig through his files (many of them in barely accessible earlier versions of Word!), we found that in fact he had basically completed the chapter, plus we found two additional chapters—analyses of Mahler and Nielsen that served as concrete examples of the analytic principles outlined in the book.

Due to the passage of time since the book’s drafting, context needed to be given. Part of this came from an introduction I wrote (which recaps much of what you’ve already read here), plus there is a preface by Jann that describes the intellectual evolution of the project that she observed closely through years of discussion with Jonathan, and a series of essays contributed by his former students, colleagues, and collaborators, covering his thought, music, personality, and legacy (Deborah, Duncan Neilson, John Halle, Martin Bresnick, Brad Garton, and John Luther Adams).

I won’t go into brutal detail about the minutiae of editing. Suffice it to say that it’s far more complex an endeavor than one can ever imagine when one starts. 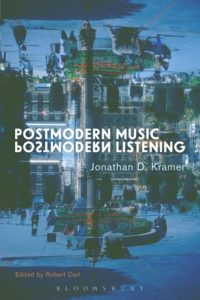 But then it does all get done. And what of the book itself? As most by now will likely agree, “postmodernism” as a musical style is pretty much over. The eclectic, juxtapositional experiments from the 1980s on had the capacity to shock and reorient us to a renewed appreciation of past repertoire, as well as all sorts of traditions outside of Western concert music. But now we seem to be exploring new frontiers, there’s a renewed appreciation of modernism, and things that once were eclectic now have become synthetic. So why reconsider postmodernism? Let’s listen to Jonathan’s own voice, from the book’s Foreword, explaining his strategy and perspective; in it we hear across almost two decades what’s still so important about his thought:

What does it mean to posit that “postmodern music” is not a category? We hear about postmodern music all the time, and you will indeed encounter this term in this book. When I write “postmodern music,” what I really mean is “music exhibiting a substantial number of attributes that readily stimulate a postmodern disposition in composers and/or listeners.” It is pointless to label works simply as postmodern or not postmodern. When we try to do this, we quickly get caught up in a jumble of contradictions, because postmodernism is not one thing. When someone asks me if the piece we just heard is postmodern, I do not like to say yes or no. Most recent pieces, and several older pieces, are postmodern in some ways and not in other ways….

Since I take postmodernism as an attitude, I prefer not to think of it as a historical period. When I write about postmodern aspects of certain pieces of Beethoven, Mahler, Ives, Nielsen, and others, I truly mean that they are compositions that have certain characteristics that listeners of today can understand from the standpoint of a postmodern attitude. I do not mean that these works of the past are precursors of postmodernism. They are as much postmodern as are many works written considerably more recently…

Postmodernism is not a monolithic aesthetic with a consistent agenda. Different composers, different critics, and different apologists use and see postmodernism differently. Hence its categories and subcategories are impossible to delineate rigorously. There are always exceptions. If my prose seems sometimes contradictory as a result of the fuzziness of categories, I accept that as the inevitable result of trying to study an aesthetic one of whose tenets is the embracing of contradiction. From savoring all sides of a contradiction, we can become more accepting, less rigid, and more enriched. Resolving aesthetic conflicts, by contrast, can be stultifying and can discourage further creative thought.

And as I say in my own introduction, postmodernism is a way of experiencing the world. And as a consequence, we begin to experience all art differently. This aspect of the book, certainly the most original, also I feel remains one of the most resonant and enduring in contemporary culture. As we have moved into an age of mass communication and social media, it seems that every act, statement, and product now is subject to an inexhaustible stream of commentary and criticism from anyone who wishes to offer it. More and more, nothing is considered autonomously, but rather in an infinite web of interrelated opinion and judgment. We all experience interconnection and multiplicity continually now, as agents in a stream of infinite experience. Kramer did not live to see this online explosion, but somehow his take on the postmodern seems uncannily adaptable to this development.

And so the second half of the book’s title, Postmodern Listening, is the critical factor. Jonathan shows how our contemporary experience colors and reshapes our audition of everything, from Beethoven to new pieces he never could have encountered. And so the book is not only still relevant; I think it’s prescient.

Finally, one last personal note. In case you didn’t already notice, this is a story of gifts. Jonathan gave me a chance to make music my life. When I discovered this book languishing in limbo, I thought how I might feel in a similar situation (if one can feel anything postmortem). And though I didn’t need to do this for any career reason, it seemed important, even somehow necessary to pay back—to give a gift in return for the one Jonathan gave me at the start of my career. And I say that not to call the spotlight on myself (no matter how proud I may be of the accomplishment, there are many people involved in the process of this “rescue”), but above all to encourage others to think of ways we can increase the health of our culture and community, to give when it’s up to us to do so.