For some, what makes the idea of composers interesting is the mystery surrounding the creative process as they sit in their monastic fortresses of solitude, locked in a bitter internal struggle with the musical maelstrom swirling inside their heads. What interests me, on the other hand, is how composers can do what they do while negotiating innumerable distractions, conflicts, and commitments, all while—most importantly—still being able to find time to have a real life. It may seem overly banal or simplistic, but this facet of the lives of those who create is important not because it demonstrates how different they are from the general public, but because it demonstrates how much they are the same.

One connection that I’ve found among almost every composer I’ve talked to—and here I’m just being safe, since I don’t actually remember anyone stating the opposite—is that they tend to have someone that they can call their partner in one way or another. Spouse, significant other, boyfriend/girlfriend, or just one or more close friends and confidants: No matter the title or level of intimacy involved, when all is said and done, these supporters play a unique role in the music by playing an important one in the life of its creator.

The position these partners take can vary wildly depending on many factors. Some will be involved in some way within the composer’s career. Examples abound of significant others working as the de facto business partner, acting as publisher, publicist, financial analyst, and manager. Others will interact artistically, either as collaborator or foil. There are many composers whose partners are not only performers, but who actively perform their works. Still other composers have partners who are composers themselves, creating a unique relational feedback loop that can be both artistically stimulating and challenging at the same time.
On the opposite end of the spectrum, a partner or close friends whose careers and backgrounds have nothing to do with music or composing can allow composers to disconnect from their vocation for a time. It is all too easy for us to get lost in the minutiae of the music, so much so that we need someone to force us away from the page and pull us back into the world around us. In addition, they can give us not-so-subtle reminders of our humility; getting called to the stage to receive accolades for a newly premiered work can be exhilarating, but it won’t be long before someone provides a reminder that we’re not all that important…and that the garbage still needs to be taken out.

Whatever role these partners play, they cannot be thanked enough for it. The concert reviews won’t mention them, historians will only consider them if there is a scandal, and the audience won’t think twice about them, but it is often those who stand just offstage who provide a vital and necessary component to the birth and growth of much new music.

I was intending to write this week’s column on some substantial aspects of the composer’s place in our society (or rather the invisibility of our profession, if one is to gauge things from the latest NEA statistics), but I’m sure that topic will keep for a later time. Instead, I wanted to reflect on two seemingly unrelated events from the past week—a fire and a conversation—that have demonstrated to me the power of support and encouragement from those around you.

Before I crawled into my dorm bunk last Friday evening, I texted back and forth with my wife for about 30 minutes—we were catching up on what I had been doing here at Interlochen Summer Arts Camp and what she was doing back in western New York state. A few hours later, I woke up to my alarms telling me that I needed to get up early so I could get a head start on some overdue projects. As is my nature, I lazily read through new e-mails and Facebook posts from the night before when I saw that my wife had posted the following image: 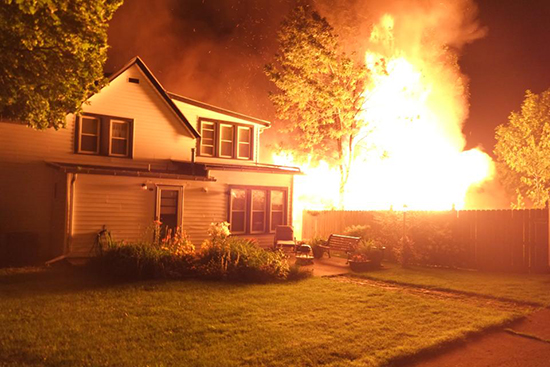 Fast-forward through a couple hours of panic and frayed emotions and life began to calm down again. It turned out that the house next door to my house (which had not had any inhabitants for some time) went up in a huge fire the previous evening; our community’s volunteer fire department was quick to act and saved both our house and the opposite neighbor’s house from destruction. Even though our house was spared major damage, both Lori and I were overcome by the offers of assistance, both physical and mental. We’ve seen major disasters and the relief efforts that follow occur on a yearly basis in this country alone, and it was more than a little surreal to be on the receiving end of such gestures. This support from our local and extended communities meant as much as anything to the both of us and it didn’t take long to realize how essential that mental encouragement is when we are in need.

Several days later, I was bringing one of my private composition lessons to a close when I asked the student, a young woman from Tennessee, what got her interested in composition and what kept her interested in pursuing it. She was a pianist and had never been exposed to contemporary concert music or living composers (male or female), but she was lucky enough to have a teacher who had recognized her creativity and encouraged her to start composing. As we talked, it became clear that it was this teacher’s thoughtful support of her student that acted as tinder, spark, and accelerant for the novice creator.

Whether we are at the beginning of a journey (adventure/career/etc.), experiencing setbacks, losing our way, or making the painful realization that the journey needs to be cut short and a new direction is necessary, one through-line is the importance of support and encouragement from colleagues, friends, family and associates. It’s relatively easy to see this at play in many areas of our community, with composers and performers continually intersecting and collaborating through myriad local and regional projects, but it’s also very easy to find examples of musical and careerist myopia that can numb one to the need for giving honest support and encouragement throughout our cultural and educational systems. If my previous week’s adventures and discussions can act as a reminder, then so much the better.