My original plans for this week’s post were to cover last weekend’s Charlie Parker Festival, but last-minute calls for work dashed them against the rocks (or, in the case of one night, against the rock ‘n’ roll). Then the preparations for the final concert of the “Jazz On the Deck Series” and Fay Victor’s “Herbie Nichols Sung” project took up so much of the time I would have spent working on my post that writer’s block set in. Sometimes I look to the articles and blog posts on NewMusicBox for inspiration, but the two excellent reports—“Wellesley Composers Conference and Chamber Music Center,” by Andrew Sigler, and “Music is Music: The 2013 PARMA Music Festival,” by Osnat Netzer—only deepened my despair about missing the Parker Festival instead. To be honest, the last day’s lineup of August 25 wasn’t missed because of work, but rather because I went to upstate New York to make music with friends whom I don’t get to play with enough lately. I felt that, no matter how inspired we were, I couldn’t justify writing about the private jam session, but then one of the NMBx articles supplied me with the impetus to continue the discussion from last week’s post with a slight recontextualization.

The eleven tracks included in Alexandra Gardner’s “NewMusicBoxMix: The Jazz Edition cover a broad gamut of instrumentation, style, and approach, but the one that is (arguably) the most strongly rooted in the jazz tradition is Wadada Leo Smith’s “Malik Al Shabazz and the People of the Shahada,” from Ten Freedom Summers (Cuneiform, 2012). A Google search on the tune’s parent composition offers the websurfer a link to a Wikipedia article about the piece. The titles of the box set’s 19 tracks mostly relate to themes regarding the struggle for African American civil rights. (Six of them are more general in scope, but still socio-politically focused.) I was reminded that celebrations have been taking place during the last week to commemorate the 50th anniversary of the 1963 march on Washington, D. C. that included Dr. Martin Luther King’s pivotal “I Have A Dream” oration. During this time, when so much is in the news about a continuing and persistent perception of race-based inequality (with scattered nods towards issues regarding gender identification and sexual preferences), I was especially moved by a Democracy Now! broadcast of August 27 that examined the censorship of women’s voices at the 1963 rally. According to the program, only one woman, Daisy Bates, was permitted to speak for longer than a minute. The show’s guest, Cambridge Nonviolent Action Committee of Maryland co-founder Gloria Richardson, was slated to speak, but the microphone was taken from her after she had finished saying “hello” to the crowd. It wasn’t the first time that women were excluded from the debate on civil rights. The World’s Anti-Slavery Convention of 1840, held in London, England, is remembered more for denying seats to all of the women attendees—which included Lady Byron, Elizabeth Fry, Mary Grew, Mary Howitt, Anna Jameson, Abbey Kinder, Lucretia Mott, Elizabeth Neal, Amelia Opie, Ann Green Phillips, Sarah Pugh, Abby Southwick, and Emily Winslow—than for any motions for civil rights actions approved there. That event led to the first Woman’s Rights Convention being held eight years later in Seneca Falls, New York; but still, the Equal Rights Amendment to the United States Constitution, proposed in 1923, has yet to be ratified. So, in 1963, it didn’t matter the level of involvement in the struggle for civil rights one had attained, if you were a women, your voice wasn’t heard that day. The longest microphone time given to a woman at the rally that day probably went to Marian Anderson when she sang “He’s Got The Whole World In His Hands.” One wonders how many women of color besides vocalist Dinah Washington might have terminally over medicated themselves that year. 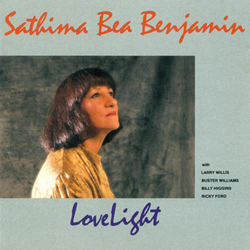 One of the names left out of my post last week was that of Sathima Bea Benjamin, who passed away on August 20, the same day as pianist Marian McPartland. Like McPartland, Benjamin was not born in the United States. She was a native of Johannesburg, South Africa, but relocated first to Paris (after the Sharpeville Massacre of 1960) and then to New York City in 1977. She was a singer who is credited with recording what could have been the first South African jazz record (My Songs For You) with pianist Abdullah Ibrahim (a. k. a. Dollar Brand), whom she would later marry. During the same year as the previously mentioned march on Washington, Benjamin met Duke Ellington while he was performing in Zurich and convinced him to come to see her future husband (Benjamin and Ibriham were married in 1965) perform at a nearby venue. The story goes that after hearing the South African pianist’s set, Ellington insisted on hearing Benjamin sing also. He was so taken with what he heard that he arranged for both of them to be recorded in separate sessions for the Reprise record label. Possibly because she sang jazz standards on her date instead of South African folk music, the Great American Culture Machine didn’t find her “commercial” enough and, while her husband’s session was released almost immediately (Duke Ellington Presents The Dollar Brand Trio, Reprise Records, 1963), hers didn’t surface for over 30 years (A Morning In Paris, Enja, 1996). It’s worth noting that this was better than the fate of her My Songs For You album, which was never released. In fact, the first album of Benjamin’s to be released was African Songbird, which was recorded in South Africa in 1976, just in time for her second expatriation to New York in 1977. This inspired one National Public Radio outlet to use as the title for her obituary, “How One Singer Made Four Debut Albums.” She eventually started her own record label, Ekapa RPM, which produced at least eight of her albums, including the 1982 Grammy-nominated Dedications.

“In My Solitude” Sathima Bea Benjamin and Duke Ellington – 1963 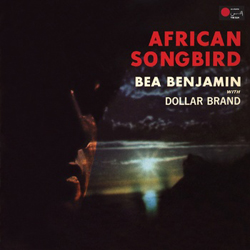 Benjamin spent much of her time working as her husband’s manager and agent, but kept singing and recording, even though she remained largely invisible as an artist. Benjamin was also a political activist who was tireless in her efforts to win equal rights for the indigenous population of South Africa. After being recognized with the Order of Ikhamanga Silver Award by the president of South Africa in 2004 and presented with a Certificate of Achievement for being an “activist in the struggle for human rights in South Africa” by Pen and Brush, Inc. in 2005, as well as being the subject of a 2010 documentary Sathima’s Windsong, Benjamin returned to South Africa in 2011 and passed away there. Our condolences go out to Abdullah Ibrahim and the family of Sathima Bea Benjamin.
[Ed note: For more information, go to Samitha Bea Benjamin’s webpage and the blog page for Matsuli Records (a label which specializes in South African music).]