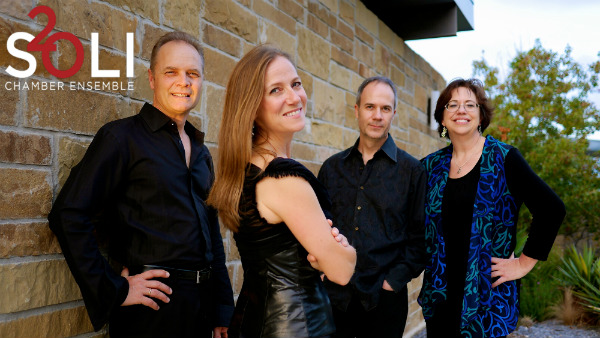 Founded in 1994 as the PRISM quartet,[1] SOLI chamber ensemble has for the past twenty years served as a guiding light for contemporary concert music in and around San Antonio. Winner of the 2013 CMA/ASCAP Adventurous Programming Award, SOLI has commissioned forty new works and premiered each of them for audiences in San Antonio. Though their long-running concert series at Trinity University will continue to be their main base of operations, their recent appointment as resident chamber ensemble at the new Tobin Performing Arts Center (in downtown San Antonio, just a few blocks from the Alamo) puts them in a prominent position to share their music with an even wider audience. In addition, SOLI is also presenting their first CD which features several of the works they have commissioned over the years. This season’s concert series had three distinct programs—Past, Present, and Future—out of which I was able to catch the last. When Caroline Shaw is the senior composer on your program, you know you’re dealing with new music, so I was quite curious to see what SOLI had programmed for the show.
The concert, held in the Ruth Taylor Recital Hall of Trinity University, began with Scott Ordway’s Let there be not darkness, but light. The work was a study in multiple moods which evolved over six or seven minutes. A clangorous opening with chirping single-note sixteenth figures gave way to a slower section with staid and paced piano chords under long lines traded between the strings. The clarinet emerged over this material while hints of the chirping appeared and echoed in the piano. This lead to another section featuring violin, cello, and clarinet exclamations bouncing off of and rising from the piano’s arrhythmic accompaniment, morphing into a sort of ululating texture with everyone (save piano) moving in step before remnants of the opening material closed out the piece.

Guest artist mezzo-soprano Tynan Davis joined the ensemble (sans clarinet this time) for Caroline Shaw’s Cantico delle creature, a work based on text by Francesco d’Assisi and one of the first poems written in the Umbrian dialect of Italian in the 13th century. The work had a calm clarity throughout and seemed in no rush to get from A to B, a quality that felt not static but comfortable and somehow meditative. Often intoning a single pitch, Davis’s performance enhanced these qualities with round pure tones and beautifully shaped lines. It was a work that luxuriated in form more than surface activity, one in which looking for the point of the piece in each line was less successful than letting the whole thing wash over you.

Niccolo Athens’s Piano Trio was a study in tradition, and the three movements were rigorous for both player and listener. The calm, flowing, and wholly tonal opening of the Preludio served well as a bridge from the Shaw, though it upped the ante as it progressed with aggressive tremolo in the strings and deft interplay between strings and piano. The Passacaglia sat large and imposing in the center, occupying the lion’s share of the work, and Athens made good use of its repeating line, often masking it so deftly that, as the movement progressed, I lost track of it. The Scherzo-Finale came along attacca with a strong nod to Bartók’s Concerto for Orchestra both in harmonic language and rhythmic vitality, streams of sixteenths interrupted by tutti announcements of the theme. Taking on these well-worn forms can be a daunting challenge for even the most experienced composers, and my first thought when I saw the program was, “Interesting…this title does not scream ‘new music’.” Having said that, it was very well written, exciting, and enjoyable, and reminded me that new music is, of course, many things.
Following the intermission was Yvonne Freckmann’s Switch. Originally programmed as the closer for the first half, a technical glitch forced a shuffling of pieces, one that could really throw a wrench in the works of a carefully curated evening. However, it was a refreshing change from the formality of the first half, and once the technical issues were squared away (by way of an iMac procured from the bowels of the university) the work commenced. Featuring clarinet and live electronics, Switch also used pre-recorded clarinet, occasionally showing up in choirs to add to the drama. Freckmann joined clarinetist Stephanie Key onstage, occasionally cueing the electronics via the iMac as Key moved across the stage reading the spread-out score. The piece was populated by melodies awash in delay and reverb, occasionally pulling away for an excursion into overblown notes and similar extended techniques[2]. Certainly we’re well past the point where electronic pieces are assumed to be de-facto experimental, but too often I hear works in this world that feel wandering and self-indulgent; pieces in which the material and surface dominate. Fortunately, Switch had a satisfying arc and thoughtful attention to form that kept it out of that category.

Davis joined the entire ensemble for the final work of the evening, the world premiere of Matthew Aucoin’s SOLI-commissioned Celan Songs. In seven movements (three of which were instrumental “fragments”), the songs were each of their own world. The first movement had a disjointed march-like rhythm from which a tutti emerged among the instrumentalists while the second put Davis through her paces in terms of range. Much of the work was somewhat dark and a bit angular, its language and sensibility recalling a European pre-war character (speaking perhaps to Paul Celan’s experience as a holocaust survivor) until the fifth movement. Fully of this century, the bubbling arpeggios and long lines wholly contrasted the other movements while somehow connecting with them via Davis’s voice. My first thought was all raised eyebrows and “what’s all this then?”, but Aucoin made it work. Initially slightly disorienting, this most different movement was in many ways the star of the show (or at least this particular piece) and put me on my toes as a listener.

Achieving the high level of performance and commissioning that SOLI has is one thing, but maintaining it for twenty years is quite another. While we live in a world populated by more and more new music groups, it’s worth noting that SOLI got its start around the same time the internet became a thing. It’s difficult (even for those of us who grew up in those dark days) to remember what it was like to operate in a world without the immediate connectivity those tubes afford us, not to mention the fact that without a great deal of precedent, groups like SOLI had to make it up as they went. Even today there is no boilerplate for making your new music group work, but if you’re looking for a model, SOLI has one for you.