To further showcase the spirit of the community Ear Taxi is organized to celebrate, we asked a diverse roster of local creators to highlight stand out (but quite possibly under-the-radar) aspects of the scene—to pull back the curtain on Chicago for those in the know about new music but maybe a stranger to the city. Add your favorites in the comments or share with us on social media!

Insider Tip: Mana Contemporary—a large, repurposed industrial space in the booming art-loving neighborhood of Pilsen. Mana hosts studios for tons of incredible artists who regularly open their work to the public, as well as experimental dance and music performances.

What Makes Chicago Great: Chicago is a city of welcome. Artists from all over the US (and the world) come here because of the vibrant scene and myriad visible institutions that have long flourished here. Alongside the established arts in Chicago, emerging artists can find a place to explore and test their practice. There is visible activity here at every conceivable level of career development, and at the intersection of most every genre and discipline.

The new music community of Chicago is discursive rather than judgemental. Who you know and what you are affiliated with is less important here than it might be in some other big cities. Young artists have opportunities to show their work and get genuine feedback from older peers, mid-career artists can try out their ideas with an open-minded cohort of ensembles and independent artists.

Part of the reason for this openness is that the midwest is a friendly place. Another reason is that Chicago plays host to a cluster of academic institutions with their doors, students, and faculty open to participating in the wider community. The relative affordability of the city is a not insignificant factor as well. Artists can survive here on less then they can in comparably large US cities, making it easier to find time and space for in-depth, exploratory work. Upon arriving in the Chicago scene (as I did a bit over a year ago) one discovers a community willing to try out ideas and enter into spontaneous, non-strategic collaborations and conversant, musical friendships. Like a real community, which is a wonderful thing.

*
Australian vocalist, researcher, and curator Jessica Aszodi has been praised for her “…virtuosic whimsy” (New York Times) & “…upmost security and power…” (Chicago Tribune), while performing with ensembles, orchestras, opera companies and festivals across the US, Australia, and internationally, in notated conventional, new, experimental, and improvised music contexts.

Insider Tip: There are many art, architecture, film and literary spaces that regularly include new or experimental music in their programming—places like the Arts Club of Chicago, Black Cinema House, Conversations at the Edge at the Siskel Film Center, the Graham Foundation, Renaissance Society, Smart Museum, Stony Island Arts Bank, and Poetry Foundation.

What Makes Chicago Great: Audiences here are terrific. Very supportive, enthusiastic, diverse. They’re not just, or even primarily “music people,” but people from design, video, visual arts and a range of creative fields who want to hear something different, even if they’re not particularly schooled in a tradition. I’m sure that’s partly due to the varied places that include this music in their schedules. Our visiting artists consistently talk about how they’re blown away by the numbers who attend and how they feel the crowd is really focused on what’s going on. I see the same thing at all kinds of shows.

*
Andrew Fenchel is the director of Lampo, which organizes experimental music and intermedia projects.

Chicago is a painfully segregated place, and the new music scene is no exception. With so many national news stories focusing on the violence that plagues the city, visitors can be nervous to tread off the beaten path and away from the shiny, gentrified Loop. But as a recent Chicago-to-D.C. transplant, one of my biggest regrets is that I didn’t spend more time soaking up the incredible programming happening around Theaster Gates’s South Side arts empire. (Sure, I was a far-North-sider without a car, but that’s no excuse.) Check out places like the renovated Stony Island Arts Bank (where they do free tours most Saturdays at 1 p.m.), Black Cinema House, and BING Art Books, where they’ve been hosting musical evenings each Wednesday and will probably have some new stuff going in October. Gates is an inspiring figure in creative placemaking and artist-led, community-focused development.

You should also make a point to see what’s up at INTUIT Gallery for Intuitive & Outsider Art, where composer, guitarist and visual artist Shawn Lucas has been curating an interesting performance series called FLAK. This cozy, transit-accessible gallery venue is one of my favorite places to hear (and perform) new work in Chicago, and FLAK is an exciting example of a functional partnership between a musical curator and a “non-musical” space.

*
After eight years in Chicago, Ellen McSweeney now lives with her wife in Washington, D.C., where she’s working the singing violinist angle and writing a book on musicians, trauma, and loss. Her duo, Handful of Smoke, will release their first album next year.

Insider tip: The Frequency Series at Constellation, curated by Peter Margasak, has been a crucial part of the burgeoning contemporary music scene in Chicago. Peter’s series includes a wide array of styles and presentations of music and sound, which contributes to a more inclusive and nuanced idea of contemporary music.

I love that I can hear wonderful presentations of piano pieces by Feldman one week, then electronic music or a multi-speaker presentation the following week.

*
Olivia Block is a media artist and composer based in Chicago. She creates studio-based compositions, performances for concerts, site-specific sound installations, scores for orchestra and chamber groups, and cinematic sound designs.

Insider tip: Experimental Sound Studio, including its off-site programs like Florasonic and its Creative Audio Archive. Thirty years of programming, production assistance, professional services, and advocacy for exploratory sound art and music. The website says it all, including program descriptions, info on production services, links to media, and access to the Creative Audio Archive.

*
Lou Mallozzi is an interdisciplinary artist, cultural organizer, and educator whose work often deploys sound in performances, installations, improvised music, fixed media works, and others forms of cultural exploration. He co-founded Experimental Sound Studio in 1986 and recently left his position there as executive director. He is on the faculty of the sound department of the School of the Art Institute of Chicago. 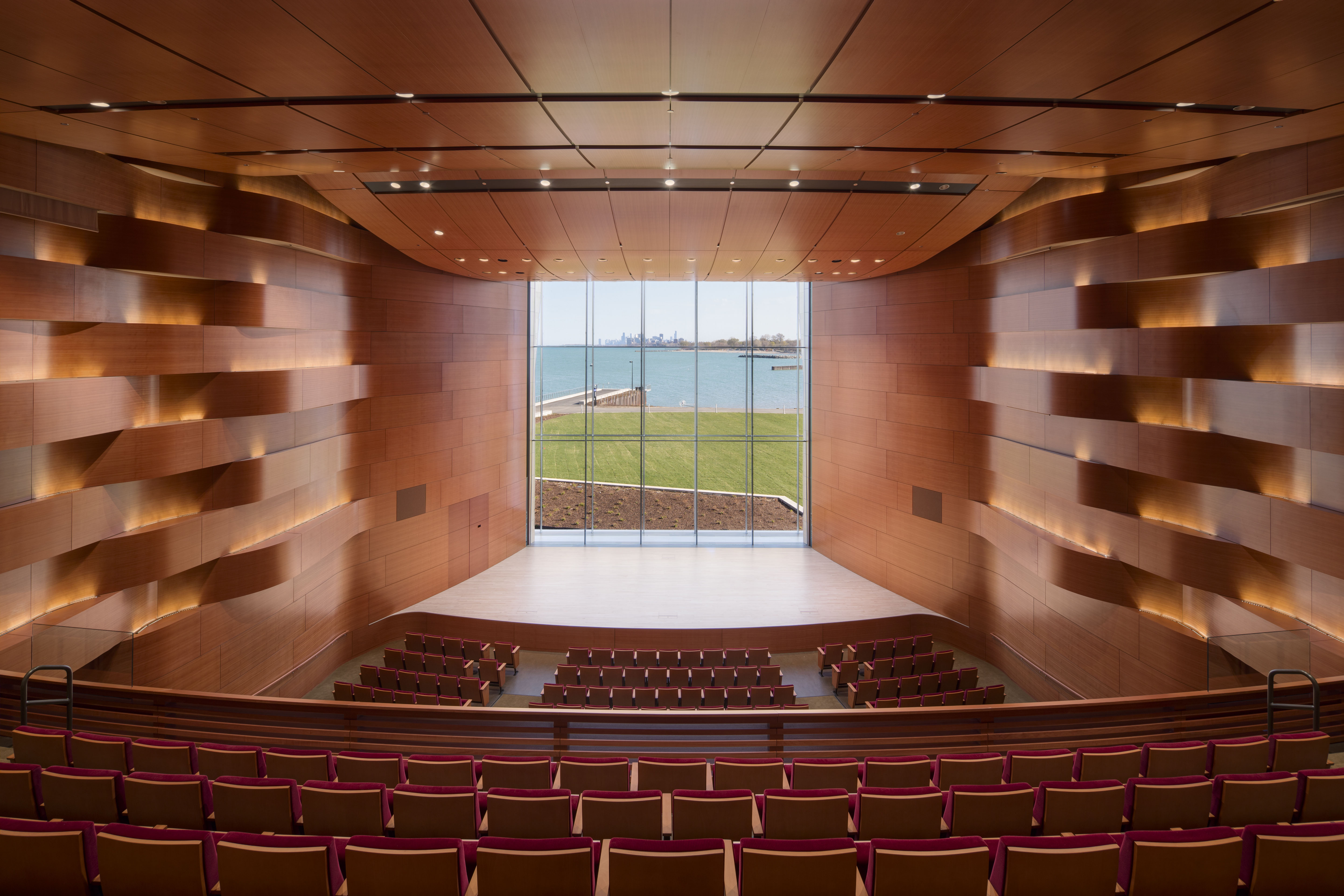 Insider tip: Mary B. Galvin Hall is one of three new performance spaces at Northwestern University, in their recently opened Ryan Center for the Arts complex in Evanston, Illinois. It is an acoustically wonderful hall with a beautiful wooden interior, comfortable seats that hold four hundred people, a large projection screen, and recording capabilities. Better yet, Northwestern has an on-site parking lot that’s free on weekdays after 4 p.m. and all day on weekends, which is a luxury in comparison to parking rates in downtown Chicago. For me, however, the feature that tops the rest is its onstage floor-to-ceiling glass windows with spectacular views of Lake Michigan and the Chicago skyline. Depending on the weather and the time of day, audience members can witness nature’s own performances: seagulls flying, clouds drifting across the sky, the undulations of the water, the changes of color in the sky as dusk approaches, and even fantastic lightning storms (which adds great drama to a concert!). For Northwestern’s talented students, faculty, and guest performance artists, and particularly for concertgoers who live north of Chicago, Galvin Hall is a wonderful addition to Chicagoland’s concert venues.

*
After teaching composition full-time at Roosevelt University for sixteen years, Stacy Garrop stepped down from her position this past spring to begin a freelance career. Her works range from orchestral and choral to a wide array of chamber groups.
NewMusicBox
Written By