Wednesday started off with another public speaking workshop; this time our coach Diane Odash had us practice our pre-concert speeches on the orchestra stage. This was helpful for working out any kinks that might occur, and I felt much more comfortable with my little talk after receiving Diane’s feedback.

Following this were two seminars by James Kendrick, an attorney and the head of Schott Publishing. These were in-depth explanations of copyrights, licensing, commissioning contracts, and negotiating. Mr. Kendrick is an extraordinary resource, and the amount of information he has is truly impressive. Something we can all take away from these sessions is that as composers, we can’t just know our own craft; we also have to be familiar with those legal and business matters that protect our livelihoods and make our survival as working artists possible.

Bill Holab’s session on music engraving and copying was equally packed with important points, and was geared specifically to address matters that had come up in each of our orchestra parts. After feeling pretty good that the orchestra players yesterday had found no issues with my parts, I was taken down a few notches by Mr. Holab, who very helpfully pointed out several engraving issues that I should address in order to make my parts clearer and better from a music copying standpoint.

The highpoint of the harp seminar that followed was when Principal harpist Kathy Keinzle played Salzedo’s Song in the Night for us, (I think that was the piece, if my harp knowledge serves!) demonstrating various extended techniques on her lovely Salvi harp. As a harpist myself, I had a lot of fun hearing her thoughts on orchestral harp writing, and found her approach to the instrument in the orchestral context wonderful.

Finally, we had a short break to get ourselves ready for the Donor Dinner at the home of Gloria and Fred Sewall. This was a lovely event; the house was truly a work of art, having been designed about a decade ago by the eminent architect Charles R. Stinson. As you approached the front entrance, there was a graceful and life-like statue of a leopard looking out onto the side lawn, poised as if to stalk its prey.

Inside the house, the floors were light finish hardwood, playing into the light and airy impression of the interior structure of the home. The large living room featured angular and colorful art, arranged beautifully as if in a museum. To one side of the room was a large black grand piano. (I didn’t get a look at the brand, but it was quite a lovely matte finish.) 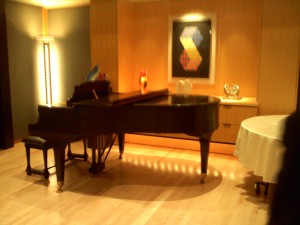 After meeting and mingling with the donors, board members, and the commissioning club who were all in attendance, our hostess Gloria gathered us together so that Michael Hensen, Aaron Jay Kernis, Osmo Vänskä, and finally the six of us participants, could say a few words about the institute and give thanks for the support of these many people.

So when it came time for the six of us to speak, we got a chance to practice our newly sharpened public speaking skills. Michael Holloway started us off, graciously thanking the donors and expressing his appreciation for the virtuosity of the orchestra before describing his piece, Rhythm: Theta Beta Theta, which is based upon brain waves (apparently he was having some work done on his brain and had an EEG which showed him his own Theta and Beta waves, which inspired the piece).

Portuguese-born Andreia Pinto-Correia followed Michael, sharing her very personal and dynamic story about how she came to be a composer. Her piece, Xántara, is about a place in Portugal near Lisbon, whose natural beauty has made it notorious. I went next, describing a little about my background and then saying a few words about my piece, GOD MUSIC BUG MUSIC, whose rather flamboyant and irreverent title demands an explanation. Shen Yiwen was next; his piece First Orchestral Essay, draws some inspiration from Samual Barber. His piece, like mine, is based on a five-note motive; his motive, unlike mine, is an ascending one. He told us that some people have described his piece as an “Americana piece” despite his Chinese roots. Adrian Knight gave a thoughtful and characteristically insightful introduction to his work, Manchester, a title for which he hopes the audience will find its own meaning. Finally, Brian Ciach spoke about his Collective Uncommon: Seven Orchestral Studies on Medical Oddities, a piece inspired by the Mütter Museum, a museum of medical oddities in Philadelphia. Apparently as you enter the museum, you see a 30-foot colon immediately in front of you, then a woman with a nine-inch horn growing out of her forehead, and many other strange medical relics. Brian depicts these oddities sonically with the help of what he describes as “food instruments” amplified macaroni and cheese and cabbage heads. He also uses the voice boxes from Tickle-Me-Elmo dolls to represent the shrunken heads in the museum. These “food instruments” are particularly intriguing because Brian, in addition to being a composer, is a professional chef. The evening ended with a lovely dinner and lively conversation.
NewMusicBox
Written By