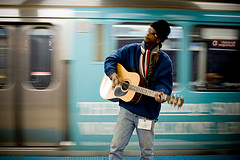 To me it seems as if encountering a performance in an unexpected way automatically embeds it in one’s consciousness a bit more firmly than a prearranged concert. Of course regular concerts can be mind-blowing as well, but the surprise element of, as Wolf says, “discovering someone making a well-intended noise in a corner I hadn’t noticed before” somehow has the capacity to impact a listener in a very direct and substantial way. For instance, out of all the many performances I attended during my studies at the California Institute of the Arts, what do I most remember? Showing up at school late one night and happening upon a group of actors practicing sword fighting in the hallways, accompanied (purely by chance) by a fantastic jazz trio practicing in another nearby hallway. Similarly, when I lived in Barcelona I was always thrilled to hear the amazing gypsy clarinetist making his daily subway rounds, not to mention the occasional outbursts of flamenco percussion on Las Ramblas during weekend afternoons. I never knew when or where a musical happening would appear, but when it did, it never failed to make an impression.

As much as I enjoy attending concerts in the sorts of venues where one would expect to hear music, the delight that buskers and street performances can provide makes me hope that even more composers will take advantage of the possibilities of music making in communal spaces. Although it is not a new idea, it hasn’t been widely implemented, despite the successes of works that have fared well in such a context. Recent examples include Lisa Bielawa‘s Chance Encounter, which has been presented in multiple locations, John Luther Adams’s Inuksuit which has enjoyed both indoor and outdoor performances, and composer James Holt’s recent presentation of Thruline, in which cellists performed the Prelude from J.S. Bach’s Suite No. 1 in G major on every Coney Island bound F-train subway platform. Also, let us not forget the Asphalt Orchestra!

What better way to turn unsuspecting listeners on to new music? While most people probably wouldn’t purchase a ticket to a concert for music they know very little or nothing about, might they stop on a street corner or subway platform to listen to something unfamiliar? What if the answer is yes?

As James Holt writes in a blog post documenting the process of producing Thruline, “I want people to slowly realize, after stepping onto the train and making several stops, that something out of the ordinary is happening and that it is a kind of gift from us to them.”

Or, one could take a more Henry Threadgill approach:

Art can have a reverse effect. It could turn you off and it would still be affecting. It’s making you think about something or do something in a different way than you had been doing things. I move you away from what I’m doing, but I made you look at something else more seriously that you haven’t been paying enough attention to in the first place. People always think that because like art turns people away that that’s the end of it. No, that’s not the end of it.

Although these methods might not be effective everywhere (dammit, Washington, D.C.!), the outside world of unrestricted spaces is a concert setting worth considering.