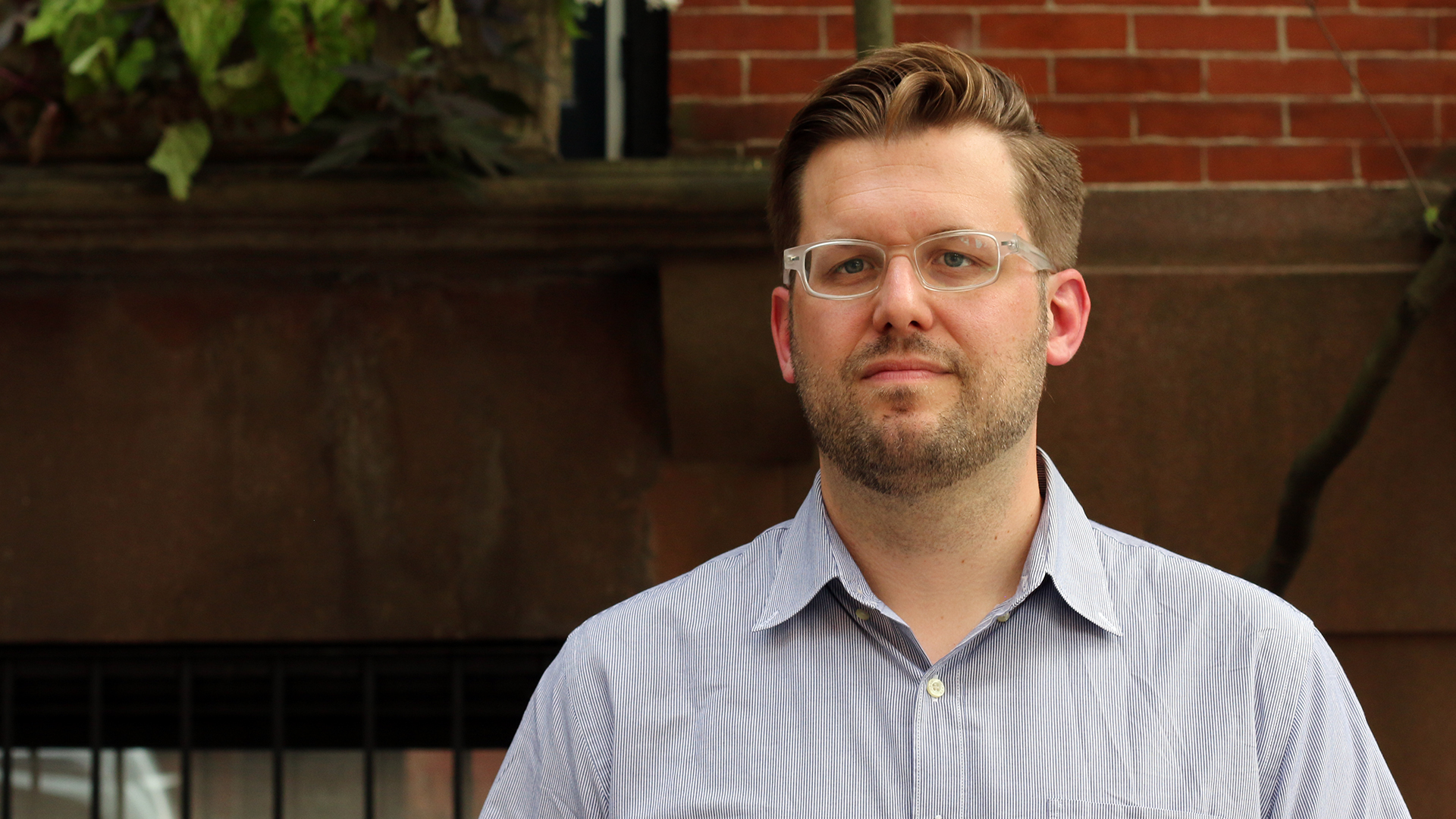 Video presentation by Molly Sheridan
Someone inadvertently picking up a copy of RE:you, Robert Honstein’s debut CD released earlier this year by New Focus Recordings, might initially assume that it’s an indie rock album. The stark plain white cover features only Honstein’s name in small caps in the corner and the large black letters of the title are strewn across the center, the colon an eye-catching green. The back is a similarly minimalist white, only instead of the title, large gray punctuation symbols form an emoticon-like image resembling two people facing one another: “(‘}{‘).” The CD itself does not even feature Honstein’s name; the perimeter is surrounded by exclamation points, the sequence only broken with “RE: you.” Then there are the titles of the eight tracks, listed in the gatefold of the digipack: e.g. “My friend I understand 100%, I have no girlfriend,” “Better find those little blue pills if you plan on giving her more than lip service,” etc.

The initial phrases of the opening track, with their gangly electric guitar and foregrounded percussion, also suggest an alternative pop album, as do the openings of just about every other track. But the vocals never come. Instead, the instrumental textures get manipulated in ways that are more reminiscent of contemporary chamber music. So while this is music that is clearly informed by indie rock songs, it is ultimately something else entirely. In fact, eschewing today’s common parlance where every kind of musical utterance is described as a song, Honstein—when we spoke with him a couple of weeks ago—described these pieces of music as “song-like” compositions. They reference many of the identifiable tropes of songs, but they are not quite songs:

A lot of them are A-B-A and they’re short (though a couple of them do get kind of long), so I think in terms of concision and formal clarity they’re song-like. And also, some of them have this melodic thing that maybe evokes the sense that maybe it is a song. But I didn’t want it to be something so concrete as a song. I wanted it to be more oblique—a little bit strange, a little bit more misleading. In a sense they’re cinematic, I’m just not showing you the film. I don’t want to micromanage your experience.

As for the provocative titles he gave to those eight pieces, they derive from lines that were contained in over a hundred emails sent and received through an online dating site that were then accidentally transmitted to a friend of his. They hint at a dysfunctional and ultimately tragic relationship, but if there’s more to the story, Honstein has no intention of revealing it:

How I came across these emails, who these people are, and what may or may not have happened—that to me is like a footnote. You can read a book and you can read the footnotes or not and you’ll still get something out of it. I don’t personally feel obliged to explain everything; those pieces are intentionally oblique. I’m merely suggesting what might have happened; I don’t want to give the answer. I think that’s a more interesting experience—to be confronted with something without an answer and then fill in your own blanks as to what it means. There is a line between what is for me and what is for the listener.

While the backstory of this usual digital correspondence served as a catalyst for his music, usually the Boston-based composer takes a more intuitive approach when he begins working on a piece. “I try not to think too much when I’m just generating ideas and material,” he claims. “There’s a good chunk of time where I don’t intellectually know what I’m doing and I think that’s important. So, a lot of the time I’ll get pretty far along in a piece and won’t have a clue of what it’s about, but then there’s this simultaneous process where I’m finishing the piece and trying to articulate what is going on.”

But one of the themes he frequently comes back to in his pieces is technology and how it impacts on our lives, which is the obvious subtext for the eight pieces collected on RE:You. The text for his choral piece, Hello World, I love you, emulates how a computer processes the English language using the words “hello world” which were the first ones translated into C programming language back in 1972. The text begins with a sequence of 0s and 1s, then moves onto x86 machine code; eventually the recognizable English words emerge. His orchestra piece 200 OK takes its name from how HTTP queries are served up.

Yet ironically Honstein’s music thus far has been anything but high-tech. Aside from the occasional electric guitar or electric bass, his timbral palette consists predominantly of acoustic instruments. If that somehow seems contradictory, it’s more a by-product of his being attuned to the world we currently live in but not feeling straitjacketed by it. He explains it during our conversation in a 19th-century Brooklyn brownstone where he arranged for us to meet (which somehow felt strangely appropriate):

I’m really interested in responding to the world around me and obviously technology is pretty much embedded in everything we do now. So I can’t ignore it; for that reason I feel compelled to deal with it in what I write. Then the other side to that is that what I think is most interesting about the technology is not necessarily the technology itself, but how we interact with it and how it affects our experiences of emotions, relationships, and being in the world. So rather than writing a piece about technology and then build a fancy robot that is super high tech, I think a poetic impulse is more interesting. The end result is kind of anti-tech because it’s all for older instruments and, in certain respects, it’s old-fashioned.

But if Honstein’s way of responding to the present is to create lush music (albeit in what is frequently a post-minimalist, indie-rock influenced idiom) scored mostly for instruments that many people associate with the past, he has also re-imagined the past in a very contemporary way in other works. In 2007, he arranged a responsorial chant composed a millennium ago by Hildegard von Bingen for soprano, cello, organ, and wine glasses. One of the most unusual projects he has been involved with was creating series of short pieces meant to be inserted in between the six concerti in Antonio Vivaldi’s L’Estro Armonico during a performance by the Sebastian Chamber Players, a New York City-based period instrument ensemble. While Honstein’s predominantly consonant, pulse-oriented steady-state compositional vocabulary would seem an ideal fit with Baroque music (and in keeping with such illustrious precedents as Bang On A Can’s Lost Objects or American Baroque’s collaboration with the Common Sense Composers’ Collective, The Shock of the Old), the end result aimed instead for an “extreme juxtaposition” to maximize cognitive dissonance.

I really didn’t want to compete with Vivaldi, so I had to do the opposite, which led me to the backstory. Here’s this pillar of Western music who wrote a lot of famous pieces, particularly L’Estro Armonico, for these orphaned girls, and they were premiered behind the metal grilles of a church. It’s just so weird to me that that’s where that music came from and I got drawn into that story. So I wound up writing scratch tones and really long glissandi. It sounds like nothing I’d ever written before.

An excerpt from the score for Robert Honstein’s Three Night Scenes from the Ospedale. Copyright © 2011 Robert Honstein, CHM Press. All rights reserved. Reprinted with permission.

Of course, putting new music right next to old music is what happens most of the time whenever a piece of new music is performed by an orchestra, unless it’s written for a contemporary music-focused group like the American Composers Orchestra or the Boston Modern Orchestra Project. Although Honstein’s Rise was among the pieces chosen by the ACO for their Underwood New Music Readings this past June, the other performances he has received for his orchestral pieces thus far, like most composers, have been on programs that consisted predominantly of older, standard repertoire, “right next to Beethoven, Brahms, and Tchaikovsky,” Honstein points out. “But I’m not trying to beat them at their own game; I’m just trying to be true to my own style and my own voice.”

However next season, Honstein, along with five other composers—Timo Andres, Christopher Cerrone, Jacob Cooper, Ted Hearne, and Andrew Norman who together comprise the Sleeping Giant Composers Collective—will rework one of the most treasured masterpieces of the classical music canon, the Mozart Requiem. The project is the centerpiece of an unusual joint composer residency with the Albany Symphony Orchestra funded through Music Alive, jointly administered by New Music USA and the League of American Orchestras.

An excerpt from the score of Robert Honstein’s An Index of Possibility for three percussionists. Copyright © 2012 by Robert Honstein, CHM Press. All rights reserved. Reprinted with permission.